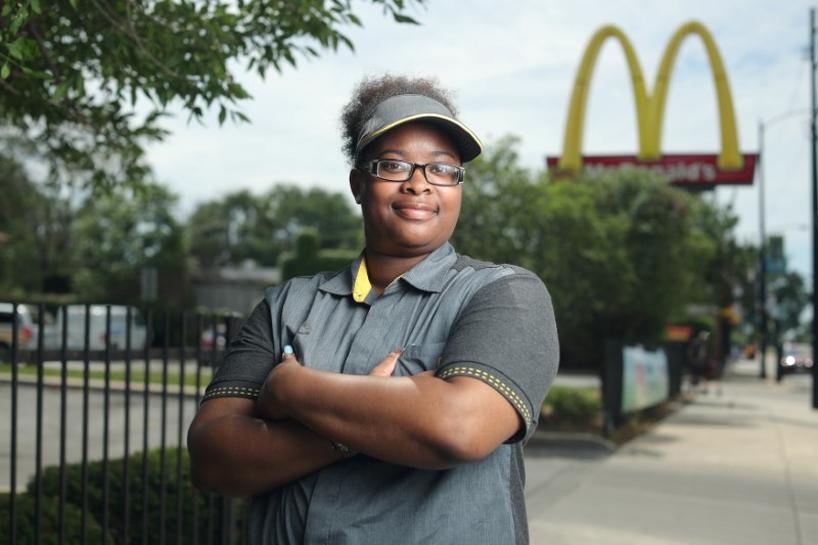 NEW YORK (Reuters) – The text message came as Flavia Cabral walked to a McDonald’s restaurant in Manhattan for her 6 p.m. shift on a May evening. It was from her manager. Business was slow and she was not needed.

Cabral said she was not too surprised. Her work hours fluctuate almost weekly, though losing an entire shift at the last minute happens only once every few months. This time the canceled shift took a $63 bite out of her average $350 gross weekly earnings from two part-time jobs.

“Every week you’re guessing how much money you’re going to get and how many days you’re going to work,” said Cabral, 53, who has been employed at McDonald’s for four years.But a measure of relief is coming for Cabral and 65,000 other New York City fast-food workers whose schedules and incomes often change with little or no notice.

The law, which the restaurant industry vigorously opposed, also requires employers to allow 11-hour breaks between shifts, offer part-time staff additional work before hiring new employees, and pay retail workers to be “on call.” It takes effect late this year.

McDonald’s Corp did not respond to a request for comment.

Nationwide, the issue of scheduling is becoming a new battleground in the fight to boost living standards for low-paid workers, waged largely by the “Fight for $15” movement. The five-year-old, union-backed initiative has already helped convince many jurisdictions, including New York state, to raise minimum wages.

In Oregon, a bill that would set regular scheduling for workers at large food service, hospitality and retail companies is awaiting the governor’s signature. Similar bills are pending in five other states.

Not only do fluctuating schedules wreak havoc with tight household budgets, they make it difficult to make appointments, arrange child care and plan family time, workers point out.

“There’s no way you can stay in business,” said Meyer, whose company employs 1,000 workers at about two dozen franchised Wendy’s and TGI Friday’s in New York. “It’s like having a disease. It’s going to get you sooner or later.”

Workers at McDonald’s, whose restaurants are mostly franchised, said weekly schedules are usually posted a day or two before they take effect. Still, they say they are often told at the last minute not to come to work or to punch out early.

“You could only have been on the clock for two hours and they’ll tell you to go home,” said Ashley Bruce, 22, who has worked for four years at a McDonald’s on Chicago’s South Side. The Chicago City Council is considering a scheduling bill that would cover 450,000 hourly workers.

Variable scheduling began cropping up in the 1970s as companies sought to maximize profits to better attract investors, according to University of Chicago Associate Professor Susan Lambert, who studies scheduling practices.

“They’re really looking at those labor budgets,” she said. “So, that puts enormous pressure on managers to really keep close track of how many hours you’re using and how sales are going.”

Some use sophisticated “workforce optimization systems” to analyze sales, weather and other factors to determine how few workers they need to remain profitable at a given moment, Lambert said.

Although fluctuating schedules affect mostly lower paid workers, it is a management strategy that is starting to affect higher paid jobs as well, as companies seek to transfer the risk of unsteady revenue to their employees.

The New York City scheduling law was passed with strong support from unions, including Local 32BJ of the Service Employees International Union, even though almost all fast-food workers are not unionized.

“Our members enjoy these rights under the contract,” he said. “But if other workers don’t enjoy them, it’s just a matter of time for an employer in a building or in a cleaning company to say, ‘Wait a minute, why do you guys need advance notice of scheduling?'”