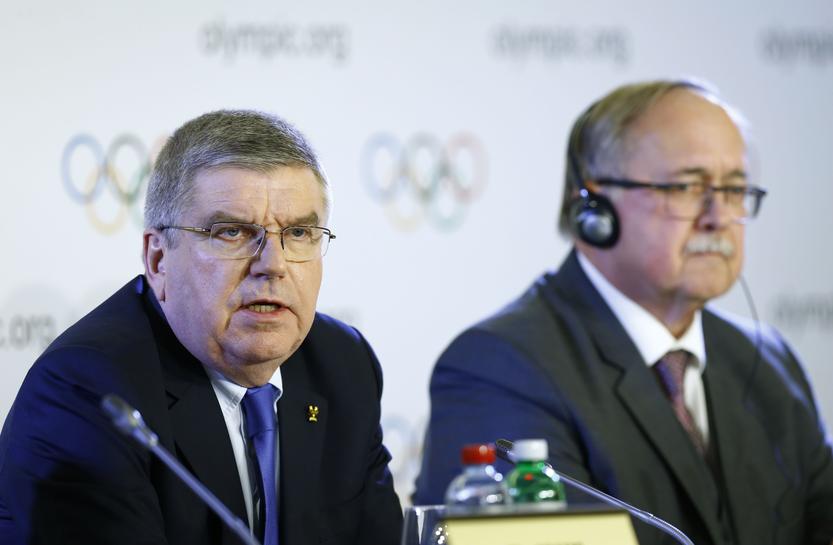 LAUSANNE, Switzerland (Reuters) – Russia has been banned from the 2018 Pyeongchang Winter Olympics after the IOC found evidence of an “unprecedented systematic manipulation” of the anti-doping system that has led to a series of suspensions for the country’s athletes in recent months.

The International Olympic Committee (IOC) did not impose a blanket ban on Russia ahead of the Rio 2016 Summer Games but said on Tuesday that the evidence unearthed by the Schmid Commission made the doping situation impossible to dispute.

It therefore suspended Russia, which finished top of the medals table at its own 2014 Winter Olympics in Sochi, from next year’s Games in South Korea that run from Feb. 9-25

However, in a bid to protect “innocent athletes” the door has been left open for Russians to compete as an “Olympic Athlete of Russia”, as long as they satisfy strict conditions that show they have a doping-free background.

The IOC also decided to suspend Russian Olympic Committee (ROC) president Alexander Zhukov as an IOC member, while Russian Deputy Prime Minister Vitaly Mutko, sports minister at the time of the Sochi Games, was also banned from any future participation at the Olympics.

Former Switzerland President Samuel Schmid told a news conference his report focusing on allegations of government involvement in Russian doping at the Sochi Games confirmed “the systematic manipulation of the anti-doping rules and system”.[nL4N1E44IG]

The results were not based only on testimony by Russia’s former anti-doping chief-turned-whistleblower Grigory Rodchenkov. [nL8N1O56Q9] There was also scientific evidence, witness statements documents and correspondence, he said.

“The facts are that in Russia there was systemic manipulation of doping and the anti-doping system… that also took place at Sochi 2014,” added Schmid.

IOC President Thomas Bach said: ”Today we gave the Russian delegation the opportunity to express themselves. In this meeting this afternoon the president of ROC (Russian Olympic Committee) has apologized.

“As a former athlete I am feeling very sorry for all the clean athletes who are suffering from this manipulation… but because we are allowing clean athletes to participate they can set about building a bridge for the future (rather) than erecting a new wall between Russia and the Olympic movement.”

Zhukov described the IOC decision as contradictory. “There are positive and negative sides,” he said. “The IOC has allowed all clean athletes in all sports.”

Other Russians were more forthright, with Alexei Kravtsov, president of the Russian Skating Union, saying: ”The decision is offensive, insulting and completely unjustified.

“I consider that this decision will deal a great blow to the whole Olympic movement.”

Alexei Kurashov, president of the Russian freestyle federation, added: ”The Olympic movement has discredited itself and there will be fundamental consequences to this.

“These are not the principles of Olympism. I can’t say that the activities of the IOC are honest.”

Samuel Schmid, Chair of the IOC Disciplinary Commission, and Thomas Bach, President of the International Olympic Committee, attend a news conference after an Executive Board meeting on sanctions for Russian athletes, in Lausanne, Switzerland, December 5, 2017. REUTERS/Denis Balibouse

“The International Olympic decision to ban Russia from the 2018 Winter Olympics is a welcome step in serving justice to Vladimir Putin’s government for its elaborate doping scheme in 2014,” he said in a statement.

“Today’s announcement sends an important message to Putin’s Russia that being a member of the international community means abiding by rules, norms, and standards – and that anything less will not be tolerated.”

The IOC’s decision comes 18 months after it decided not to impose an outright ban on Russian athletes ahead of Rio and told international sports federations to decide individually on the participation of Russians at the Olympics in Brazil.

While all of Russia’s track and field athletes bar one and the weightlifting team were banned from Rio, about 70 percent of Russia’s original 387-strong squad took part at those Games.

Bach said on Tuesday, however, that the situation was different now.

“(Ahead of Rio) there was no opportunity to hear the Russian side and at the time of Rio it was mainly about the failure in the Moscow lab. Now it’s about the manipulation of an Olympic lab. The conditions then and now are totally different.”

The Schmid report said the IOC had “not found any documented, independent and impartial evidence confirming the support or the knowledge of this (anti-doping manipulation) system by the highest State authority” after Richard McLaren’s independent report for the World Anti-Doping Agency (WADA) had said the Russian government and secret service were involved.

McLaren’s report in 2016 found more than 1,000 Russian competitors in over 30 sports had been involved in a conspiracy to conceal positive drug tests over a five-year period. [nL4N1E43RC]

In the last month, the IOC’s own commission has banned more than 20 Russian athletes from the Olympics for life over doping violations at the Sochi Games, while the country’s athletics federation remains banned from that sport.

McLaren welcomed Tuesday’s decision, saying: ”By holding Russia accountable for its actions, which date back at least to the (2012) London Games and continued through the Sochi Games, the sports community is demonstrating its commitment to ensuring athletes benefit from an even playing field and drug-free competition.

“This decision further confirms the conclusions of my investigation, and I wish to thank all those who helped me with my work — some of whom did so at great personal risk.”

World Anti-Doping Agency president Craig Reedie said the IOC had taken an informed decision to sanction Russia for its involvement “in institutionalized manipulation of the doping control process before, during and after the 2014 Sochi Olympic Games”.

Travis Tygart CEO of the United States Anti-Doping Agency said: “Over the past three years, a high stakes game of chicken has been played between those willing to sacrifice the Olympic ideals by employing a state-directed doping program to cheat to win and, on the other side, athletes unwilling to stand silent while their hopes and dreams were stolen and the Olympic Games hijacked. Today the IOC listened to those who matter most – and clean athletes won a significant victory.”

The decision comes seven months before Russia hosts the soccer World Cup, though Bach declined to comment on what, if any, impact Tuesday’s decision might have on that tournament.

Writing by Mitch Phillips in London; Additional reporting by Gabrielle Tetrault-Farber and Vladimir Soldatkin in Moscow, Brian Homewood in Lausanne and Rory Carroll in Los Angeles; Editing by Ken Ferris

Thai PM Prayut vows to carry on despite calls to quit
Workers’ Party takes over management of Sengkang GRC
Protesters return to Bangkok streets to pressure PM
More than 400 people dine on parked Singapore Airlines planes as part of A380 restaurant experience
Commentary: No worker is untrainable. Employers have to step up to help