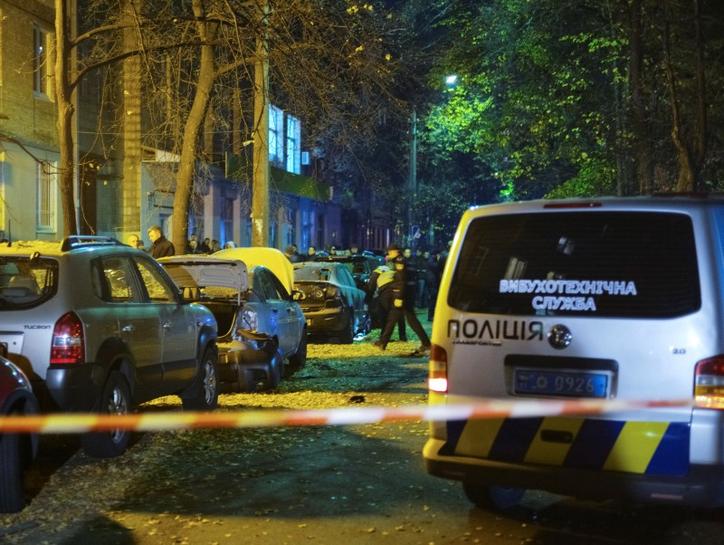 KIEV (Reuters) – An explosion in Kiev on Wednesday killed one man and wounded three others including Ukrainian lawmaker Ihor Mosiychuk, an Interior Ministry official said in a post on Facebook.

Investigators work at the site of a car explosion in central Kiev, Ukraine October 25, 2017. REUTERS/Gleb Garanich

Ministry adviser Zoryan Shkiryak said investigators were at the scene of the incident, where it appeared a motorcycle had been blown up near the entrance to a TV station.

“Altogether four people were wounded in the explosion. Unfortunately, one could not be saved. He died on the way to the hospital from the wounds he received. This man is around 30 years old and his identity is being confirmed,” he said.

Mosiychuk, a member of the opposition, nationalist Radical party, did not suffer life-threatening injuries, his press service said.

Kiev police spokeswoman Oksana Blyshchyk said at 1905 GMT that authorities had received information about a car explosion in the Solomensky district of Kiev. There was no immediate word from police on possible suspects or a motive for the attack.

Radical party lawmaker Evhen Deidei posted photos on his Facebook page that showed the burnt-out shell of a motorcycle in front of a blast-hit vehicle. “Judging by the damage to the car and the shrapnel holes in the doors, the power of the explosion was pretty strong,” he said.

“There is a lot of blood on the stairs, where Ihor was situated at the time of the explosion.”

The interior ministry’s Shkiryak said political analyst Vitaliy Bala was one of the three wounded in the blast.

Collaboration, openness important for air traffic management across region: ICAO
99 of 100 cities most at risk environmentally in Asia
US warns China will use Olympics to gloss over abuses
Asia shares wallow near one-month lows on inflation anxiety
Malaysia to ban all interstate, inter-district movement without police permit for 4 weeks