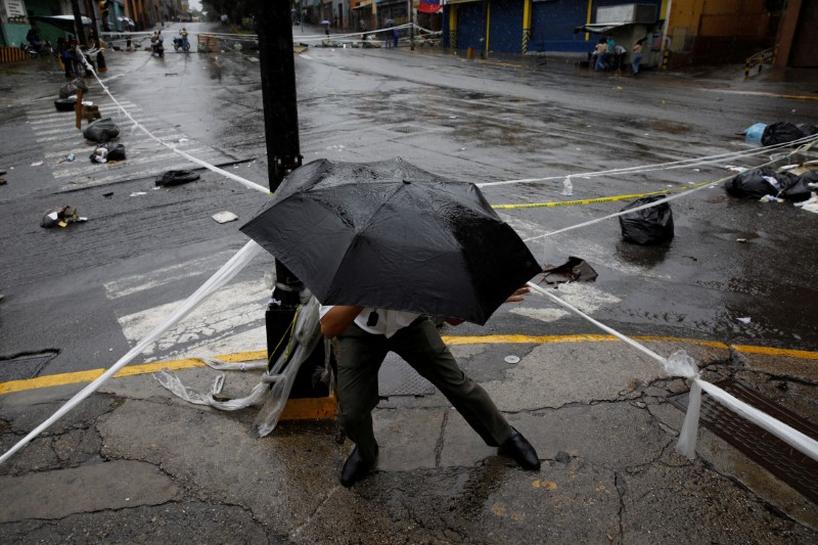 CARACAS (Reuters) – Foes of Venezuela’s unpopular President Nicolas Maduro are calling for a national shutdown on Thursday to demand a presidential election and the abandonment of a new congress they fear would cement dictatorship.

The majority-backed opposition want Venezuelans to close businesses, halt transport and barricade streets as part of a civil disobedience campaign they have called “zero hour” to try and end nearly two decades of Socialist Party rule.

Student and transport groups said they would heed the call and many small businesses vowed to stay shut. Neighbors coordinated blocking off streets and families planned to keep children behind doors in case of trouble.

“I’ve no doubt Venezuelans will paralyze the nation in rebellion,” opposition lawmaker and street activist Juan Requesens told Reuters of the strike planned for 24 hours from 6 a.m. (0600EST) across the oil-producing nation.

“The dictatorship wants to impose an illegal Constitutional Assembly by force to perpetuate itself in power,” Requesens added of the government’s plan for a July 30 vote for a legislative super-body that could re-write the constitution.

Bosses at state-run companies – including oil company PDVSA which brings in 95 percent of Venezuela’s export revenue – ordered nearly 3 million public employees to ignore the strike. No oil disruptions were expected.

With Venezuela already brimming with shuttered stores and factories amid a blistering economic crisis, even a successful strike would have limited financial impact.

Pedestrians and a motorcyclist pass through a barricade during a rally against Venezuelan President Nicolas Maduro’s government in Caracas, Venezuela, July 19, 2017.Carlos Garcia Rawlins

“Most Venezuelans want to work,” Maduro’s son, also called Nicolas and a candidate for the Constitutional Assembly, told local radio. “I’m sure it will fail.”

A similar opposition strike call last year had a lukewarm response, amid government threats to seize any closed businesses. But Maduro’s critics have gained momentum since then.

Anti-government protesters have been on the streets for nearly four months and Maduro faces widespread foreign pressure to abort the Constitutional Assembly which officials have said would replace the current opposition-led legislature.

U.S. President Donald Trump weighed into the dispute this week, threatening economic sanctions if the assembly goes ahead. The opposition is boycotting the July 30 vote which has complicated rules seemingly designed to guarantee a government majority despite its minority popular support.

Recalling a 36-hour coup against his charismatic and far more popular predecessor Hugo Chavez, the Venezuelan president has said his foes are seeking to oust him by force.

Venezuela’s opposition is also demanding freedom for more than 400 jailed activists, autonomy for the legislature, and foreign humanitarian aid. Some 100 people have died in anti-government unrest since April.

Jewel Changi Airport, Terminals 1 and 3 to be closed to public as COVID-19 testing continues
4 new COVID-19 cases, including Grab driver, test ‘preliminarily positive’ for B1617 variant from India
Malaysia to be placed under another nationwide MCO from May 12: PM Muhyiddin
China Tries Online Activists Who Saved Censored Coronavirus Posts on Github
WHO classifies India COVID-19 variant as being of global concern