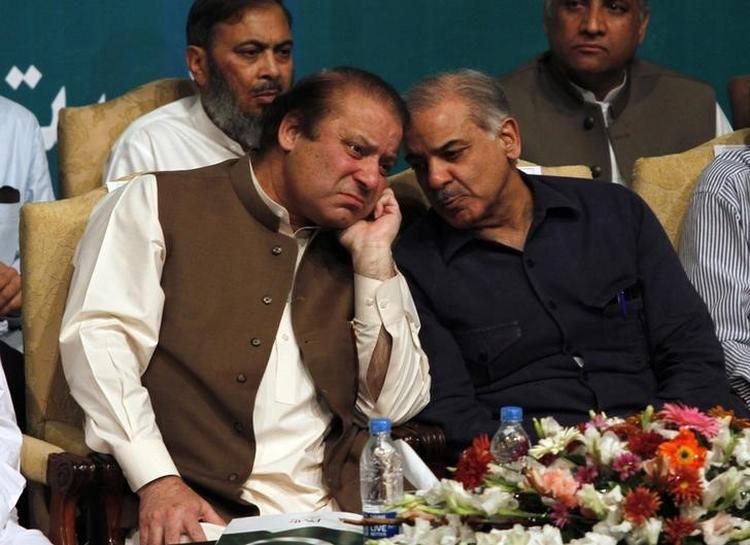 ISLAMABAD (Reuters) – Ousted Pakistani Prime Minister Nawaz Sharif announced plans on Saturday for his brother Shahbaz to take over as leader of the country and lashed out at the Supreme Court ruling that barred him from office.

Shahbaz must contest a by-election for parliament to become eligible to take the reins, so the outgoing Sharif also nominated staunch ruling party ally Shahid Khaqan Abbasi to serve as interim prime minister for at least 45 days.

Sharif’s Pakistan Muslim League-Nawaz (PML-N) party has a strong majority in parliament so should have no problem getting its choices confirmed when the chamber convenes to elect a new premier. Local television said the session would begin on Tuesday.

For now, Pakistan has no leader, creating uncertainty at a time the nuclear-armed country is enjoying a rare period of relative stability, with militant attacks slowly declining and the economy growing at its fastest pace in a decade.

An eventual transfer of power from Sharif to his brother would, however, still mark a relatively smooth transition for Pakistan, which has been plagued by political chaos and frequent army interventions since it was founded 70 years ago.

“Political parties don’t have democracy in them. They are family parties … Actually, it’s like a form of monarchy,” Khan told Reuters in an interview.

Dynastic politics have a long history in Pakistan, though no prime minister has completed a full term since independence from British colonial rule in 1947.

Sharif, whose (PML-N) party won a majority in parliament in 2013, said he was dumbfounded by Friday’s Supreme Court ruling disqualifying him from office over unreported income from a company owned by his son in Dubai.

The court also ordered a criminal investigation into Sharif and his family.

Sharif has said the monthly salary – equivalent to $2,722 – was nominal and he never actually received any of it, describing the court case as a political vendetta by Khan and its verdict as judicial overreach.

“My conscience is clear,” he said in his first public comments since resigning on Friday after the ruling.

He stressed that the court did not prove any corruption or siphoning off of public money after months of investigations stemming from last year’s “Panama Papers” leaks that said his children were linked to offshore companies.

Still, Sharif said he would no longer seek public office and urged supporters to back his brother, who is chief minister of Punjab province, as long-term successor.

“I have quit my office, so someone has to take it, and after a lot of consultations … Shahbaz Sharif is nominated,” Sharif said in a speech to PML-N party members.

Abbasi, Sharif’s nomination for interim premier, was petroleum minister in his last cabinet

Sharif said he would continue fighting for Pakistan’s constitution, but did not mention the powerful military as playing any role in his dismissal. A day earlier, a senior Sharif ally hinted that military elements had been involved.

“We know very well what the crime of Nawaz Sharif and the Muslim League is. What do we ask for? We ask for civilian supremacy in Pakistan,” Railways Minister Khawaja Saad Rafiq told a news briefing on Friday.

Michael Kugelman, a South Asia specialist at the Woodrow Wilson Center, said even without Nawaz Sharif, his party completing its term until new elections would mark a sign of democratic progress.

“Gone are the days when we would expect the military to swoop in as the saviour to restore order,” he said.

Still, in Pakistan, suspicions of military string-pulling are never hard to find.

Sharif’s two previous stints in power were also cut short, the second ending in a military coup led by General Pervez Musharraf in 1999.

Initially placed under house arrest, Sharif went into exile before returning to win a resounding victory in 2013 elections.

The army has not commented on Sharif’s departure, or on allegations they were involved. It has also dismissed claims in the past that they were behind the Supreme Court’s push.

Shahbaz Sharif has been in charge of Punjab since 2008, building a reputation as a competent administrator focused on infrastructure. He also has better relations with the military than his brother.

Abbasi, a businessman and founder of an airline, has been at Sharif’s side for decades and was jailed after the 1999 coup.

He has been tasked with Pakistan’s ambitious plans to build liquefied natural gas infrastructure to end frequent blackouts blighting everyday life in a nation of 190 million people.