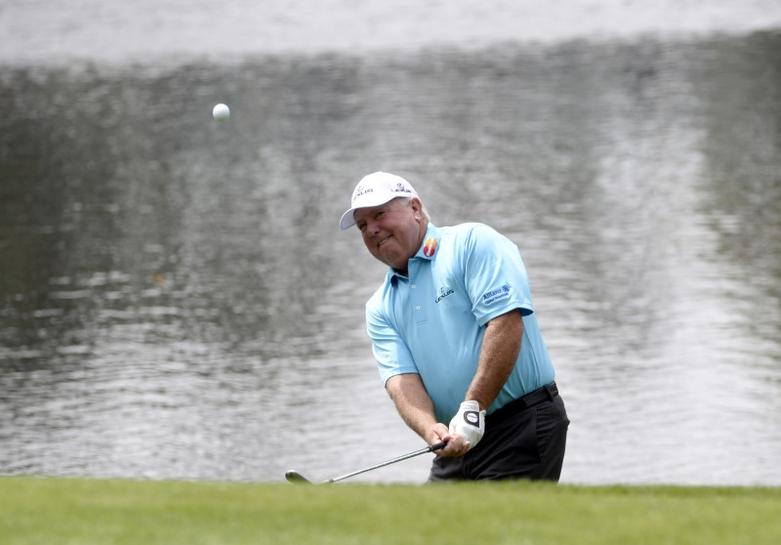 SOUTHPORT (Reuters) – Former champion Mark O’Meara made the worst possible start when he sent his opening tee shot out of bounds as the American veteran got the 146th British Open underway in cold and wet conditions at Royal Birkdale on Thursday.

The 60-year-old, who won the tournament when it was staged on the course in 1998 and is playing his 30th Open, sent his opening drive well wide of the fairway as play started promptly at 6:35 a.m. local time.

O’Meara was accompanied by compatriot Ryan Moore and England’s Chris Wood, who finished fifth and won the silver medal as leading amateur when Birkdale last staged the tournament in 2008.

The rain made for what look likes testing conditions on the links course which lies on England’s north-west coast.

The 2008 champion Padraig Harrington was due out at 9:36 a.m., just before the defending champion, Sweden’s Henrik Stenson, who plays with American Jordan Spieth and South Korea’s Kim Si-woo.

Local hope Tommy Fleetwood, who is in form and favored to become the first British golfer to win the tournament on this course, tees off at 10:09 a.m. alongside Japan’s Hideki Matsuyama and U.S. Open champion Brooks Koepka.

The 2014 champion Rory McIlroy, who has missed three missed cuts in his last four starts, tees off at 2:48 p.m. alongside world number one American Dustin Johnson and South Africa’s Charl Schwartzel.