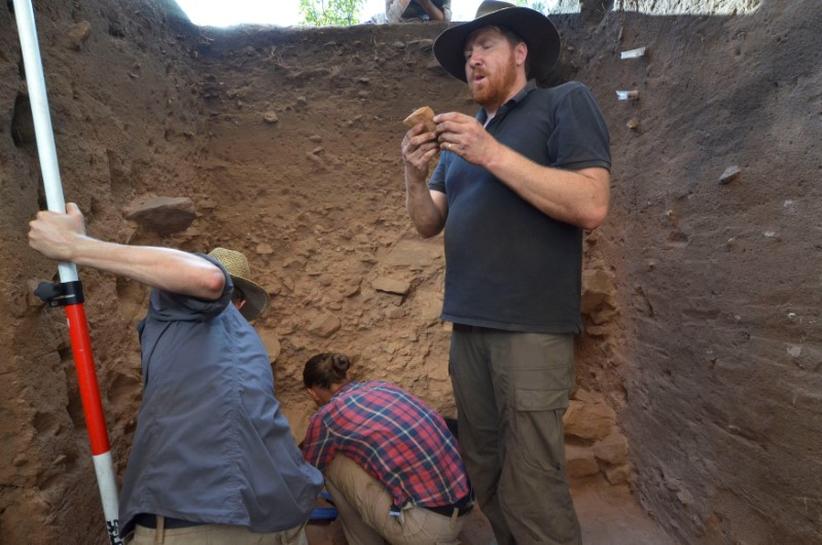 SYDNEY (Reuters) – Axheads and grinding stones from a cave in Australia’s far north suggest humans arrived on the continent about 65,000 years ago, or 18,000 years earlier than previously thought, according to research published on Thursday.

A technique called luminescence dating was used to date the ancient tools which were found in a rock shelter at the bottom of a cliff, on the edge of a sandy savannah plain some 300 km (186 miles) east of Darwin.

Finding of a new minimum age for the arrival of humans in Australia pushes back the origins of aboriginal culture, the world’s oldest continuous civilization, from a previously agreed consensus of around 47,000 years ago.

A supplied image shows an edge-ground hatchet head after it was excavated at the Madjedbebe site located in the Kakadu region in northern Australia, July 10, 2012 which has revelead that humans reached the country at least 65,000 years ago – up to 18,000 years earlier than archaeologists previously thought. Chris Clarkson-Gundjeihmi Aboriginal Corporation/Handout via REUTERS

“Because Australia sits at the end of this migration route, we can now use this as a benchmark, and use it to say that people must have left Africa earlier than this,” he said.

Clarkson’s paper was published in the journal Nature, which last month turned the understanding of human origins on its head, with a study showing fossils discovered in Morocco to be 300,000 years old, about 100,000 years older than any other human remains previously found.

The Australian study used both radio-carbon dating, which reaches its limits at around 50,000 years, and luminescence, which uses laser beams, to date 28,500 individual grains of sand from the site, which sits on a Rio Tinto uranium mining lease in the Northern Territory.

“Previous excavations, they didn’t have the access to the dating methods that we do these days to actually confirm that the deposits and the archaeology really were that old,” said Andy Herries, Associate Professor of Paleoanthropology and Geoarcheology at La Trobe University in Melbourne, who was not part of the study.

“The problem previously was that there was some old dates and stones but it was just a couple of them, whereas this research shows a significant occupation,” he said.