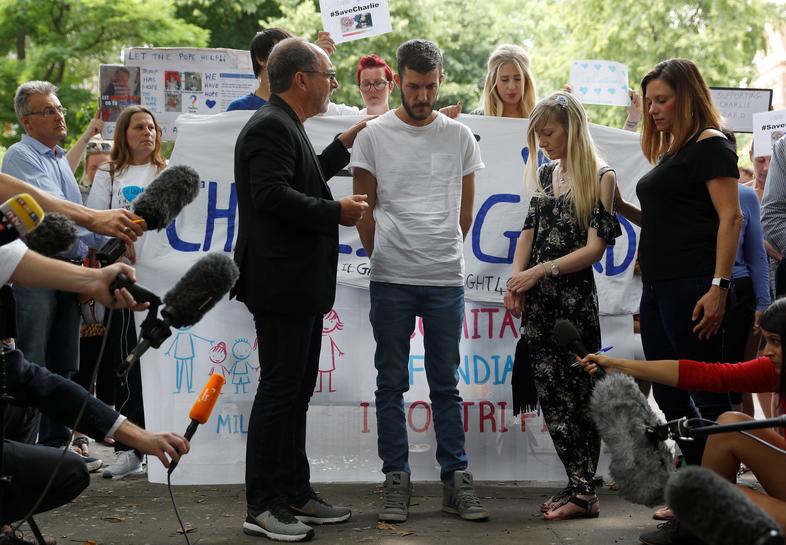 LONDON (Reuters) – The parents of critically-ill British baby Charlie Gard, whose fate has captured global attention, return to London’s High Court on Monday where a judge is set to hear final arguments as to why a hospital should not turn off the boy’s life support.

Charlie has a rare genetic condition causing progressive muscle weakness and brain damage and his parents have been fighting a legal battle to send him to the United States to undergo experimental therapy.

However, Britain’s courts backed by the European Court of Human Rights have refused permission on the grounds it would prolong his suffering without any realistic prospect it would help the 11-month-old child.

A final two-day hearing is due to begin on Monday after which Judge Nicholas Francis will decide whether the boy’s parents, Connie Yates and Chris Gard, can take Charlie to the United States for treatment by Michio Hirano, a professor of neurology at New York’s Columbia University Medical Center.

The case has attracted interventions from U.S. President Donald Trump and Pope Francis, who have both voiced support for Charlie, and led to a fierce debate about medical ethics and whether the hospital treating the child or his parents should determine his fate.

On Saturday, Mary MacLeod, chairman of Great Ormond Street Hospital (GOSH) where Charlie is being treated, said thousands of abusive messages including death threats had been sent to staff while families of other sick children had been harassed.

“We fully understand that there is intense public interest, and that emotions run high,” MacLeod said. “However, in recent weeks the GOSH community has been subjected to a shocking and disgraceful tide of hostility and disturbance.”

Previous court hearings have witnessed moments of tension and anger between GOSH’s lawyers and Charlie’s parents, but Yates said they had never condoned any threatening or abusive remarks towards the hospital’s staff.

“We are extremely upset by the backlash we have received after Great Ormond Street Hospital put out their statement,” she said. “Like them we have been shocked by some of the public response to this case and agree with them that it is disgraceful that doctors have received death threats.”

Monday’s hearing will be told the details of a meeting between Hirano, who flew to Britain last week to examine Charlie, and other medical experts involved in the case.

Hirano believes there is at least a 10 percent chance his nucleoside therapy could improve the condition of Charlie, who cannot breathe without a ventilator, and that there is a “small but significant” chance it would help aid brain functions.