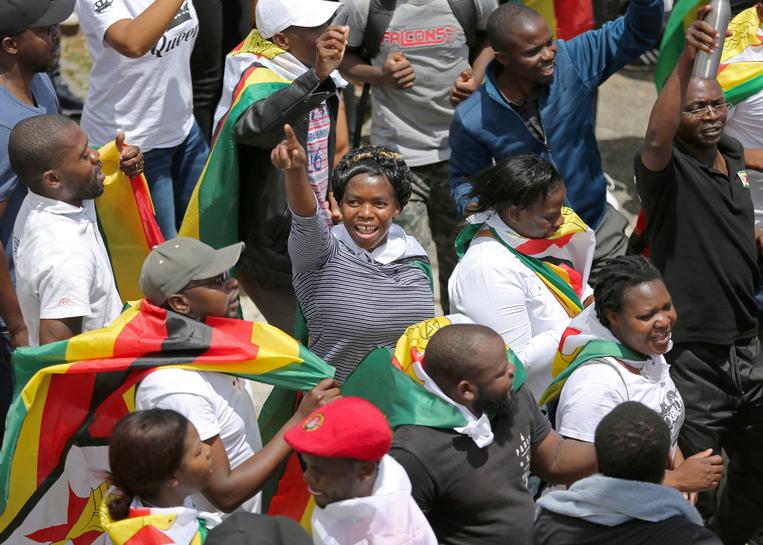 The sources said a party central committee meeting scheduled for 10:30 a.m. (3.30 a.m. ET) would also dismiss 93-year-old Mugabe’s preferred successor, his wife Grace, from her role as head of the ZANU-PF Women’s League.

Mugabe’s 37-year rule has been effectively at an end since the army seized control on Wednesday, confining him to his residence, saying it wanted to target the “criminals” around him.

Shortly after the sources revealed the meeting, a motorcade left Mugabe’s official residence in the capital Harare to boos and jeers from onlookers, although a security said Mugabe was not inside.

Hundreds of thousands of people had flooded the streets of Harare singing, dancing and hugging soldiers in an outpouring of elation at Mugabe’s demise, while others marched towards his residence.

In scenes reminiscent of the downfall of Romanian dictator Nicolae Ceausescu in 1989, men, women and children ran alongside the armored cars and the troops who stepped in this week to oust the only ruler Zimbabwe has known since independence in 1980.

Under house arrest in his lavish ‘Blue Roof’ compound, he has watched support from his ZANU-PF party, security services and people evaporate in less than three days.

Mugabe’s nephew, Patrick Zhuwao, told Reuters the elderly leader and his wife were “ready to die for what is correct” rather than step down in order to legitimize what he described as a coup.

Speaking from a secret location in South Africa, Zhuwao said Mugabe had hardly slept since the military took over but his health was otherwise “good”.

On Harare’s streets, Zimbabweans spoke of a second liberation for the former British colony, alongside their dreams of political and economic change after two decades of deepening repression and hardship.

“These are tears of joy,” said Frank Mutsindikwa, 34, holding aloft the Zimbabwean flag. “I’ve been waiting all my life for this day. Free at last. We are free at last.”

Mugabe’s downfall is likely to send shockwaves across Africa, where a number of entrenched strongmen, from Uganda’s Yoweri Museveni to Democratic Republic of Congo’s Joseph Kabila, are facing mounting pressure to step aside.

The secretary-general of Zimbabwe’s War Veterans Association, Victor Matemadanda, called on those at an anti-Mugabe rally to march on Mugabe’s residence, and live television footage showed hundreds of protesters marching in that direction.

“Let us now go and deliver the message that grandfather Mugabe and his typist-cum-wife should go home,” Matemadanda told the crowd in the Harare township of Highfield.

The crowds in Harare have so far given a quasi-democratic veneer to the army’s intervention, backing its claims that it is merely effecting a constitutional transfer of power, which would help it avoid the diplomatic backlash and opprobrium that normally follows coups.

The military had been prompted to act by Mugabe’s decision to sack Mnangagwa, Grace Mugabe’s main rival to succeed her husband. The next presidential election is due next year.

Zimbabweans abroad were also awaiting the end of Mugabe’s rule. Hundreds living in Britain gathered outside the country’s embassy in central London calling on the leader to step aside.

“I am happy today because Bob Mugabe is about to go. He must go. At least if he goes, we’ll have a change of president after so many years of injustice,” said Florence, a 34-year-old who declined to give her last name.

For some Africans, Mugabe remains a nationalist hero, the continent’s last independence leader and a symbol of its struggle to throw off the legacy of decades of colonial subjugation.

But to many more at home and abroad, he was reviled as a dictator happy to resort to violence to retain power and to run a once-promising economy into the ground.

Although Mugabe had been digging in his heels in the face of army pressure to quit, he appeared to have run out of road, devoid of domestic or international support.

Political sources and intelligence documents seen by Reuters said Mugabe’s exit was likely to pave the way for an interim unity government led by Mnangagwa, a life-long Mugabe aide and former security chief known as “The Crocodile”.

Stabilizing the free-falling economy will be the number one priority, the documents said.

The United States, a long-time Mugabe critic, said it was looking forward to a “new era” in Zimbabwe, while President Ian Khama of neighboring Botswana said Mugabe had no diplomatic support in the region and should resign at once.

In a sign of the depth of his demise, Mugabe’s ruling ZANU-PF called on Friday for him to go, according to The Herald, the state newspaper that has served as a loyal mouthpiece for nearly four decades.

ZANU-PF branches in all 10 provinces had also called for the resignation of Mugabe’s wife Grace, the first lady whose ambitions to succeed her husband outraged the military and much of the country.

To many Zimbabweans, Grace is more familiar as “Gucci Grace” on account of her reported dedication to shopping, or – in the wake of the alleged assault in September on a South African model – “Dis-Grace”.

The scenes in Harare reflect the anger and frustration that has built up in nearly two decades of economic mismanagement that started with the seizure of white-owned farms in 2000, the catalyst of a wider collapse.

The central bank tried to print its way out of trouble by unleashing a flood of cash but that only made matters worse, leading to hyperinflation that topped out at 500 billion percent in 2008.

At least 3 million Zimbabweans emigrated in search of a better life, most of them to neighboring South Africa.

After stabilizing briefly when Mugabe was forced to work with the opposition in a 2009-2013 unity government, the economy has collapsed again, this time due to a chronic shortage of dollars in the country of 16 million people.

In October, monthly inflation leapt to more than 50 percent, putting basic goods beyond the means of many in a country with 90 percent unemployment.

Mugabe’s only public appearance since the military took over on Wednesday was at a university graduation ceremony on Friday morning. Decked out in blue and yellow academic gowns, he appeared tired, at one point falling asleep in his chair.

A senior member of the ZANU-PF ruling party said it was only a matter of time before he agreed to his own departure.

“If he becomes stubborn, we will arrange for him to be fired on Sunday,” the source said. “When that is done, it’s impeachment on Tuesday.”