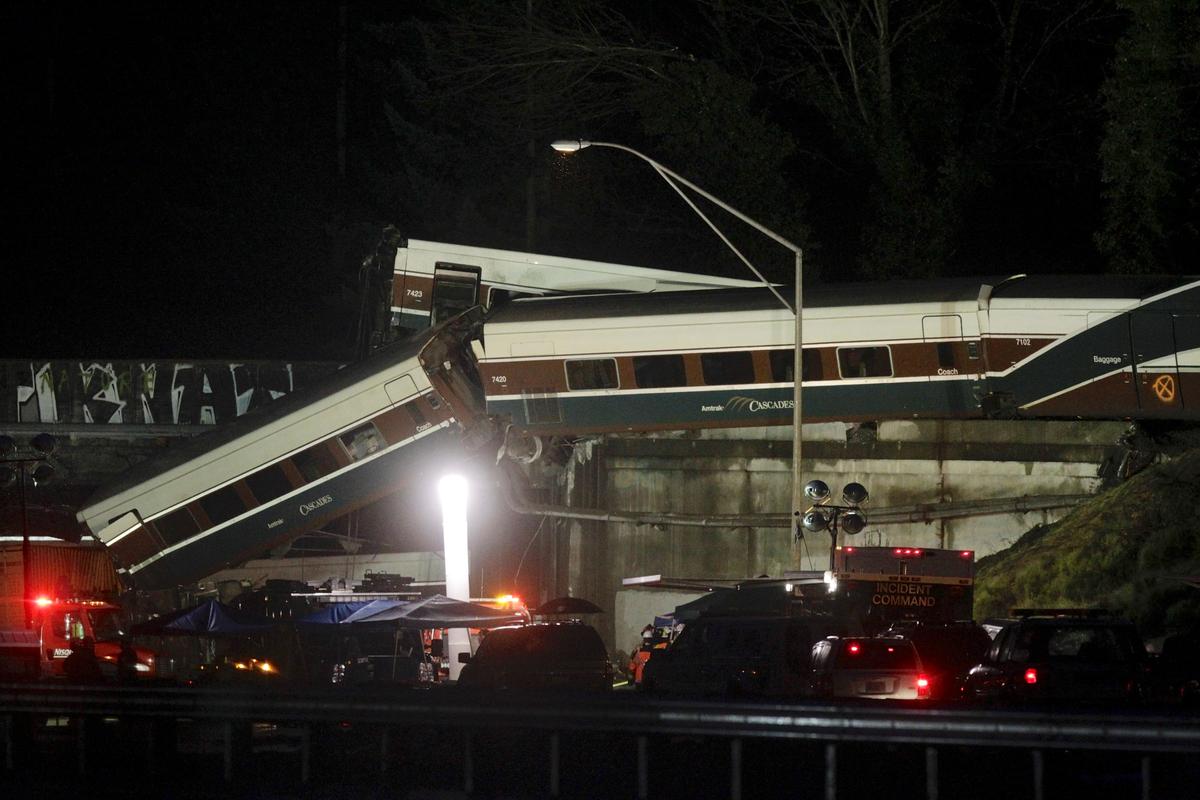 DUPONT, Wash. (Reuters) – An Amtrak train derailed on Monday during its inaugural run on a faster route from Seattle to Portland, Oregon, sending passenger cars tumbling from a bridge onto a major highway, killing at least three people and injuring more than 70.

Thirteen of the train’s 14 cars jumped the tracks near the town of DuPont, Washington State Patrol spokeswoman Brooke Bova said. Amtrak said there were 86 aboard, 80 of them passengers.

Five vehicles and two trucks were involved in the accident, and the highway was littered with fragments of the bridge and tree branches. Some motorists were injured but none died, authorities said.

“We have been told there are three casualties at this time,” Bova told a news conference, adding about 100 people were taken to nearby hospitals. Ten people have serious injuries and dozens have been released, the Washington State Patrol said.

She said all the train cars had been searched. The state patrol has turned over the investigation to the U.S. National Transportation Safety Board (NTSB), whose members were on the scene.

One aspect of the situation likely be in focus is the speed at which the train took a curve leading up to the bridge.

Geoff Patrick, a spokesman for Sound Transit, which owns the track, said it had recently been upgraded to handle passenger trains, from its prior use for slow-moving freight trains. The curving stretch of track where the accident took place had a speed limit of 30 miles per hour (48 kph), Patrick said.

Several hours after the 7:34 a.m. crash, train cars remained dangling from the overpass, with others strewn across Interstate 5, a major West Coast route stretching from the Canadian to Mexican borders.

Cranes have been brought in to remove the carriages.

“It was just a scene of chaos and piles of twisted metal,” said Ted Danek, administrator for the city of Dupont who visited the site.

Some of those on board escaped by kicking out windows, passenger Chris Karnes told news outlet KIRO 7.

“All of a sudden, we felt this rocking and creaking noise, and it felt like we were heading down a hill,” Karnes said. “The next thing we know, we’re being slammed into the front of our seats, windows are breaking, we stop, and there’s water gushing out of the train. People were screaming.”

Rescue personnel and equipment are seen working into darkness at the scene where an Amtrak passenger train derailed on a bridge over interstate highway I-5 in DuPont, Washington, U.S. December 18, 2017. REUTERS/Steve Dipaola

The derailment happened on the first day Amtrak trains began using the new inland route between the Washington cities of Tacoma and Olympia, part of a $181-million project to cut travel time, according to an October news release from the state’s transport department and Amtrak.

The rerouting takes trains along I-5, enabling them to reach speeds of 79 miles per hour (127 km per hour).

It was not immediately clear whether the derailment was connected to the new route. An NTSB member told reporters it was too early to say what may have caused the crash.

The state transportation department said the track had undergone “weeks of inspection and testing” before Monday.

A train crew member told an emergency dispatcher the train came around a corner before the bridge and then “We went on the ground,” according to an audio recording posted by Broadcastify.com.

Asked whether everyone was OK, the crew member replied, “I am still figuring that out. We got cars everywhere and down onto the highway.”

Amtrak’s co-chief executive, Richard Anderson, declined to speculate on the cause. He confirmed that positive train control (PTC), a system that automatically slows trains if they are going too fast, was not installed on the tracks.

By law, PTC must be installed on all passenger rail systems by 2018, a deadline that has repeatedly been delayed after rail agencies said implementation was more complicated than anticipated. Sound Transit commuter line, which owns the track, reported in September that it did not yet have PTC in operation.

The derailment was Amtrak’s second in Washington state this year. On July 2, a southbound train with more than 250 people aboard derailed in the town of Steilacoom, just a few miles north of Monday’s derailment. No serious injuries were reported.

In May 2015, an Amtrak train derailed in Philadelphia, killing eight people and injuring more than 200. The NTSB concluded the driver became distracted by radio transmissions and lost track of where he was.

That crash prompted criticism from the NTSB about Amtrak’s safety record. Amtrak said last month it had made numerous reforms.