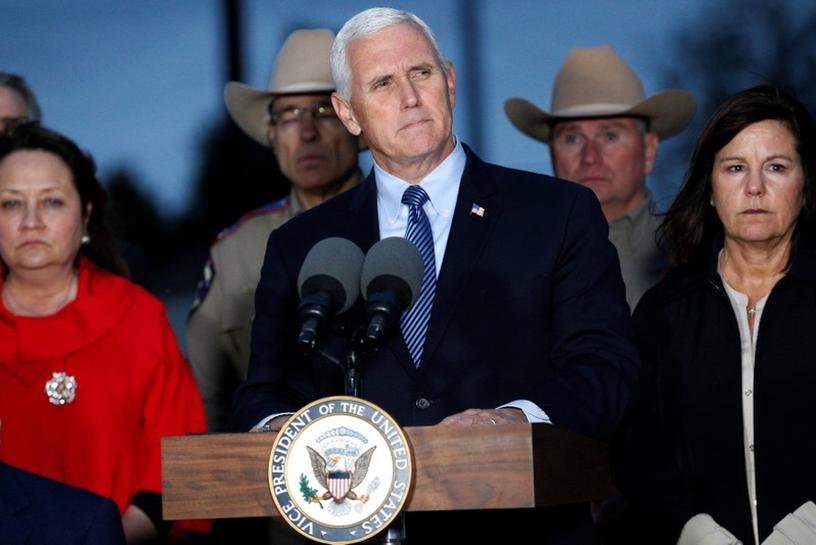 FLORESVILLE, Texas (Reuters) – U.S. Vice President Mike Pence traveled on Wednesday to rural southeastern Texas, where he paid tribute to the victims and heroes from a church massacre that stands as the deadliest gun violence ever committed in a U.S. place of worship.

Pence and his wife, Karen, were welcomed with cheers and applause from as many as 2,000 people who filled half of a high school football stadium in Floresville, Texas, for the prayer vigil, about 13 miles from the scene of Sunday’s carnage in the town of Sutherland Springs.

“We gather tonight to offer our deepest condolences, and I offer the condolences of the American people to all those affected by the horrific attack that took place just three days ago,” Pence told the crowd.

Pence was called upon to fill the role of America’s “consoler-in-chief” in the absence of President Donald Trump, who has been out of the country on a state visit to Asia since before the shooting rampage.

“President Trump wanted to come to Texas tonight to tell all of you, ‘We are with you, the American people are with you,’ and as the president said Sunday from halfway around the world, ‘we will never leave your side,’” Pence said to rousing applause.

Earlier, he met with wounded survivors and family members of the victims. Authorities have put the death toll at 26, including the unborn child of a pregnant woman who was among those killed. The number of children slain at the First Baptist Church in Sutherland Springs otherwise stood at eight.

“Whatever animated the evil that descended on that church last Sunday, if the attacker’s desire was to silence their testimony of faith, he failed,” Pence said to cheers.

The killer, Devin Kelley, 26, dressed in black and wearing a human-skull mask, stormed into the church sanctuary and opened fire on worshipers with a semi-automatic assault rifle.

Kelley himself was shot twice by another man, Stephen Willeford, who lived nearby and confronted the assailant with his own rifle when the gunman emerged from the church.

Kelley managed to flee the scene in a getaway vehicle but shot himself to death and crashed in a ditch as Willeford and a passing motorist who was flagged down outside the church, Johnnie Langendorff, gave chase in Langendorff’s pickup truck.

Preceding Pence to the microphone, Governor Abbott also praised Willeford, drawing a standing ovation when he declared, “Thank God there was a neighbor who helped save lives on that day.”

The comments from both politicians were enthusiastically received by the crowd.

“It was beyond good. People were hungry for what they were saying,” Beverly Perez, a retiree from nearby Adkins, Texas. “The community is rallying around those who are hurting. We hurt with them.”

No mention by name was made of Kelley, a former Air Force Airman who was convicted by court-martial and served a year in military detention for assaulting his first wife and infant step-son in 2012. Police records show he also escaped briefly from a mental hospital in New Mexico while facing those charges.

Authorities have said Kelley was more recently embroiled in a domestic dispute involving the parents of his second wife and threatening messages he had sent to his mother-in-law.

One of the women killed at the church, Lula Woicinski White, 71, was reported to be the gunman’s grandmother-in-law.

Reflecting lingering tensions in the aftermath of Sunday’s rampage, police were called to a park in Floresville about 2 1/2 hours before the prayer vigil by an unconfirmed report of a man with a gun. But a search of the park and adjacent cemetery by about 15 officers turned found no sign of an actual threat.