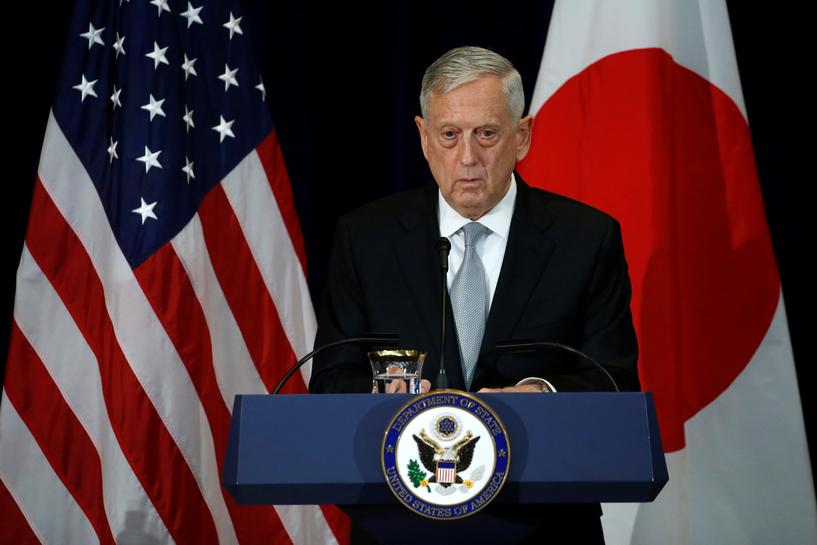 WASHINGTON (Reuters) – Defense Secretary Jim Mattis travels to the Middle East and eastern Europe next week to play the increasingly familiar role of reassuring allies that the United States is committed to them despite mixed messages from President Donald Trump.

Mattis will visit Jordan, Turkey, and Ukraine to address concerns about the fight against Islamic State and give a message that Washington will not tolerate Russia’s annexation of eastern Ukraine.

The informal portfolio of soothing traditional U.S. friends upset by Trump’s often sharp comments and tweets on foreign policy is one that the retired Marine general is becoming used to.

“There is no-one in the administration, maybe with the exception of Vice President Mike Pence, that has to shoulder the responsibility of Trump’s rhetoric more than Mattis,” said Joshua Walker, a former U.S. diplomat and current fellow at the German Marshall Fund of the United States, a think tank.

Earlier this month, Trump said that a U.S. military option was being considered for Venezuela as the country is torn by political and economic upheaval. Within a few hours, the Pentagon publicly announced that it had not received any orders on Venezuela, lowering the temperature slightly.

Mattis, along with Secretary of State Rex Tillerson, sent a conciliatory message to North Korea last weekend in an op-ed piece in the Wall Street Journal after Trump had threatened “fire and fury” if Pyongyang tried to attack the United States.

The two officials wrote that the United States “has no interest in regime change or accelerated reunification of Korea,” addressing some of North Korea’s fears that Washington ultimately intends to replace its leadership.

“It is certainly true that to some extent if you look at both Mattis and Tillerson, who travel a lot, they are both explainers and people who both manage to moderate and reassure,” said Anthony Cordesman at the Center for Strategic and International Studies think tank.

Mattis served as the head of U.S. military’s Central Command from 2010 to 2013, and foreign leaders, especially in the Middle East, trust him, said Cordesman.

On a trip to Iraq earlier this year, Mattis grabbed headlines when he said the U.S. military was not there to “seize anybody’s oil.”

That was an attempt to calm Iraqi worries after Trump had told CIA staff in January, when referring to the U.S. invasion of Iraq in 2003: “We should have kept the oil. But okay. Maybe you’ll have another chance.”

Trump has also upset NATO allies by demanding they increase their defense spending and by seeking better relations with Russia.

“I do think that Secretary Mattis finds himself spending time, putting President Trump’s statements into a broader context… in some cases that does mean defining them more narrowly, or more precisely as to what they mean,” Christine Wormuth, a former number three at the Pentagon, said.

A TRIP TO REASSURE

On the trip that starts this weekend, Mattis will make the first visit to Ukraine by a U.S. secretary of defense since 2007. He will try to reassure Kiev that the United States remains committed to restoring Ukraine’s sovereignty after Russia annexed Crimea in 2014.

Questions were raised when Tillerson said in June that the Trump administration did not wish to be “handcuffed” by the 2015 Minsk accord to end fighting in Ukraine.

That agreement, signed by Russia and Ukraine, calls for a ceasefire, the withdrawal of heavy weapons from the front line and constitutional reform to give eastern Ukraine more autonomy.

While it is not a close U.S. ally, Ukraine has counted on American support against Russia since a pro-Western government took power following street protests in 2014 that ousted a Kremlin-backed president.

Trump’s comments during the election campaign last year, from praise of Russian President Vladimir Putin to appearing to recognize Crimea as part of Russia and contemplating an end to U.S. sanctions on Moscow, stoked fears in Kiev that Trump would mend ties with Russia at Ukraine’s expense.

The Pentagon is awaiting White House approval for a proposal to send “defensive” weapons to Ukraine, including anti-tank missiles, a U.S. official said.

Michael Carpenter, a former deputy assistant secretary of defense for the region, said the trip would be important because it would send a signal to Kiev that the United States remained committed and the approval of the lethal weapons would be a tangible sign of that.

“Mattis believes that this is a security issue that goes beyond Europe, that this is about international norms, sovereignty and territorial integrity,” Carpenter said.

The Pentagon says Mattis will also emphasize the commitment of the United States to Turkey and help Ankara “address its legitimate security concerns- including the fight against the (Kurdistan Workers Party).”

However, Mattis will have to address a number of differences, including the Pentagon’s decision to arm Kurdish YPG fighters to support an operation to retake the Syrian city of Raqqa from Islamic State.

Ankara views the YPG, fighting within a larger U.S.-backed coalition, as the Syrian extension of the Kurdish PKK militant group, which it is fighting in southeastern Turkey.