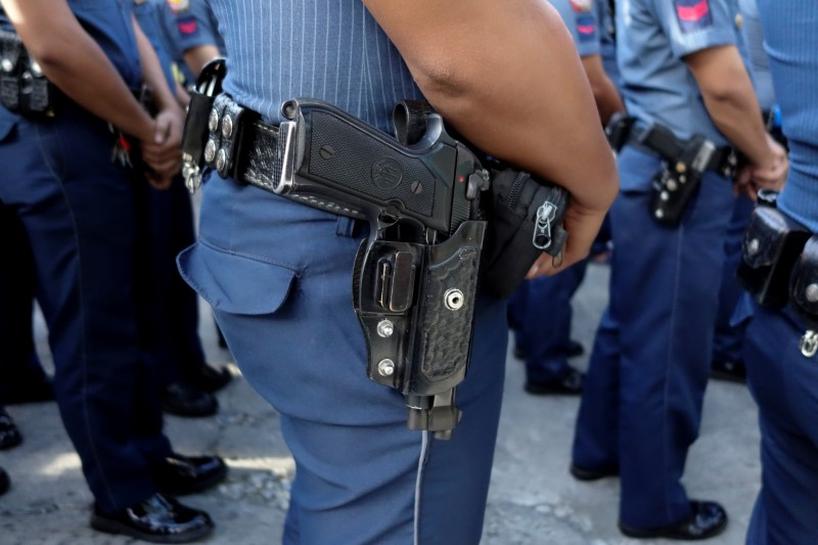 Twenty-seven foreign ministers from the Association of South East Asian Nations (ASEAN) and its dialogue partners like Japan, the United States, India, Canada and Russia, will gather in Manila from Friday until Tuesday.

Metro Manila’s police chief Oscar Albayalde said there was no specific threat so far, but police were monitoring several “Balik-Islam”, or Christians who converted to Islam. They were former hitmen of the communist Alex Boncayao Brigade, or ABB, a group of assassins that was active in the 1980s.

He said the men had joined pro-Islamic State militant groups in the Philippines and could be planning to disrupt the upcoming meetings of foreign ministers.

FILE PHOTO – A police officer is silhouetted against an advertisement for handguns outside a station in Quezon City Police District in Manila, Phillipnes April 3, 2017.Andrew RC Marshall

“We are watching several enclaves where there are large numbers of Muslim populations,” he said.

Among those is Quiapo, an old commercial district close to the presidential palace area, where a bomb during an ASEAN leaders’ summit in April wounded 14 people. The authorities said the motive was a personal dispute.

Security forces have been on high alert since an alliance of pro-Islamic State fighters laid siege to the southern Marawi City on May 23, a battle that is still ongoing and has killed more than 650 people, mostly rebel fighters.

Albayalde said that although the ABB was small and has long been dormant, the conversion of some of its members to Islam meant it needed to be watched.

The Philippines is deploying 13,000 police officers to secure and guard more than 1,700 delegates.