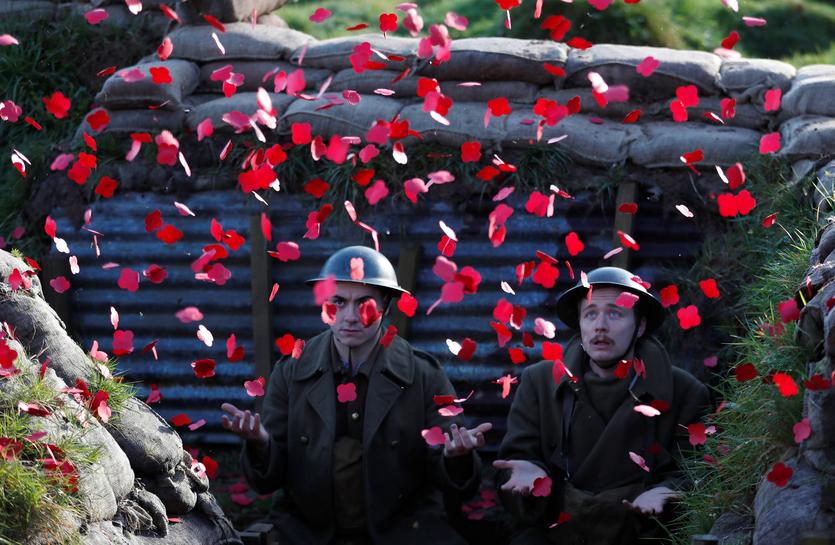 EDINBURGH (Reuters) – An imposing 19th Century building with elegant manicured lawns and sweeping views of the Edinburgh skyline seems an unlikely place to have earned the nickname “Dottyville” from one of Britain’s most revered poets.

Actors Jake Morgan and Sam Ducane extend their hands to catch poppies, as they pose for photographs at the launch of the 1918 Poppy Pledge in a re-creation of a First World War trench at Pollock House in Glasgow, Scotland November 10, 2017. The actors appeared in the The Wipers Times, a play named after a magazine published by British soldiers in the First World War. REUTERS/Russell Cheyne

But Craiglockhart War Hospital, now part of a Heriot Watt University campus on the outskirts of the Scottish capital, was where traumatised souls took refuge from war and where Siegfried Sassoon and Wilfred Owen wrote about their terrifying experiences as part of treatment for shell-shock in 1917.

Their friendship and mutual admiration became the catalyst for some of the most vivid and best-known writing in English about war, playing a big part in changing public perceptions of a patriotic death being a glorious destiny.

This weekend, Britain commemorates its war dead on Remembrance Sunday with the laying of wreaths at official ceremonies up and down the country.

Owen and Sassoon, whose work often features in such ceremonies, were treated for a kind of post-traumatic stress disorder when they were sent to Craiglockhart, a pyschiatric military facility Sassoon affectionately nicknamed Dottyville in a play on the English slang word for “mad”.

The doctor treating Owen recommended a “talking cure,” urging him to write to overcome the terror of being blown into the air by a bomb, Catherine Walker, curator of the War Poets’ Collection housed at Craiglockhart, told Reuters.

His first poems were published anonymously in The Hydra, Craiglockhart’s in-house magazine, which Owen edited.

Most of his poems, however, were published posthumously.

Actors Jake Morgan and Sam Ducane pose for photographs at the launch of the 1918 Poppy Pledge in a re-creation of a First World War trench at Pollock House in Glasgow, Scotland November 10, 2017. The actors appeared in the The Wipers Times, a play named after a magazine published by British soldiers in the First World War. REUTERS/Russell Cheyne

“Dulce et Decorum est”, in which he slates the idea that dying for one’s country is an honour, portrays the terror of a solider dying of gas-poisoning, hearing “the blood/Come gargling from the froth-corrupted lungs,/Obscene as cancer.”

Owen was the younger of the two writers and worshipped published author Sassoon, who was from a wealthy influential family. Sassoon edited and encouraged Owen during a convalescence of several months in Scotland.

“You can certainly see that their poetry tightens up and becomes more powerful while they’re here,” said Walker. “‘Anthem for Doomed Youth’ was orginally ‘Anthem for Dead Youth’ and you can see in the original manuscript that ‘Dead’ is scored out and ‘Doomed’ is substituted, which was Sassoon’s influence on Owen.”

Sassoon had escaped court martial after writing an open letter, read in Britain’s parliament, declaring “wilful defiance of military authority because I believe that the war is being deliberately prolonged by those who have the power to end it”. Instead he was given leave.

Once at Craiglockhart, a former hotel, he described how it was “elaborately cheerful” during the day.

“In the evenings it became, as Sassoon said, ‘a living museum of war neuroses,’” Walker said. “People would hallucinate, have bad dreams, migraines and disturbed sleep and lots of officers stammered and were depressed.”

Their friendship and the cures espoused by their psychiatrists helped both to return to the front, driven by a loyalty to the men they fought with, despite their criticism of the war.

Owen died in battle just before the end of World War One, in 1918, aged 25. Sassoon survived the war and died aged 80.

A permanent exhibition now allows visitors to view the War Poets Collection, offering a glimpse into the minds and experiences of the poets, patients and medical staff at Craiglockhart through documents, photographs and memorabilia.