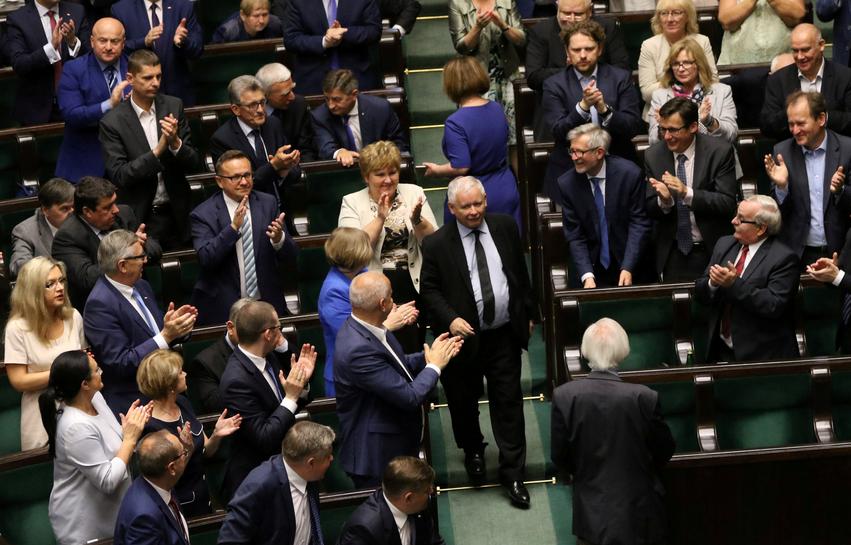 BRUSSELS/WARSAW (Reuters) – Poland could face punishment by the European Union if Warsaw does not halt judicial reforms which the bloc’s executive said on Wednesday would put its courts under government control.

“These laws considerably increase the systemic threats to the rule of law,” the European Commission’s First Vice-President Frans Timmermans told a briefing in Brussels after several thousand people protested against the reforms in Warsaw.

Since winning an election in 2015, the nationalist Law and Justice (PiS) party has sought to increase government influence over courts and prosecutors as well as state media, prompting the EU to review the rule of law in one of its newest members.

Poland’s parliament held a second day of debate on Wednesday on a proposed law giving the government more direct control over the Supreme Court, whose tasks include validating elections in the ex-communist state.

“They would abolish any remaining judicial independence and put the judiciary under full political control of the government,” Timmermans said of the proposed legislation.

The separation of powers between executive and judiciary is a fundamental democratic principle for the EU, but in many member states the effectiveness of separation can be as much a matter of political culture as of formal structures.

Opposition parties say the bill violates the constitutional separation of powers and could give the ruling party influence over election results through the Supreme Court that validates them – charges that PiS rejects.

The Supreme Court bill follows a law passed last week which ends the terms of current members of the National Council of the Judiciary (KRS), one of the main judicial bodies, and gives parliament powers to choose 15 of its 25 members.

Poland’s parliament building had been cordoned off with barriers and guards since Sunday, when thousands protested against the Supreme Court legislation in Warsaw and other cities.

The tensions have echoes of a standoff in December, when opposition leaders blocked the podium of the debating chamber for a month ahead of a budget vote, after objecting to PiS plans to curb media access to parliament.

The party combines a staunchly conservative world view with a left-wing economic agenda and has subdued public media and other courts since coming to power, triggering a series of legal actions by the European Union.

The Chair of the parliamentary Comission on Justice and Human Rights, Stanislaw Piotrowicz speaks as the comission votes on the changes, introduced by the opposition, to the bill that calls for an overhaul of the Supreme Court in Warsaw, Poland, July 19, 2017. Agencja Gazeta/Slawomir Kaminski/via REUTERS

Timmermans said next week Brussels would most likely open a fresh legal case against Poland over the laws, as well as giving Warsaw more recommendations on how to rein in the changes.

He also mentioned what has so far been seen as the “nuclear option” of triggering a punishment procedure that could lead to suspending Poland’s voting rights in the bloc.

“We are coming very close to triggering Article 7,” Timmermans said, although he signaled this was less likely to happen next week.

It would mean that, while the Commission has long said PiS government policies put the rule of law in the country of 38 million people under systemic threat, it would now ask member states to officially confirm this assessment.

A majority of EU states would have to agree and then tell Poland how they think it should act to address the concerns.

Only if and when they decide Warsaw did not heed their calls could they move to imposing sanctions. This would need unanimity of all the other EU states and Warsaw’s eurosceptic, nationalist ally Hungary has made clear it would block such a move.

Legal cases could eventually lead to hefty fines, although they are usually a lengthy and slow-brewing process.

Despite the pressure, PiS has offered no concessions to Brussels, instead presenting the criticism as unacceptable foreign meddling in domestic affairs of the country which joined the EU in 2004.

Asked if Brussels risked pushing Poland down the line Britons chose in voting to leave the EU, Timmermans said: “No.”

“I will do everything I can… to make sure that Poland sticks to a development that fosters the rule of law, democracy, openness, freedom of the media, market economy and opportunity for all.”

“This is the clear choice made by the Polish people when they freed themselves from the communist oppression… This is too much, too important to give up,” he said.