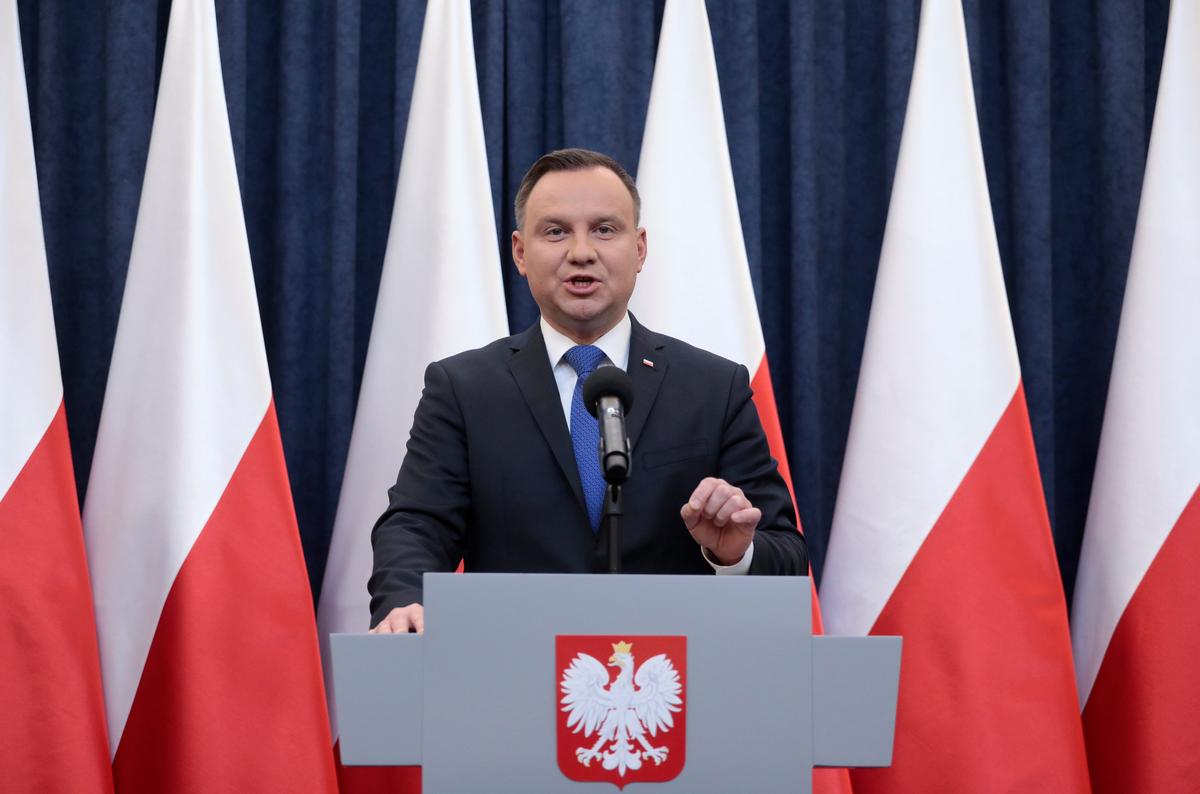 WARSAW (Reuters) – Poland’s president said on Tuesday he would sign into law a bill that imposes jail terms for suggesting the country was complicit in the Holocaust, defying criticism from Israel, the United States and activists.

Andrzej Duda said in a televised address the legislation would safeguard Poland’s international reputation, but Israel called for amendments, saying the two countries had a “joint responsibility” to preserve the memory of the Holocaust.

“(This bill) … protects Polish interests … our dignity, the historical truth… so that we are not slandered as a state and as a nation,” said Duda, an ally of the ruling Law and Justice party (PiS) which introduced the legislation.

But it also “takes into account the sensitivity of those for whom the issue of historical truth, the memory of the Holocaust is incredibly important”, Duda added.

The Polish law would impose prison sentences of up to three years for using the phrase “Polish death camps” and for suggesting “publicly and against the facts” that the Polish nation or state was complicit in Nazi Germany’s crimes.

PiS, a socially conservative, nationalist party that has clashed with the European Union and human rights groups on a range of issues since taking power in late 2015, says the new law is needed to ensure that Poles are recognized as victims, not perpetrators, of Nazi aggression in World War Two.

Israel says the law will curb free speech, criminalize basic historical facts and stop any discussion of the role some Poles played in Nazi crimes. Activists say the passage of the bill has encouraged a rise in anti-Semitism.

More than three million of the 3.2 million Jews who lived in pre-war Poland were murdered by the Nazis, accounting for about half of all Jews killed in the Holocaust.

Jews from across the continent were sent to be killed at death camps built and operated by Germans in occupied Poland – home to Europe’s biggest Jewish community at the time – including Auschwitz, Treblinka, Belzec and Sobibor.

Poland’s President Andrzej Duda speaks during his media announcement about his decision on the Holocaust bill at Presidential Palace in Warsaw, Poland, February 6, 2018. Agencja Gazeta/Dawid Zuchowicz via REUTERS

Duda said he would also ask the Constitutional Tribunal for a number of clarifications about the bill. The legislation provides exemptions for academic research and art.

“We hope that within the allotted time, until the court’s deliberations are concluded, we will manage to agree on changes and corrections. Israel and Poland hold a joint responsibility to research and preserve the history of the Holocaust,” the Israeli government said in a statement on Twitter.

Israel’s education minister said on Monday he was “honored” Poland had canceled his visit to Warsaw this week because he refused to retract his condemnation of the bill.

“The blood of Polish Jews cries from the ground, and no law will silence it,” Bennett later said in a statement.

According to figures from the U.S. Holocaust Memorial Museum, the Nazis, who invaded Poland in 1939, also killed at least 1.9 million non-Jewish Polish civilians.

The legislation, which comes at a time of electoral gains for anti-immigrant parties like PiS across Europe, has reopened a painful debate in Poland over the Holocaust.S

Thousands of Poles risked their lives to protect Jewish neighbors during the war. But research published since the fall of communism in 1989 showed that thousands also killed Jews or denounced those who hid them to the Nazi occupiers, challenging the national narrative that Poland was solely a victim.

The bill will also make it illegal to deny the murder of about 100,000 Poles by units of the Ukrainian Insurgent Army (UPA) during World War Two, a move likely to increase tensions with neighboring Ukraine.

Making shipping cleaner – is LNG the answer?
Uptick in complaints about renovation noise as more people work from home
Singapore needs to manage risks, not eliminate them, in reopening for travel: Chan Chun Sing
Commentary: Thanks to China’s move on Ant, FinTech firms may look like banks soon
Businesses and residents near Top Glove dormitories on edge, as COVID-19 cases spike among workers