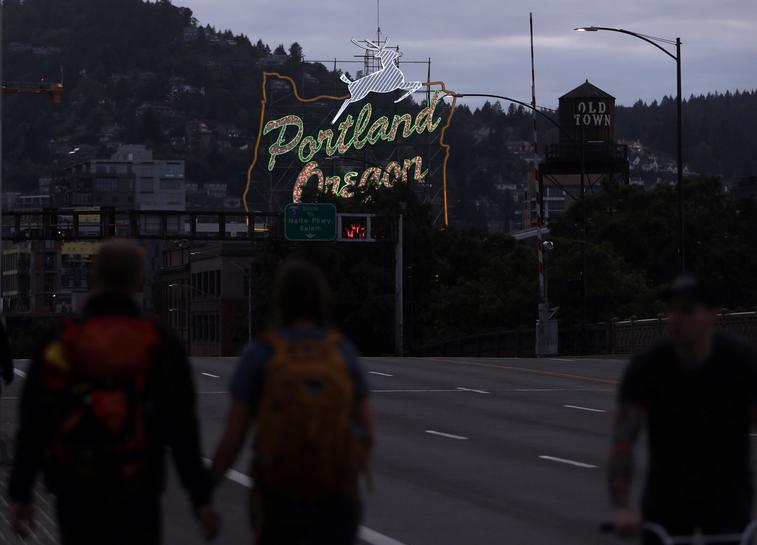 The Trump Free Speech Rally and counter-protests were set to unfold a week after a man shouting religious and racial slurs at two teenage girls on a Portland commuter train stabbed three passengers who intervened, killing two of them.

One of the girls accosted in the incident, which the FBI is investigating as a suspected hate crime, was black, the other was wearing a Muslim head scarf.

Jeremy Christian, a 35-year-old with a prior felony record, was arrested and charged with murder in the May 26 attack, which Trump has condemned as “unacceptable” while saluting the three stabbing victims for “standing up to hate and intolerance.” [nL1N1IW15B]

Portland Mayor Ted Wheeler last week urged federal authorities to rescind a permit for the June 4 pro-Trump rally, saying he worried the protest could inflame tensions in the wake of the stabbings.

The Portland Police Bureau vowed a show of force on Sunday with help from state troopers, county sheriff’s deputies, the FBI and Federal Protective Service, warning that protesters with weapons would face arrest.

Joey Gibson, an activist with the pro-Trump group Patriot Prayer, told local media he had arranged for private security to accompany his supporters.

Gibson said some of those security personnel would have permits to carry concealed handguns and some were affiliated with militia groups, Portland’s Oregonian newspaper reported.

Anti-Trump activists staged a separate demonstration in Portland on Saturday, as part of nationwide “March for Truth” rallies in support of investigations into Russian meddling in the 2016 presidential election and possible collusion by Trump’s campaign.

That event, which drew a crowd of some 600 people, remained peaceful, with no arrests reported.

(Reporting in Portland by Terray Sylvester; Additional reporting and writing by Steve Gorman in Los Angeles; Editing by Dan Whitcomb and Mary Milliken)