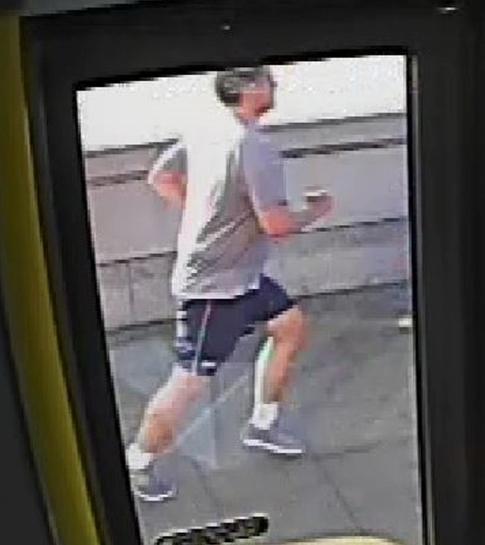 LONDON (Reuters) – British police appealed on Tuesday for help in tracing a jogger who appeared to push a woman into the path of an oncoming bus on a busy west London street.

Closed circuit TV footage showed the male runner jog past one man on Putney Bridge on May 5 before knocking into the 33-year-old victim. As she tumbled to the ground, her head and upper body fell into the path of an oncoming bus which managed to swerve out of her way.

The jogger ran on but returned heading in the other direction about 15 minutes later, the Metropolitan Police said. The man but did not acknowledge the victim when she tried to speak to him and instead kept on running.

“The victim was put in extreme danger when she was knocked into the road. It was only due to the superb quick reactions of the bus driver that she was not hit by the vehicle,” said Sgt. Mat Knowles, the investigating officer.

After the woman fell into the road, the bus stopped and passengers went to help the victim who had sustained minor injuries.

Police said that the footage had been released as the investigation into identity of the runner, described as a white man in his 30s, had so far been unsuccessful.

Analysts expect private home prices to rise further on tight supply and strong demand
25 new COVID-19 cases in Singapore, all imported
I. A. Rehman: A titan of human rights.
Pakistan PM says insulting Mohammed should be same as denying Holocaust
Biden to withdraw all US troops from Afghanistan by Sep 11