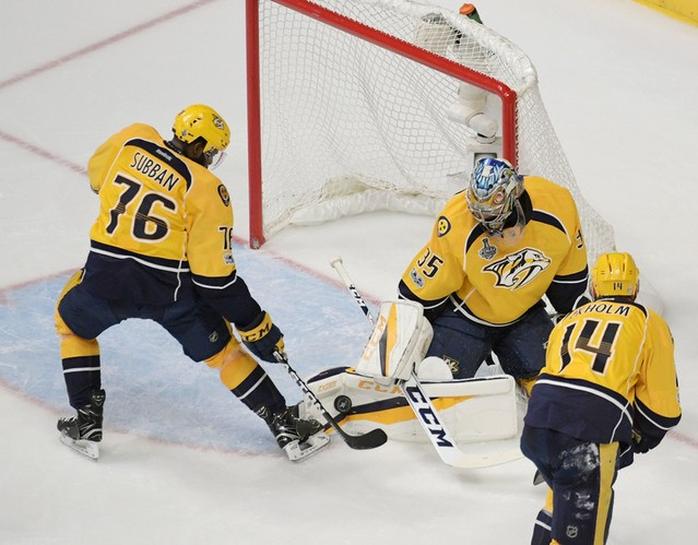 Nashville defenseman P.K. Subban had guaranteed a win in Game Three of the Stanley Cup Final series and the Predators responded with a 5-1 rout of the Pittsburgh Penguins on Saturday.

Pittsburgh lead the best-of-seven 2-1 but missed a chance to take a stranglehold on the series at Bridgestone Arena in Nashville.

After leading almost every statistical category except ‘goals scored’ in the opening two games in Pittsburgh, Subban had predicted the Predators would take the third game when the series moved to Nashville.

The defending Stanley Cup champion Penguins went 1-0 up early in the first period when Jake Guentzel pounced on a rebound from an Ian Cole shot and squeezed the puck past Nashville goaltender Pekka Rinne from close range, silencing the raucous crowd.

But that was the only time the Penguins found a way past Rinne, who stopped 27 of 28 shots and stepped up his play after sub-par performances in the first two games of the series.

The Predators hit back with five unanswered goals, including two within a minute in the second period through Roman Josi, on a power play, and then center Frederick Gaudreau to take the lead.

“We knew what it was going to be like coming back home and we wanted to take advantage of it and we did,” Subban said.

“The first two games we played good hockey but that’s a championship team. You can’t afford to make the mistakes we made.

“A bad bounce early and we went down one-nothing but like our team has done the whole playoffs, we showed really good composure today and we’re going to take that into the next game.”

The game remained in the balance until the dying moments of the second period, when James Neal scored from close range with 22 seconds left to give Nashville a two-goal cushion.

Craig Smith scored on a breakaway early in the third period, before a power play goal by Mattias Ekholm made it 5-1.

“The first part of the game we did everything we wanted to do,” Pittsburgh coach Mike Sullivan told reporters.

“Their first two goals in the second there, I thought our push-back was really good. We had seven or eight minutes of really good hockey.”

Game Four is in Nashville on Monday.

(Reporting by Andrew Both in Cary, North Carolina; Editing by Peter Rutherford)