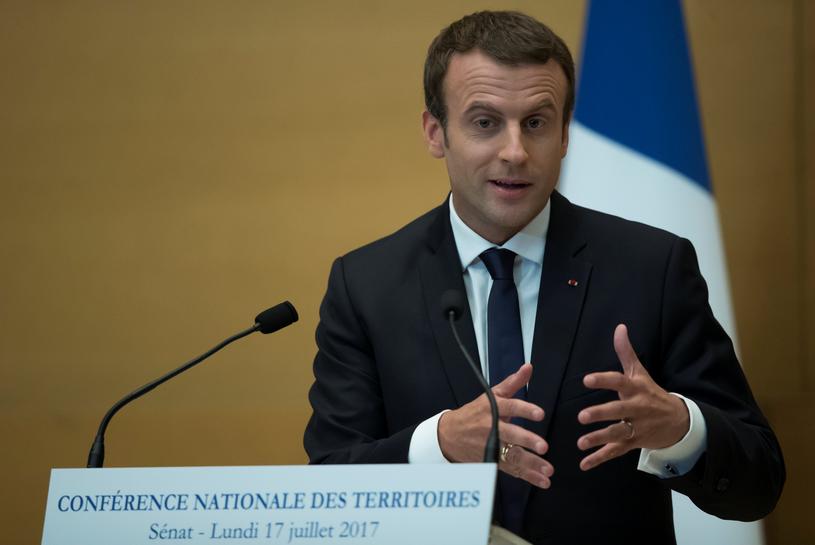 PARIS (Reuters) – French President Emmanuel Macron said on Monday the complex administrative structure of the Paris megalopolis must be “drastically simplified” to enable it to compete with other world cities.

Macron said his government would propose this autumn a reorganization of the greater Paris area, a tricky reform his two predecessors kicked off but largely failed to complete after running into resistance among local politicians.

“The greater Paris idea deserves better than what we collectively did of it,” Macron said in a speech on France’s territorial organization at the senate.

“If we want the greater Paris area to compete successfully on the international stage, if we want to produce wealth, to then spread it harmoniously across the country, we need to drastically simplify its structures,” he added.

French President Emmanuel Macron smiles as he prepares to deliver a speech during the local government conference dubbed ‘National Conference of Territories’ held at the Senate in Paris, France, July 17, 2017.Ian Langsdon/Pool

The administrative borders of the City of Paris have remained broadly unchanged since Napoleon III’s prefect Baron Haussmann carved up the grand boulevards that criss-cross the French capital in the 19th century.

Some 2 million people now live within the limits of the city proper, which sits in the middle of a much more populous conurbation of around 10 million people governed by a patchwork of independent authorities.

That has hindered efforts to bridge the gap between a mostly wealthy central Paris, rich and leafy suburbs in the west and deprived neighborhoods in the north and east of the capital, where riots occasionally erupt.

In recent years, former conservative president Nicolas Sarkozy and his Socialist successor Francois Hollande have sought to simplify France’s system of local government – which is so complex it is often compared to a “mille-feuille” or multi-layered puff pastry – to stop a spiraling increase in public-sector jobs and spending.

But the creation in 2016 of a Greater Paris authority – or Metropole du Grand Paris – modeled on the Greater London Authority, was not followed by the abolition of the redundant sub-authorities beneath it due to resistance from local mayors, effectively adding yet another layer of bureaucracy.