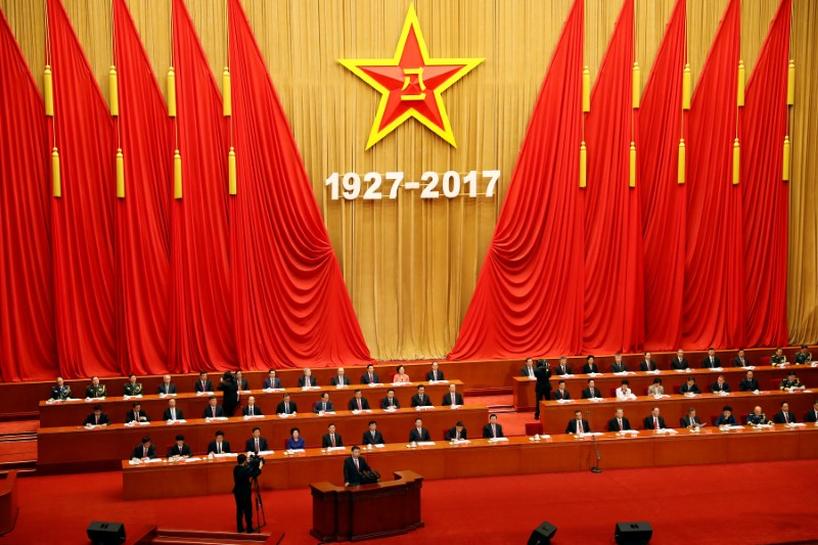 BEIJING (Reuters) – China loves peace but will never compromise on defending its sovereignty, President Xi Jinping said on Tuesday while marking 90 years since the founding of the People’s Liberation Army.

China has rattled nerves around Asia and globally with its increasingly assertive stance in territorial disputes in the East and South China Seas and an ambitious military modernization plan.

Relations with self-ruled Taiwan have also worsened since Tsai Ing-wen from the pro-independence Democratic Progressive Party won presidential elections there last year. China considers Taiwan a wayward province, to be brought under Beijing’s control by force if necessary.

Xi, speaking at the Great Hall of the People, made no direct reference to any particular territorial dispute, as he sought to assure that China’s intentions were peaceful, but also show that China would not be bullied.

“The Chinese people love peace. We will never seek aggression or expansion, but we have the confidence to defeat all invasions,” Xi said in comments carried live on state television.

“We will never allow any people, organization or political party to split any part of Chinese territory out of the country at any time, in any form,” he said. “No one should expect us to swallow the bitter fruit that is harmful to our sovereignty, security or development interests.”

The army has been a central target of Xi’s wide-ranging anti-corruption campaign, with several senior military officers, including Xu Caihou, Guo Boxiong and Gu Junshan, being felled for graft since Xi came to power.

Xi said that, after five years’ hard work, the PLA had successfully “remodelled” its organizational and power structure, as well as its public image.

Paramilitary policemen march outside the Great Hall of the People after the ceremony marking the 90th anniversary of the founding of the China’s People’s Liberation Army in Beijing, China August 1, 2017.Damir Sagolj

A reshuffle of the military’s senior ranks at a key five-yearly Communist Party congress in the autumn is expected to further strengthen his grip, and Xi repeatedly reaffirmed the Party’s “absolute leadership” over the army.

“To build a strong military, [we] must unswervingly adhere to the Party’s absolute leadership over the armed forces, and make sure that the people’s army always follow the Party,” Xi said.

Quoting Chairman Mao Zedong, the founder of modern China, Xi said: “Our principle is that the party commands the guns, and the guns must never be allowed to command the party.”

China has not fought a war in decades and the government insists it has no hostile intent, but simply needs the ability to properly defend the world’s second-largest economy.

China’s armed forces, the world’s largest, are in the midst of an ambitious modernization program, which includes investment in technology and new equipment, such as stealth fighters and aircraft carriers, as well as cuts to troop numbers.

“The People’s Army must be brave enough to change and innovate, not at any time must it become rigid or stagnate,” Xi said.

Some of the military reforms have been controversial at home. Sources with ties to the military say Xi’s announcement at the 2015 parade to cut 300,000 troops has caused unease within the ranks.

On Sunday, Xi presided over a large military parade at the remote Zhurihe training base in China’s northern Inner Mongolia region, where he inspected troops from the back of a jeep.

PCB confirms 187 players accepted 2020-21 domestic contracts
COVID-19: No need to declare state of emergency at this time, says Malaysian king
Commentary: No worker is untrainable. Employers have to step up to help
Bucking the trend, some F&B businesses open new outlets despite COVID-19 downturn
COVID-19 downturn to be more prolonged than past recessions, slow recovery for jobs market: MAS