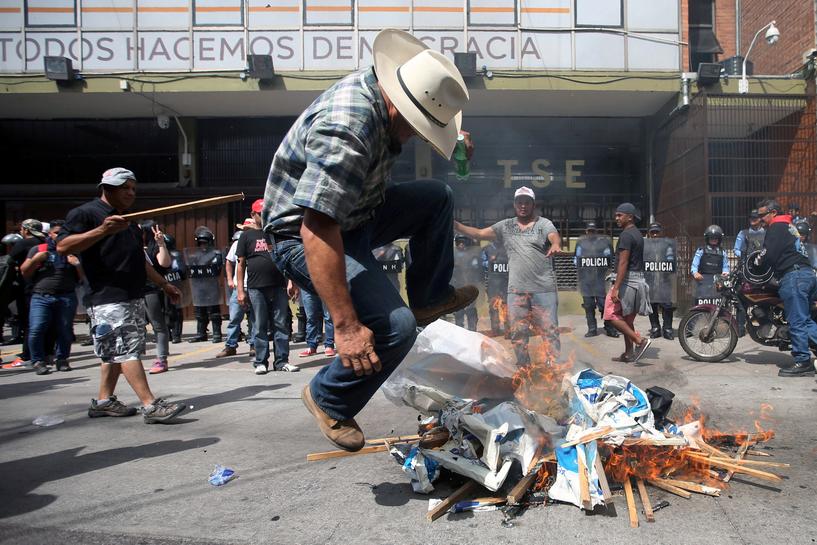 TEGUCIGALPA (Reuters) – A TV host who seemed poised to win Sunday’s Honduran presidential election brought thousands of protesters onto the streets on Wednesday, as his early lead evaporated to under 25,000 votes after delays in the widely criticized vote count.

Sportscaster and entertainer Salvador Nasralla, 64, heads a coalition made up of leftist and centrist parties. He did unexpectedly well in a partial count of votes released on Monday, taking a strong five-point lead against U.S.-friendly center-right President Juan Orlando Hernandez.

However, after not releasing results for about 36 hours, on Tuesday afternoon the election tribunal began issuing a vote count that showed Nasralla’s lead dwindling to less than 1 percentage point, with nearly a quarter of ballots still to be counted.

With Nasralla and Hernandez both claiming victory, international observers said the delays were damaging the credibility of authorities.

Pre-election opinion polls indicated that Hernandez had been favorite to win the vote in the poor Central American nation, which struggles with violence, drug gangs and corruption and has one of the world’s highest murder rates.

Nasralla’s supporters accused the electoral tribunal of only releasing results from regions that support Hernandez, who has won U.S. praise for helping tackle a flow of migrants to the north and extraditing drug cartel leaders to the United States.

In a television interview on Tuesday evening, an angry Nasralla said the election was being stolen from him and asked his supporters to flock to capital Tegucigalpa to protest.

“We’ve already won the election,” he said. “I‘m not going to tolerate this, and there are no reliable institutions in Honduras to defend us.”

About 8,000 people gathered in Tegucigalpa for Nasralla’s march on Wednesday, with more slowly arriving.

“I‘m here so that justice and the will of the people is carried out, because we elected Salvador Nasralla, and Juan Orlando Hernandez wants to steal his victory,” said 22-year-old David Ramirez, a red political flag draped over his shoulder.

The Organization of American States’ election observers on Tuesday urged people to remain calm and wait for official results, which they said should be delivered as quickly and transparently as possible.

Supporters of Salvador Nasralla, presidential candidate for the Opposition Alliance Against the Dictatorship, wave flags during a protest in Tegucigalpa, Honduras November 29, 2017. REUTERS/Jorge Cabrera

“The credibility of the electoral authorities and the legitimacy of the future president depend on this,” the OAS said.

Behind closed doors, the parties of Hernandez and Nasralla were discussing immunity from prosecution for current officials and carving up positions in government, two diplomats told Reuters on Tuesday.

By 11.00 a.m. local time (1700 GMT) on Wednesday, Nasralla’s lead had thinned to less than one percentage point, with about 77 percent of ballots in the nation of 9 million people counted, according to the election tribunal.

With a booming voice and finely coiffed hair, Nasralla is one of the country’s best known faces, the host of game shows that feature scantily clad women.

He is backed by leftist former President Manuel Zelaya, who was ousted in a coup in 2009 after he proposed a referendum on his re-election. The possible return of Zelaya risks fueling concern in Washington.

The United States has longstanding military ties to Honduras but few ideological allies among the current crop of Central American presidents.

Hernandez was credited with lowering the murder rate and boosting the economy, but he was also hurt by accusations of ties to illicit, drug-related financing that he denies.

A foreign diplomat in Tegucigalpa, who asked not to be named, said the U.S. would be concerned by a victory for the coalition led by “maverick” Nasralla.

But the diplomat added that a slim victory for Hernandez might be “the worst case scenario”, as it would likely trigger protests and demands for a full vote count.