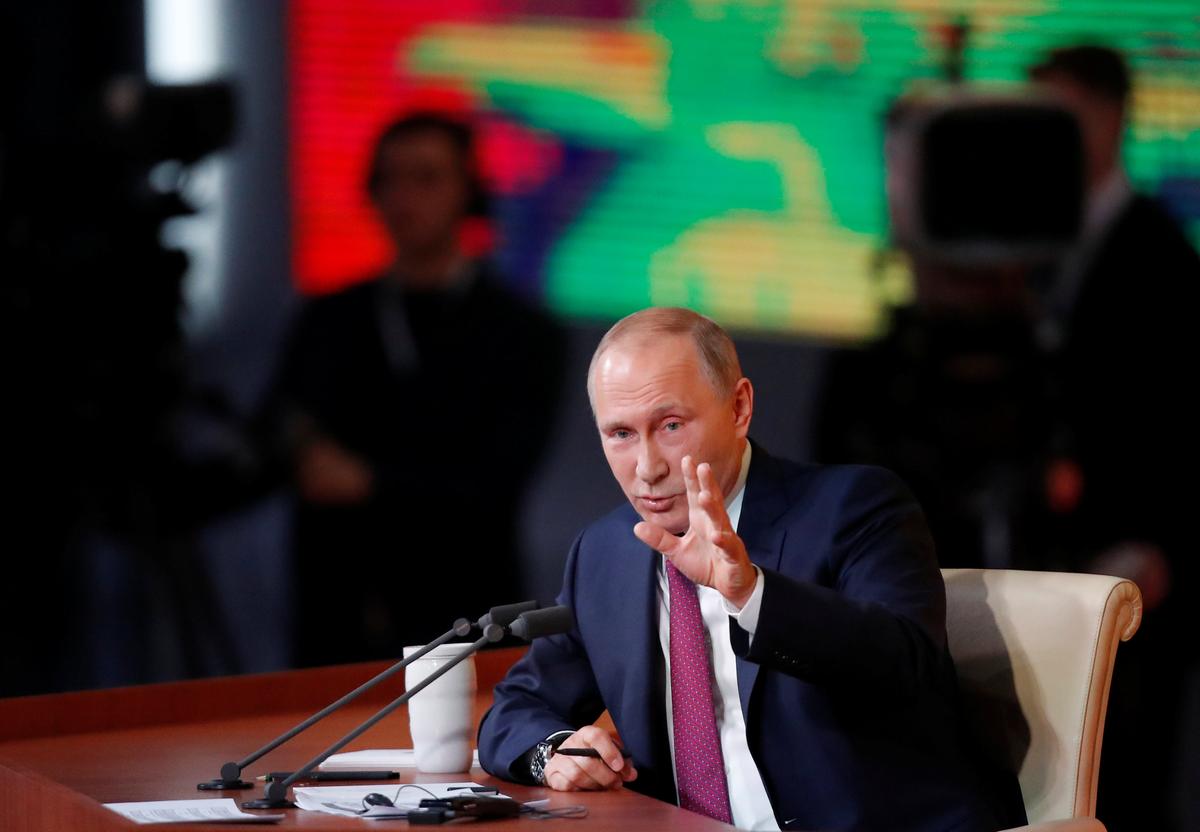 MOSCOW (Reuters) – Russian President Vladimir Putin said on Thursday the United States was in the grip of a fabricated spymania whipped up by President Donald Trump’s opponents but he thought battered U.S.-Russia relations would recover one day.

Putin, who said he was on first name terms with Trump, also praised the U.S. president for what he said were his achievements.

“I‘m not the one to evaluate the president’s work. That needs to be done by the voters, the American people,” Putin told his annual news conference in Moscow, in answer to a question.

“(But) we are objectively seeing that there have been some major accomplishments, even in the short time he has been working. Look at how the markets have grown. This speaks to investors’ trust in the American economy.”

Trump took office in January, saying he was keen to mend ties which had fallen to a post-Cold War low. But since then, ties have soured further after U.S. intelligence officials said Russia meddled in the presidential election, something Moscow denies.

Congress is also investigating alleged contacts between the Trump election campaign and Russian officials amid allegations that Moscow may have tried to exercise improper influence.

Putin dismissed those allegations and the idea of a Russia connection as “fabricated.” He shrugged off accusations that Russia’s ambassador to the United States had done something wrong by having contacts with Trump campaign figures saying it was “international practice” for diplomats to try to have contacts with all candidates in an election.

“What did someone see that was egregious about this? Why does it all have to take on some tint of spymania?,” said Putin.

“This is all invented by people who oppose Trump to give his work an illegitimate character. The people who do this are dealing a blow to the state of (U.S.) domestic politics,” he added, saying the accusations were disrespectful to U.S. voters.

Moscow understood that Trump’s scope for improving ties with Russia was limited by the scandal, said Putin, but remained keen to try to improve relations.

Washington and Moscow had many common interests, he said, citing the Middle East, North Korea, international terrorism, environmental problems and the proliferation of weapons of mass destruction.

“We will normalize our relations and will develop (them) and overcome common threats.”

However, Putin lashed out at U.S. policy on North Korea, warning a U.S. strike there would have catastrophic consequences.

In one of the most dramatic moments of the news conference, Ksenia Sobchak, a TV personality who has said she plans to run against Putin in a presidential election in March, asked him about what she said was the lack of political competition.

Putin, 65, has been in power, either as president or prime minister, since the end of 1999.

In particular, Sobchak asked about the case of opposition leader Alexei Navalny who looks unlikely to be allowed to run in the election due to what Navalny says is a trumped up criminal case.

Putin, who polls suggest will be comfortably re-elected, warned that candidates like Navalny would destabilize Russia and usher in chaos if elected.

“Do you want attempted coups d‘etat? We’ve lived through all that. Do you really want to go back to all that? I am sure that the overwhelming majority of Russian citizens do not want this.”

Putin said the authorities were not afraid of genuine political competition and promised it would exist.

Navalny, commenting on social media, said Putin’s response showed that barring him from taking part in next year’s presidential election was “a political decision.”

“It’s like he’s saying we’re in power and we’ve decided that it (Navalny running) is a bad idea,” Navalny said.

Putin disclosed he planned to run as an independent candidate and garner support from more than one party, in a sign the former KGB officer may be keen to strengthen his image as a “father of the nation” rather than as a party political figure.

He coughed his way through the first part of the news conference at times, and misread a placard held up by a journalist which he incorrectly thought said “Bye Bye Putin,” an error he quipped was due to age affecting his eyesight.