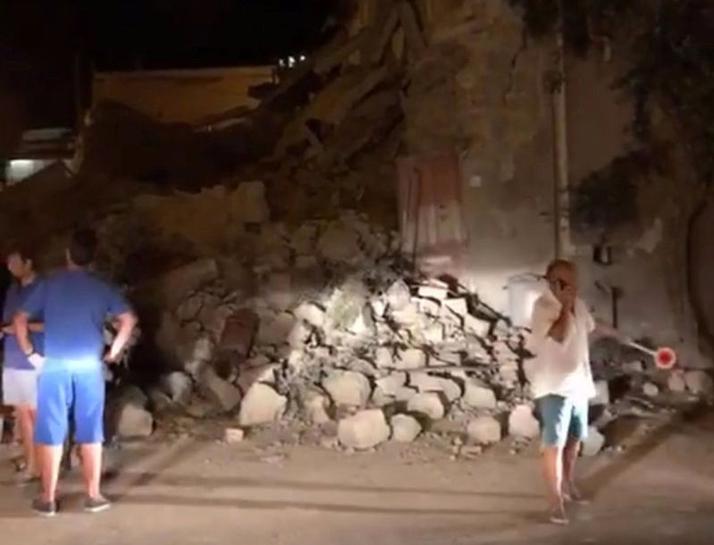 ROME (Reuters) – An earthquake of magnitude 4.0 hit the tourist-packed Italian island of Ischia, off the coast of Naples, on Monday night, killing at least one person and injuring some 25 others as buildings collapsed, officials said.

Residents and tourists on the island ran out on to the streets from homes and hotels.

Television images showed that about six buildings in the town of Casamicciola as well as a church collapsed in the quake, which hit at 8:57 p.m. (1857 GMT).

Local Civil Protection Department official Giovanni Vittozzi said one woman was killed when she was hit by falling masonry from a church and that officials were checking reports of another victim.

A woman is helped out of debris and rubble after an earthquake hit the island of Ischia, off the coast of Naples, Italy August 21, 2017 in this still image taken from video. MANDATORY CREDITVincenzo Precisano `

Helicopters and a ferry boat were bringing in more rescue workers from the mainland.

Roberto Allocca, a doctor from a local hospital, told Sky TG24 television that about 25 people had been treated for minor injuries. Most of the hospital had been evacuated and the injured were treated outside.

Some civil protection squads were already on the island because of brushfires.

The television reports said the buildings that collapsed appeared to have been inhabited and about 10 people were still unaccounted for.

The quake hit a few days before the first anniversary of a major quake that killed nearly 300 people in central Italy, most of them in the town of Amatrice.