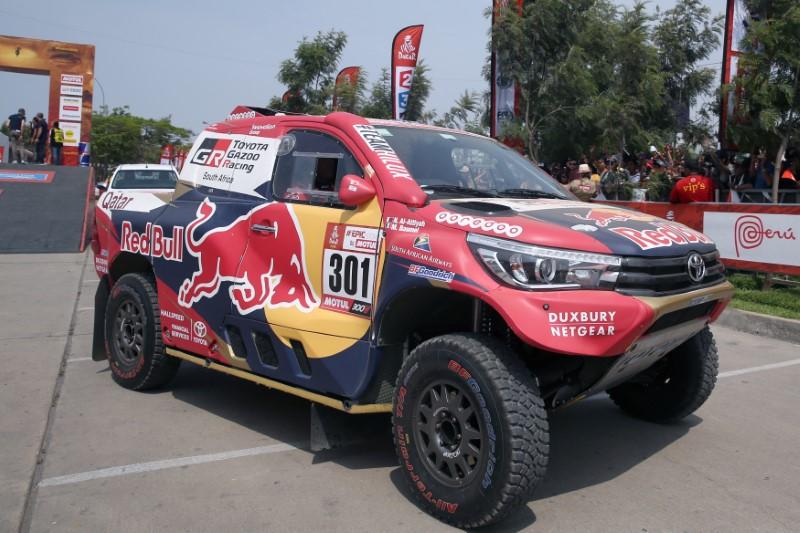 Al-Attiyah, driving a Toyota Hilux, ended the day with a 25- second lead over Dutch team mate Bernhard ten Brinke after the 35km special stage through the sand dunes around Pisco, down the coast from Lima.

While they enjoyed a trouble-free run, nine-times world rally champion Sebastian Loeb had a harder time and was six minutes off the lead after suffering brake issues with his Peugeot.

Loeb said his brakes failed after three kilometers of the stage, with the handbrake also failing.

”We went slowly, doing our best not to get stuck or bogged down,“ said the Frenchman. ”There were dunes with steep descents, so I had to stop accelerating 200 meters before that to avoid any risks.

“It was quite tricky, driving without brakes is exasperating. It was a difficult start,” he told the dakar.com website.

Peugeot’s reigning champion Stephane Peterhansel of France, who is chasing a 14th Dakar win, was in 11th place and two minutes 15 seconds off the pace.

In the motorcycles, KTM’s Dubai-based Sunderland ended the stage with a 32-second advantage over Yamaha’s French rider Adrien van Beveren.

The motorcycles will start after the cars in Sunday’s second stage, a 267km loop that starts and ends in Pisco.

“Tomorrow, if we open the road, I know it will be very difficult, but I‘m just really happy for today,” said al-Attiyah.

Of the 523 entrants in all categories, 114 were making their debuts in the 40th edition of the race, which ends in Cordoba, Argentina, on Jan. 20.

Reporting by Alan Baldwin in London, editing by Ed Osmond