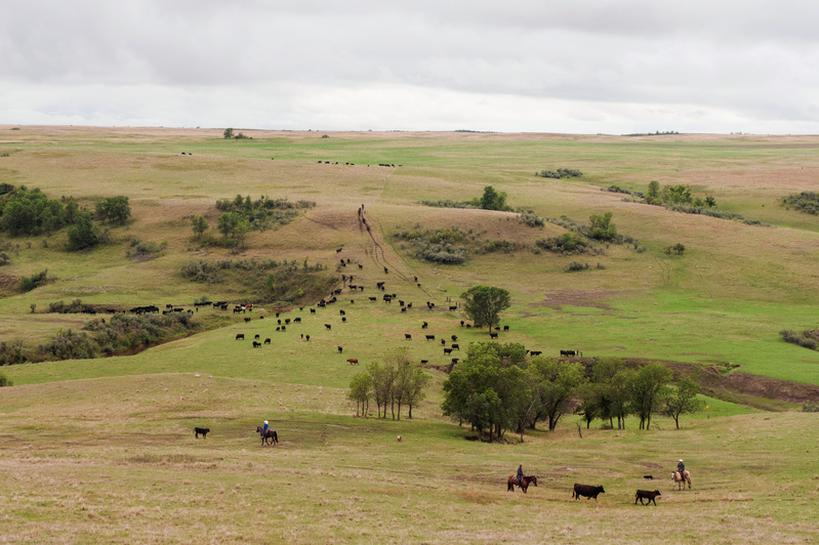 (Reuters) – Hundreds of livestock ranchers in the drought-stricken U.S. Northern Plains are embracing what organizers say is the first lottery designed to provide some much-needed relief to their operations.

The prize? Tons and tons of hay.

Ranchers in North Dakota, South Dakota and Montana have been suffering through the region’s worst drought in 30 years, which has withered grazing fields, causing a severe spike in the cost of hay to feed their animals.

While the ranchers search for affordable hay, some have been selling off cattle they cannot afford to feed. If the drought persists, cattle and beef prices will rise, livestock economists said.

“Thousands of producers who have invested their lives in their operations are being financially affected by the drought. It will change how they’re going to operate for the next several years in order to get through it,” Greg Lardy, head of North Dakota State University’s (NDSU) animal sciences department, said on Thursday.

The Dakotas and Montana represent 13 percent of the U.S. beef cow herd and 26 percent of hay acres, according to the U.S. Department of Agriculture.

In response to the drought, the North Dakota Department of Agriculture (NDDA) and NDSU helped organize a “hay lottery.” Farmers can register online for a chance to win a semi-truck load of hay – roughly 30 bales. (www.nd.gov/ndda/hay-lottery)

The lottery is the first of its kind in North Dakota, state officials said.

Participants must register by Aug. 31 and the drawing is tentatively scheduled for early September. Entry is free. Additional lotteries are possible if donations continue to pour in, officials said.

The United States is the largest producer and exporter of grass hay, the foundation of the diet for grazing animals such as cattle, according to the National Hay Association (NHA). Even so, only 4 percent of U.S. grass hay is exported, with the rest used domestically, NHA said.

The lack of adequate moisture in the Northern Plains this summer sent prices skyward.

Rancher Ralph Bieber stands with hay he cut from land that had been set aside for environmental conservation under a special exception due to a summer-long drought near Beulah, North Dakota, U.S. August 15, 2017.Andrew Cullen

Weston Dvorak, a rancher in Manning, North Dakota, said hay that cost him $60 per ton earlier this year is now going for $120 to $200, adding hundreds of thousands of dollars to his costs.

Dvorak has culled his 400-head beef cow herd by 10 percent after running short of the hay needed to see him through the winter. He cut some of his shriveled corn stalks and wheat for silage to help make up some of the shortfall.

Faced with the prospect of losing more of his livestock, Dvorak recently drove 300 miles (483 km) to bale hay on once federally protected conservation land, now freed up to assist struggling ranchers.

NDDA Commissioner Doug Goehring estimated there are more than 800 lottery entries from the three states so far, with NDSU research farms in Fargo, North Dakota, collecting the donations.

Though dry pastures have bedeviled Upper Plains ranchers, exports of U.S. hay are not expected to suffer because most of the crop is harvested closer to the U.S. East and West Coasts.

Continued drought in the Northern Plains will lead to increased culling of breeding stock that could eventually result in higher cattle and beef prices, analysts said.

NDSU’s Lardy recalled how the 2012 drought, the worst in half a century, sank the U.S. cattle herd to a 63-year low two years later – driving up cattle and beef prices nationally.

“We’re not there yet in terms of this drought, but continued dried conditions will lead to that eventually,” he said.

Meanwhile, each passing day claims more grazing land that is scattering animals to other states to be fed, watered and in some cases ultimately processed.

Reporting by Theopolis Waters in Chicago; Editing by Matthew Lewis

China reports 13 new COVID-19 infections, all infections imported
Can online technologies save youths from suicide? There are solutions, but hurdles too
Water supply to be restored within 24 hours in Selangor, says environment minister as cuts hit 5 million consumers
Evidence, intention and involvement: AGC, lawyers explain the decisions behind reducing murder charges
7 new COVID-19 cases in Singapore, including 1 in community