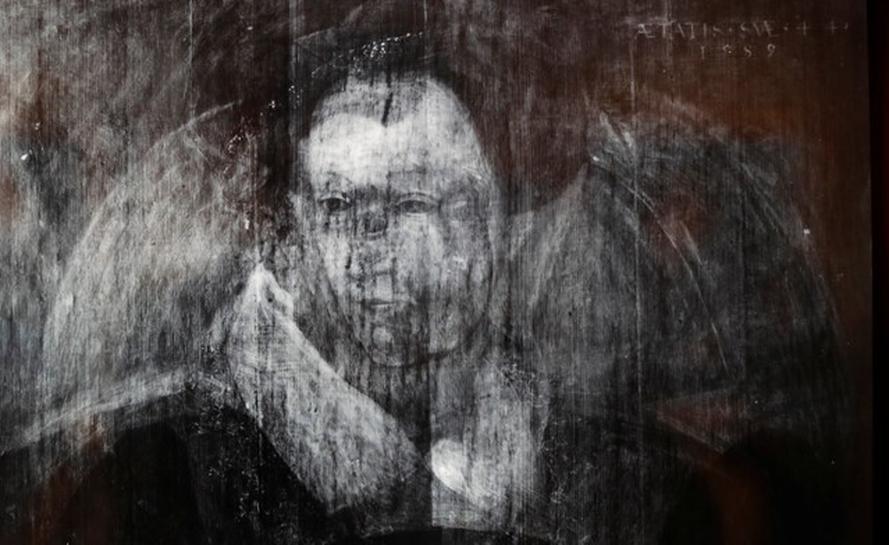 EDINBURGH (Reuters) – A rare, unfinished portrait believed to be of Mary, Queen of Scots has been found underneath another 16th-century painting after an X-ray revealed a ghostly likeness of the executed queen.

An unfinished portrait of a woman, thought to be Mary Queen of Scots, and a portrait of John Maitland, are displayed at the Scottish National Portrait Gallery during a media view, in Edinburgh, Scotland October 27, 2017. Conservator Caroline Rae discovered the unfinished portrait hidden beneath the painting of Maitland, using X-rays during a research project conducted at the National Galleries of Scotland (NGS) and the Courtauld Institute of Art. REUTERS/Russell Cheyne

A woman with distinct similarities to near-contemporary depictions of Mary was revealed during an examination of a portrait of Sir John Maitland, attributed to Adrian Vanson, a Dutchman who was court painter to Mary’s son King James VI of Scotland (James I of England).

The X-ray showed the shape of a woman’s face and the outline of her dress and hat beneath the upper layers of paint in a pose and a likeness similar to those of the queen at the time.

Mary was forced to abdicate in 1567 after she was implicated in her husband’s murder and was then imprisoned in England by her cousin Elizabeth I from 1568 and executed in 1587.

The painting usually hangs in the National Trust’s Ham House southwest of London.

“Vanson’s portrait of Sir John Maitland is an important picture in the National Trust collection, and the remarkable discovery of the unfinished portrait of Mary, Queen of Scots adds an exciting hidden dimension to it,” said David Taylor, Curator of Pictures and Sculpture at the National Trust.

“It shows that portraits of the queen were being copied and presumably displayed in Scotland around the time of her execution, a highly contentious and potentially dangerous thing to be seen doing,” he added.

The portrait and X-ray images will be on display at the Scottish National Portrait Gallery from Saturday.