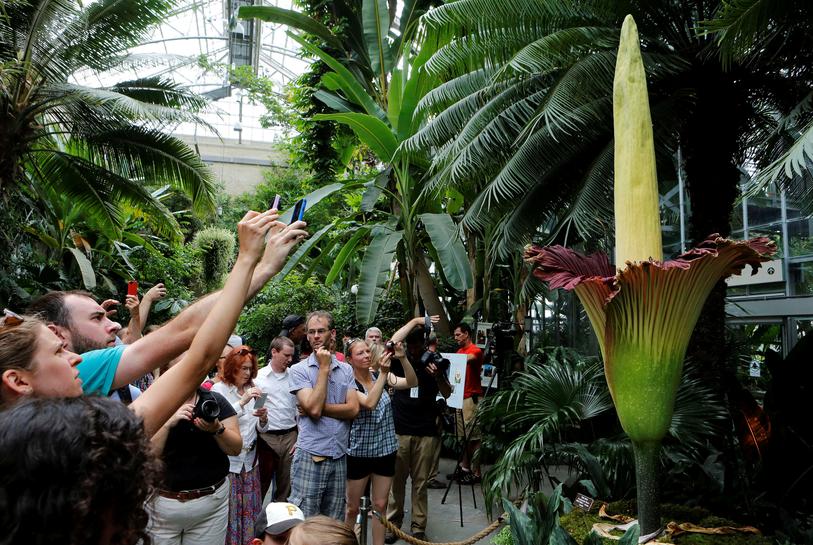 WASHINGTON (Reuters) – A botanic garden on the grounds of the U.S. Capitol is expecting a stinky first in coming days as a trio of so-called corpse flowers is due to open and release an odor likened to the smell of rotting flesh.

The event would mark the first time that three of the giant plants, also known as titan arums, have bloomed close to the same time at a North American institution, U.S. Botanic Garden spokesman Ray Mims said on Wednesday.

The biggest plant has surged to about 7 feet (2.13 meters) in height and is forecast to open between Thursday and Tuesday. The Botanic Garden, at the foot of Capitol Hill, will be open until 10 p.m. once the flower blooms to handle crowds.

“When you’re above it, you need a gas mask. This is really one of the rock stars of the plant kingdom,” said Todd Brethauer, a volunteer who carries a jar with a sample of the odor to give garden visitors a whiff.

The stench from the opened corpse flower, or Amorphophallus titanum, has been called a combination of rotting flesh, smelly socks, garlic and dirty diapers. It is a great draw for pollinating carrion beetles and flies.

Corpse flower blooms, once rare, have become more prolific, with seven occurring this summer in the United States. The increase resulted from the greater number of flowers in U.S. institutions, including 15 or 16 plants at Washington’s Botanic Garden, Mims said.

The reek’s main ingredient, dimethyl trisulfide, is known for its high potency and is added to normally odorless natural gas to give it a distinctive smell.

The interior temperature on a fully blooming flower reaches 115 Fahrenheit (46 Celsius), heat that helps spread the smell, Adams said. Simultaneous blooms are very rare since blooms occur only when individual plants have accumulated enough energy in their underground storage organs.

The plant is the world’s largest unbranched inflorescence, or cluster of multiple flowers that looks like a single one. It is native to the Indonesian island of Sumatra, and the three at the Botanic Garden were raised at one of its facilities.

The enormous spadix, or central spike, on the biggest of the three plants riveted passersby on Wednesday with its ashy maroon color and the glossy green leaf sheathing the base.

“It looks prehistoric … like something out of a movie,” said Julie Spack, 30, of Peterborough, New Hampshire, before she snapped a selfie with it.