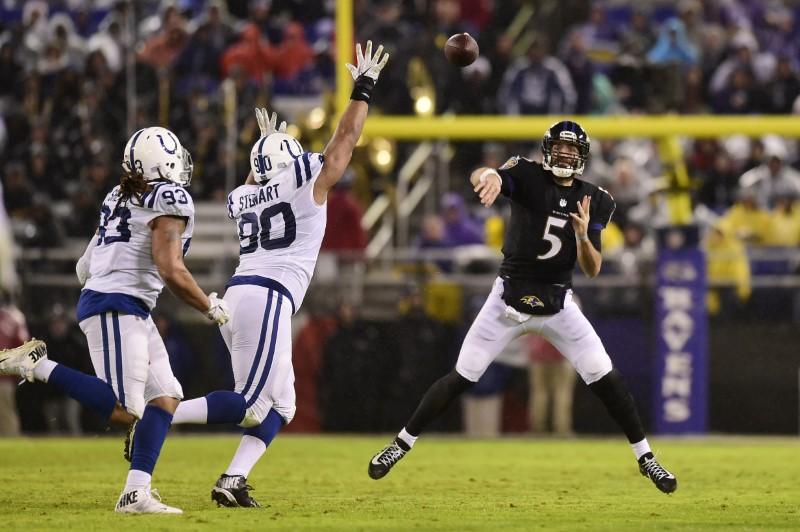 (The Sports Xchange) – Joe Flacco threw a pair of touchdown passes and the Baltimore Ravens held off the Indianapolis Colts for a 23-16 victory and took over the sixth playoff spot in the AFC on Saturday night.

Colts linebacker Anthony Walker blocked a punt with 2:36 left in the game, giving his team the ball on the Ravens’ 27-yard line. However, on fourth-and-10, Baltimore cornerback Maurice Canady knocked down a pass from Indianapolis quarterback Jacoby Brissett to seal the win.

The Ravens (9-6) overtook Buffalo (8-6) in the postseason race, and Baltimore currently has a better record against common opponents, which would be a tiebreaker. The Bills play at New England on Sunday.

Baltimore was able to move the ball against the Colts’ 30th-ranked defense, but struggled to find the end zone. Justin Tucker’s third field goal of the game increased their lead to 16-7 to open the second half.

Colts kicker Adam Vinatieri kept his team in the game with 48- and 38-yard field goals and Indianapolis trailed just 16-13 with 1:34 left in the third quarter.

Two penalties — a hold and pass interference — proved to be costly for the Colts (3-12) on the Ravens’ next drive. Flacco made them pay with a 4-yard touchdown pass to tight end Maxx Williams — his first score of the season. That put Baltimore ahead 23-13

Vinatieri’s 30-yard field goal pulled the Colts to within 23-16 with 4:33 left in the game. That gave Indianapolis just enough life to put itself in position to win the game.

Brissett did a solid job managing the game. He completed 16 of 33 for 215 yards with a touchdown. Brissett did not have a turnover and was sacked once.

Indianapolis receiver T.Y. Hilton created matchup problems for much of the game and finished with six receptions for 100 yards.

The Ravens’ opening drive stalled at the Colts’ 12 after 14 plays, and they settled for a 30-yard field goal by Tucker.

That led to a 6-yard touchdown pass from Flacco to Michael Campanaro and Baltimore led 10-0 with 12:16 left in the half.

The Colts responded when Frank Gore took a short pass from Brissett and ran it in for a 14-yard score.

Another 39-yard kick by Tucker with two minutes left made it 13-7,

Vinatieri missed a 60-yard attempt in the final seconds and the Ravens led 13-7 at the break.

The Packers, with quarterback Aaron Rodgers on injured reserve, receiver Davante Adams inactive and receiver Jordy Nelson lost for the second half, simply lacked the horses to challenge the Vikings.

Minnesota won for the 10th time in 11 games by knocking off the rival Packers 16-0 in a game played in sub-10 degree temperatures.

For the fourth time in their last six games, the Vikings (12-3) allowed fewer than 10 points. It was their first shutout victory since 1993. Harrison Smith’s second interception of the night preserved the achievement.

Brett Hundley, making his eighth start for Rodgers, was ineffective, going 17 of 40 for 130 yards and two interceptions. He wasn’t helped by a handful of drops, a makeshift offensive line and the lack of two of the team’s top weapons.

Green Bay trailed 10-0 midway through the third quarter when it faced a fourth-and-7 from the Vikings’ 36-yard line. Without Adams, who ranks second in the NFL with 10 touchdown catches but was out with a concussion suffered last week, and Nelson, who exited late in the second quarter with a shoulder injury, Hundley threw the ball to Michael Clark.

Clark, an undrafted free agent, recently was promoted from the practice squad. A former college basketball player, he played one year of football at Marshall. The ball was sailed over Clark’s head.

The Vikings tacked on a 20-yard field goal by Kai Forbath on the ensuing possession to extend the lead to 13-0. The key play on the drive came when Keenum ran toward the line of scrimmage, backpedaled and threw a short pass to tight end David Morgan, who broke three tackles for a gain of 23.

On fourth-and-4 from the Vikings’ 14 early in the fourth quarter, Hundley threw a back-shoulder pass to Clark in the end zone but Xavier Rhodes was in position to prevent the touchdown. Late in the fourth quarter, on fourth-and-10, Hundley went deep to Clark but was incomplete against cornerback Trae Waynes. The Packers pleaded for interference but the only flag was for unsportsmanlike conduct for arguing the noncall.

Smith’s second interception, on fourth-and-1, put the game away.

The Vikings struck first, taking their opening possession and getting a 49-yard field goal by Kai Forbath.

Three consecutive runs totaling 23 yards by Murray set up a play-action pass to Diggs. Diggs got behind cornerback Josh Hawkins and drew an interference penalty for a gain of 39 to the 6-yard line. One play later, Case Keenum lofted a pass to Diggs in the back of the end zone, with Diggs getting both feet down for the touchdown and a 10-0 lead.