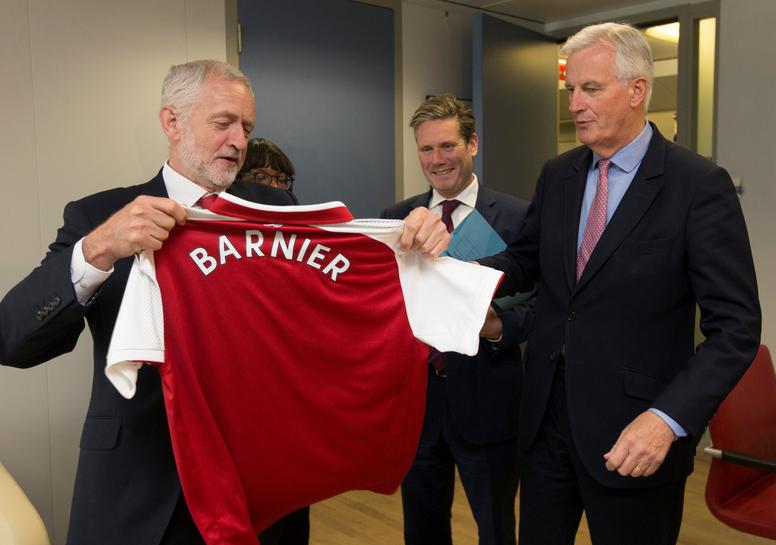 BRUSSELS (Reuters) – What’s red and international and led by a Frenchman?

For Jeremy Corbyn on Thursday, the answer seemed to be Arsenal Football Club, whose jersey the Labour leader brought to Brussels as a gift for EU Brexit negotiator Michel Barnier.

The French conservative ex-minister who runs the team handling Britain’s withdrawal appreciated the thought from the left-winger in whose London constituency Arsenal’s cosmopolitan stars play under their veteran French coach Arsene Wenger.

“Appropriate Arsenal gift from @jeremycorbyn to @MichelBarnier, defender of EU unity, committed to fair play on #Brexit, and a sports fan,” an aide to Barnier tweeted after the two men met over lunch to discuss Britain’s EU withdrawal.

Arsenal fan Corbyn boasted that the club has played in Europe in all 20 seasons under the Alsatian Wenger and said Barnier was “very happy” with the shirt – and with a copy of Labour’s manifesto. “He’s got two things in red,” Corbyn joked.

Barnier recalled his time running the 1992 Winter Olympics and, offering Corbyn a vintage tourist poster for his native Savoy Alps, reminded him of Anglo-French business links in the region, notably in the British-built ski resort of Meribel.

Corbyn, who slashed Conservative Prime Minister Theresa May’s majority in an election last month but has promised to honour last year’s referendum vote to leave the EU, was in Brussels to push for a “jobs-first Brexit”, though both men stressed that only May’s government is actually negotiating.

Among key issues at next week’s first full round of talks is an EU demand that Britain pay tens of billions of euros. London is set to haggle hard over the figures and Corbyn stressed that no cash sums came up in his talks in Brussels.

So while the Arsenal jersey was emblazoned “BARNIER” on the back, it was perhaps also fitting that it carried no number.