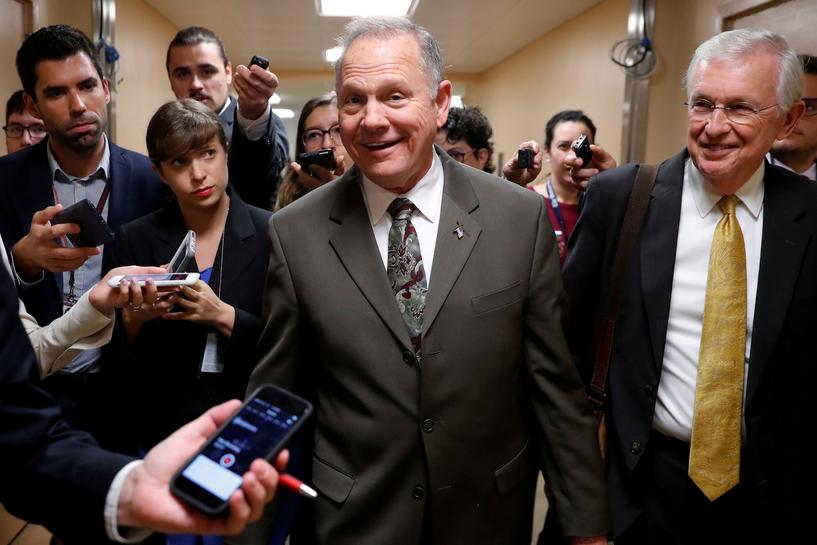 (Reuters) – The national campaign wing for U.S. Senate Republicans cut fund-raising ties on Friday with Roy Moore, the party’s nominee for a special Senate race in Alabama, a day after sexual misconduct allegations upended his front-runner bid for the seat.

The move was the latest sign the Republican establishment, holding onto a slim 52-48 majority in the Senate, was abandoning an insurgent candidacy heavily promoted by U.S. President Donald Trump’s former political strategist, Steve Bannon.

Meanwhile, Democrats and progressive groups, emboldened by Democratic election victories in Virginia and New Jersey on Tuesday, sought to capitalize on the accusations in support of the Democratic nominee, former U.S. Attorney Doug Jones.

Moore, a controversial former judge and a staunch Christian conservative, was accused by a woman of initiating a sexual encounter in 1979 when she was 14 years old and he was a 32-year-old prosecutor, the Washington Post reported on Thursday.

Three other women said he pursued them when they were between the ages of 16 and 18, though none accused him of sexual contact.

The 70-year-old Moore again denied any wrongdoing on Friday during an appearance on conservative commentator Sean Hannity’s national radio show.

“These allegations are completely false and misleading,” Moore said.

The National Republican Senatorial Committee, which helps elect Republicans to the Senate, filed paperwork with federal election officials on Friday severing its fund-raising relationship with Moore for the special election on Dec. 12.

Numerous prominent Republicans have either called on Moore to drop out immediately, as Arizona Senator John McCain did on Thursday, or said he should do so if the allegations prove true, including Senate Majority Leader Mitch McConnell.

“Moore is unfit for office and should step aside,” former Republican presidential nominee Mitt Romney said Friday on Twitter.

Senator Mike Lee of Utah, who initially took the same stance as McConnell, tweeted on Friday that could “no longer endorse” Moore’s candidacy, after reading “the detailed description of the incidents, as well as the response from Judge Moore and his campaign.” Senator Steve Daines of Montana likewise said he was pulling his endorsement.

But several Alabama Republican officials did not waver in their support of Moore, who scored a decisive primary victory in September over Luther Strange, the incumbent appointed to fill the seat on an interim basis when Jeff Sessions was named U.S. attorney general.

The race had been seen as a long shot for Democrats in Alabama, which has not elected a Democratic senator in a quarter century. Jones was trailing by double digits in some opinion polls.

The Democratic Party has been coordinating with Jones behind the scenes, wary of providing overt support such as television advertising in the deeply Republican state.

Progressive groups MoveOn, Democracy for America and Indivisible expect the allegations against Moore to boost their grassroots efforts to engage Democratic voters in Alabama.

“We were planning to go bigger already,” said Matt Blizek, a mobilization coordinator for MoveOn. “With the news and the fact that this is a close race, that’s only going to increase.”

A win for Jones could transform the political picture in Washington, narrowing the Republican majority down to just one vote.

Moore has come back from controversy before.

He was twice forced out of his position as the state’s chief justice, once for refusing to remove a Ten Commandments monument from the courthouse and once for defying the U.S. Supreme Court decision legalizing same-sex marriage. Democrats have highlighted his penchant for incendiary statements about Muslims and homosexuality.

Zac McCrary, a veteran Democratic pollster based in Birmingham, Alabama, said he now sees Jones as the favorite.

“Roy Moore had much less margin for error than a Republican does traditionally in Alabama,” McCrary said.

But Jonathan Gray, a Republican consultant in Alabama, said voters were already questioning the veracity of the Washington Post story, given its timing. The only development that could sink Moore’s candidacy is a write-in campaign from a Republican backed by the party, he said.

Absent that, he said, all the analysis in the world will not change a simple fact: “Roy Moore wins December 12.”