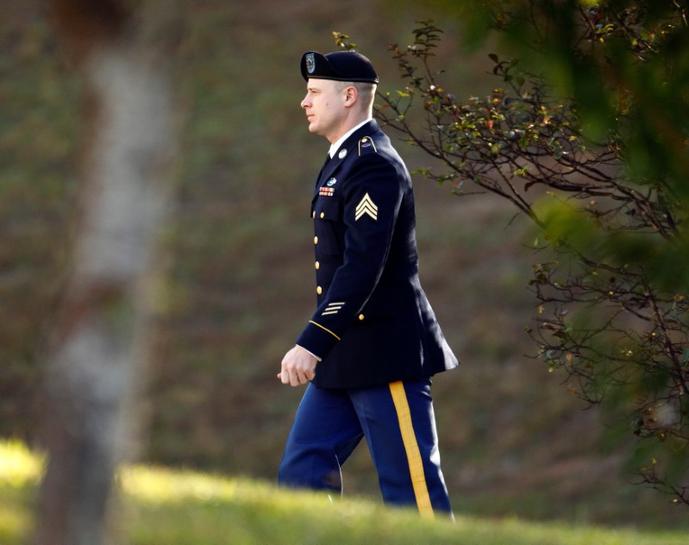 FORT BRAGG, N.C. (Reuters) – In the weeks after U.S. Army Sergeant Bowe Bergdahl walked off his remote post in Afghanistan in June 2009, the service members who searched for him carried out risky rescue attempts and endured harsh living conditions, they testified on Wednesday.

Bergdahl had been captured by the Taliban, and the Army knew it had to act fast before he was taken across the border to Pakistan, Colonel Clinton Baker, his battalion commander, said at Bergdahl’s sentencing hearing at North Carolina’s Fort Bragg.

Soldiers took direct fire and attacks from improvised explosive devices every day in the first six weeks of the search, Baker said. Fresh socks and T-shirts were flown to one unit whose clothes rotted off during a 37-day mission.

”The only time you slept was when you couldn’t stay conscious anymore,“ Baker said. ”Everybody was out looking. That was it. We were tapped out.”

Last week, Bergdahl, 31, pleaded guilty to desertion and misbehavior before the enemy. The consequences of his actions for fellow troops are now the focus for prosecutors seeking his punishment.

Bergdahl said he left his combat outpost in Paktika province to report “critical problems” in his chain of command. The Idaho native suffered torture and neglect during five years in captivity before being released in a 2014 Taliban prisoner swap criticized by Republicans. With his plea, he could face up to life in prison and a dishonorable discharge. [L2N1MR0G6]

Former Navy SEAL James Hatch (L), shot in the leg during a July 2009 attempt to rescue U.S. Army Sergeant Bowe Bergdahl in Afghanistan, sticks out his tongue while walking with his service dog and accompanied by his legal counsel into the courthouse to testify on the second day of Bergdahl’s sentencing proceedings at Fort Bragg, North Carolina, U.S., October 25, 2017. REUTERS/Jonathan Drake

He testified on Wednesday that he has had 18 medical procedures to repair the damage to his leg after being shot by an enemy fighter’s AK-47 during a July 2009 raid. A military dog named Remco died during that effort.

“Imagine putting yourself on the side of a mountain with little water, little sleep, little chow, having not showered in 10 days, and not knowing when you’re going to get to talk to your family next,” Billings said. “That’s about what it was like.”

Statements by President Donald Trump loom over the case.

The soldier’s defense attorneys say the Republican, who as a candidate referred to Bergdahl as a “a no-good traitor who should have been executed,” has unlawfully influenced the proceedings.

At a press conference last week on the day of Bergdahl’s guilty plea, Trump said he could not talk about the case, then added: “But I think people have heard my comments in the past.”

The defense says Bergdahl should be spared prison time because of the president’s criticism. Army Colonel Jeffery Nance, the military judge in the case, said in court on Wednesday that he was still considering the defense motion.

The sentencing proceedings resume on Thursday.