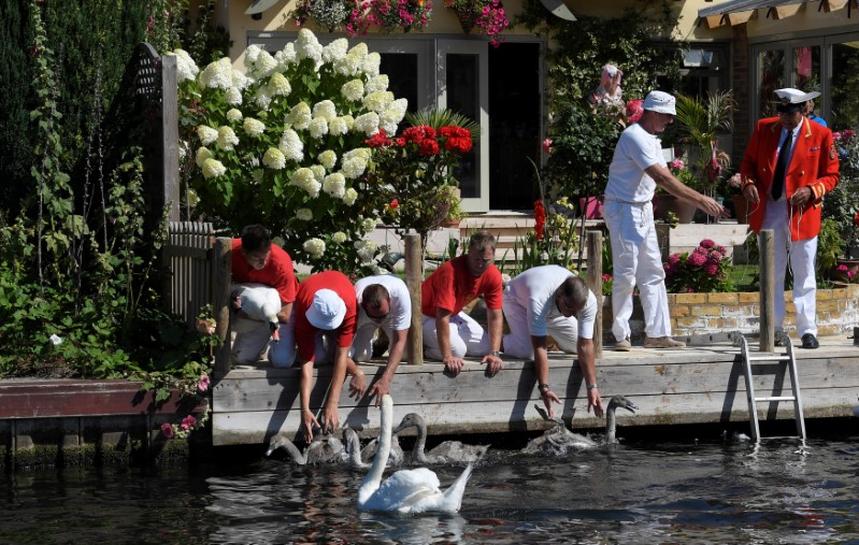 SHEPPERTON, England (Reuters) – Six old-fashioned skiffs interrupted the sleepy pace of life on a stretch of the

river Thames on Monday as teams embarked on the annual “upping” – a combined census and health visit for swans.

The upping sees three teams, one representing Queen Elizabeth and one each representing the old trade associations of the Vintners and Dyers livery companies, patrol the river for five days, and capture, tag and then release any families of swans with young.

“It’s tradition – it’s part of British history”, David Barber, the swan marker on queen’s crew told Reuters of the endeavour dating back to the 12th century, when swans were an important food source.

The upping is in part about pomp and ceremony. Swan markers cruise down the river, ancient standards fluttering from the back of their vessels, in gold-trimmed blazers and naval-style peaked caps, topped off with a swan feather in the brim.

But the modern upping is also about conservation. The uppers assist injured young swans, most often by removing fishing lines that the birds have become tangled in.

They also monitor the population of young birds, which has declined sharply in recent years. Last year, the uppers tagged 72 cygnets on the stretch of the river between Sunbury and Abingdon. The year before they found 83, and 120 the year

Birds are returned to the water following an examination as swans and cygnets are weighed, measured, inspected and recorded in the annual counting of The Queen’s swans, known as ‘Swan Upping’, along the River Thames near Chertsey, Britain July 17, 2017.Toby Melville

Natural predators, dog attacks, egg theft and nest vandalism are among factors responsible for the decline.

To catch the birds, the crews encircle a family against the river bank, moving closer until the swans can be plucked out of the water by hand.

“You hold its neck, put an arm around its wings and body and lift it out of the water. Then they are tied with some very soft ties, around the wings and around the legs,” Barber said.

They are then weighed, measured and checked for injuries.

Aside from some irritated grunting, the 10 or so birds being caught and inspected on Monday showed little sign of distress.

The uppers themselves are something of a celebrity presence on the river, with crowds of mostly elderly spectators flocking to see them pass by.