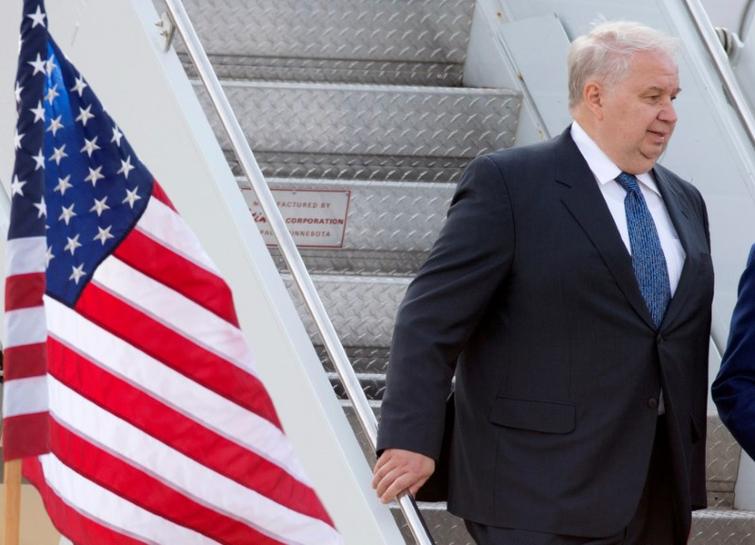 The Russian embassy in Washington said on its Twitter feed that Minister-Counseler and Deputy Chief of Mission Denis V. Gonchar would serve as Charge d’Affaires until Kislyak’s successor arrived.

Kislyak, who held the post since 2008, is expected to be replaced by Russian Deputy Foreign Minister Anatoly Antonov.

Antonov’s nomination for the post, which has yet to be approved by the Kremlin, comes at a time of intense scrutiny over Moscow-Washington relations following U.S. allegations that Russia meddled in the U.S. election last year.

Kislyak’s name has emerged in relation to several of Trump’s associates as a special counsel and congressional panels investigate Russian meddling and possible ties with the Trump campaign.

On Friday, the Washington Post reported Kislyak was overheard by U.S. spy agencies telling his bosses he had discussed campaign-related matters, including issues important to Moscow, with Jeff Sessions during the 2016 presidential race.

As Attorney General, Sessions recused himself in March from matters connected to an investigation by the FBI following his admission he had talked to the Russian envoy.

Sessions has denied discussing campaign issues with Russian officials and has said he only met Kislyak in his role of U.S. senator.

Former White House national security adviser Michael Flynn was forced to resign in February after it became known that he had failed to disclose the content of conversations he had with Kislyak and misled the vice president about their meetings.

The White House disclosed in March that Kushner met with Kislyak at Trump Tower in December 2016, in addition to seeing Kislyak when he attended an April 2016 campaign speech in Washington. The White House said the December meeting was to establish “a line of communication.”

Kushner also had phone calls with Kislyak between April and November 2016, Reuters reported. Kushner’s attorney has said that Kushner had “no recollection” of the calls as he had participated in “thousands of calls in this time period.”

Moscow has denied any interference, and Trump has said his campaign did not collude with Russia.

The White House said this week Trump would nominate Jon Huntsman as his new ambassador to Russia.

Thai parliament delays decision on constitution changes
The Big Read: Floored by COVID-19, can SIA soar again? Fate of Singapore’s aviation hub rests on it
Anwar Ibrahim says he has ‘strong majority’ to form a new government in Malaysia
Malaysia to place COVID-19 restrictions in some parts of Sabah
‘A step in the right direction’: Thailand’s tourism operators welcome special visa for foreigners