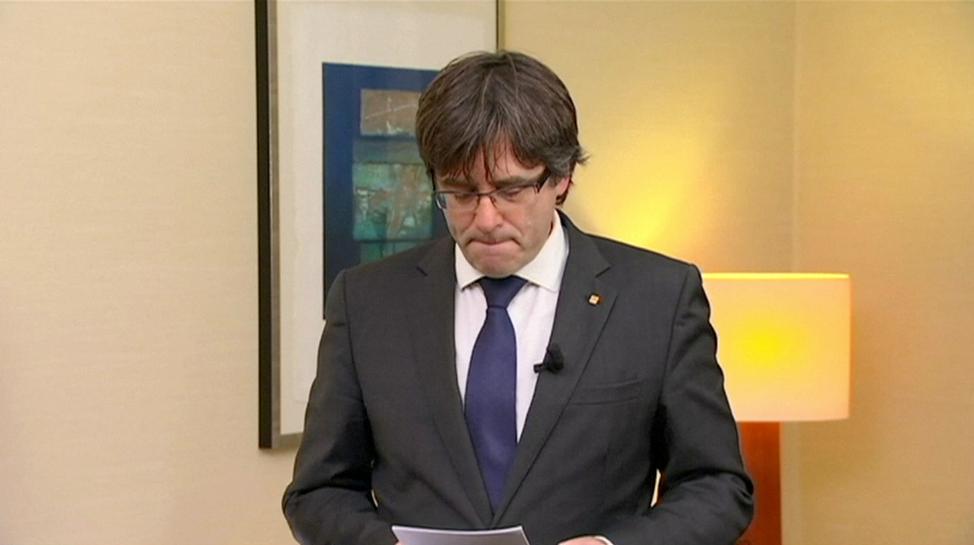 FILE PHOTO – Sacked Catalan President Carles Puigdemont makes a statement in this still image from video calling for the release of “the legitimate government of Catalonia”, after a Spanish judge ordered nine Catalan secessionist leaders to be held in custody pending a potential trial over the region’s independence push, in Brussels, Belgium, November 2, 2017. TV3 via REUTERS TV

He is wanted by Madrid for actions related to his push for the region’s secession from Spain.

Puigdemont’s move comes as two polls suggested pro-Catalonia independence parties will together take the most seats in December’s regional election although they may fall just short of a majority needed to revive the secession campaign.

Parties supporting Catalonia remaining part of Spain would divide seats but garner around 54 percent of the vote, the polls suggested.

Spanish Prime Minister Mariano Rajoy called the Dec. 21 election after firing the previous government and imposing direct rule over the autonomous region following a unilateral declaration of independence by Catalan lawmakers on Oct. 27.

According to a GAD3 survey of 1,233 people conducted between Oct. 30 and Nov. 3 and published in La Vanguardia newspaper, pro-independence parties ERC, PDECat and CUP would take between 66 and 69 seats in the 135-seat parliament.

A second poll taken over the same period for the conservative newspaper La Razon echoed the GAD3 survey, showing pro-independence parties would capture the most votes though still fall just shy of a parliamentary majority with 65 seats.

Other seats would be generally divided between parties supporting the region continuing to be part of Spain, but they parties are not allied.

Voter participation, however, will rise to a record of 83 percent, the GAD3 poll showed.

Catalonia’s statehood push has tipped Spain into its worst political crisis since its return to democracy four decades ago as surging pro-secession sentiment in the region has in turn kindled nationalism across the country.

Puigdemont traveled to Belgium shortly after Madrid took control and now faces charges for rebellion, sedition, misuse of public funds, disobedience and breach of trust relating to the secessionist campaign.

FILE PHOTO – Catalan separatist flags are held up as fireworks go off in Sant Jaume Square in front of the Catalan regional government headquarters during celebratrions after the Catalan regional parliament declared independence from Spain in Barcelona, Spain, October 27, 2017. REUTERS/Yves Herman

On Saturday, Puigdemont – who PDECat said on Sunday would lead the party in the election – called for a united Catalan political front in the face of the elections.

On Thursday, nine members of his sacked cabinet were ordered by Spain’s High Court to be held on remand pending an investigation and potential trial.

One member of the dismissed cabinet, Santi Vila, was freed after paying bail of 50,000 euros ($58,035) on Friday. The other eight could remain in custody for up to four years.

According to the GAP3 survey, 59 percent believed legal action against Puigdemont was unjustified while 69.3 percent said that the jailing of the Catalan politicians would give the independence cause a boost at the ballot box.

Catalan civic groups Asamblea Nacional Catalana and Omnium Cultural – whose leaders were imprisoned last month on sedition charges – called for a general strike on Nov. 8 and a mass demonstration on Nov. 11 to protest the detentions.

A rally in Barcelona on Sunday, however, attracted just a few hundred people, a long way from the hundreds of thousands to join pro-independence marches in October, many waving the regional flag and carrying protest signs.