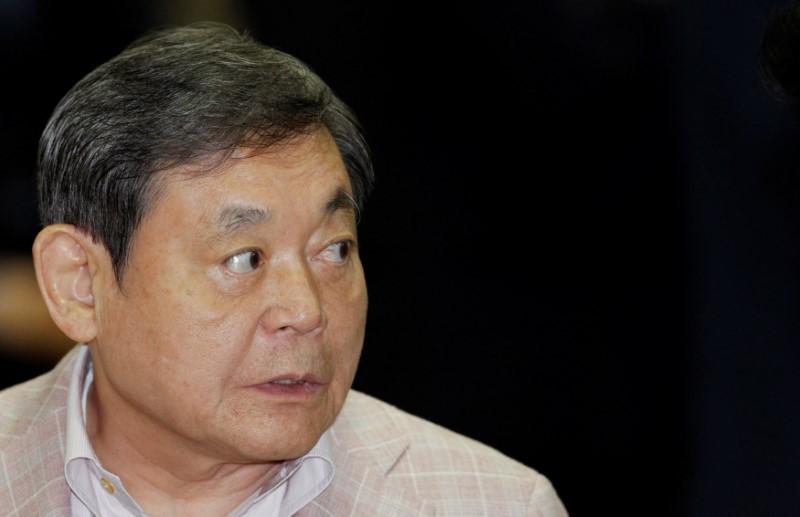 SEOUL (Reuters) – Lee Kun-hee, the chairman of Samsung Electronics (005930.KS) was named by South Korean police on Thursday as a suspect in an 8.2 billion won ($7.5 million) tax evasion case that involved the use of bank accounts held by employees.

A series of scandals have dogged the family of Samsung, the country’s biggest business empire. The chairman’s son Jay Y. Lee, heir to the Samsung Group, was released from detention earlier this week after an appeals court halved his sentence for bribery and corruption to 2-1/2 years and suspended it for four years.

The elder Lee has been hospitalized since suffering a heart attack in 2014, and until his imprisonment Jay Y. Lee had been regarded as the de facto head of the group.

Police said elder Lee could not be questioned due to his physical condition and Samsung declined comment.

“Samsung chairman Lee Kun-hee and a Samsung executive managed funds in 260 bank accounts under names of 72 executives, suspected of evading taxes worth 8.2 billion won,” Korean National Police Agency said in a statement, planning to send the case to prosecutors.

Police added that the accounts, holding some 400 billion won, were found in the course of their probe into alleged improper payments for the renovation of Lee’s family residence.

The graft case that led to the younger Lee’s arrest last year and brought down the former president Park geun-hye prompted Samsung to vow to improve transparency in corporate governance and grant heads of the group’s affiliates more autonomy from the Lee family.

The group dismantled its corporate strategy office in late 2017.

Though Jay Y. Lee has not been seen back at the office since his release on Feb.5, but members of the Korean business community expect him to take up the reins once again, and invest more in the business to create jobs that might help soothe public anger.

Reurning home from prison, the younger Lee apologized for not showing his best side and said he would do his best but did not give specifics on his business plans.

While he spent a year behind bars, Samsung Electronics, the world’s top semiconductors maker, earned record profit as it benefited from a memory chip “super cycle”.

It is not the first time the elder Lee has been investigated for tax evasion. He was convicted in 2009 and later pardoned for tax evasion after being embroiled in a scandal that also involved the use of accounts held by trusted employees.