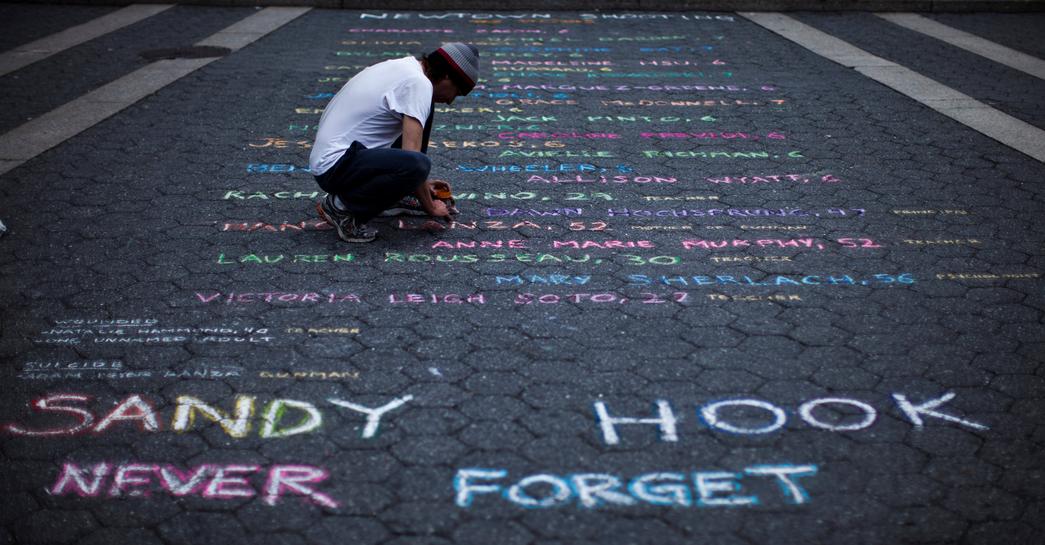 HARTFORD, Conn. (Reuters) – Connecticut’s highest court is set to hear arguments on Tuesday in a closely watched case brought by the families of the victims of the 2012 Sandy Hook Elementary School shooting against the maker of the assault rifle used by the killer.

FILE PHOTO: Street artist Mark Panzarino, 41, prepares a memorial as he writes the names of the Sandy Hook Elementary School victims during the six-month anniversary of the massacre, at Union Square in New York, June 14, 2013. REUTERS/Eduardo Munoz/File Photo

The families of nine of the victims and one survivor have said manufacturer Remington Arms Company Inc [REARM.UL], along with a gun wholesaler and local retailer, should be held responsible for the carnage at the Newtown, Connecticut, school because they marketed the weapon based on its militaristic appeal.

It is a somewhat novel legal argument the families hope will help them overcome a federal law enacted by U.S. Congress in 2005 to shield gun manufacturers from liability for how their products are used.

Remington did not respond to requests for comment. In court filings, the company has said the families’ claims, first filed in 2014, are barred by the 2005 law.

A lower court judge agreed with the gun maker and dismissed the families’ lawsuit in 2016. But the Connecticut Supreme Court agreed to hear the case a week after the families filed their first appeal.

Adam Lanza, 20, used a Remington AR-15 Bushmaster rifle, a semi-automatic civilian version of the U.S. military’s M-16, to kill 20 schoolchildren between the ages of 6 and 7, as well as six adult staff members.

The families claim Remington and the other defendants “extolled the militaristic and assaultive qualities” of the AR-15, advertising the rifle as “mission-adaptable” and “the ultimate combat weapons system” in a deliberate pitch to a demographic of young men fascinated by the military.

The families said Lanza was part of that demographic and cited media reports saying he previously expressed a desire to join the army. The rifle was bought by Lanza’s mother, whom he also killed, as a gift for him or for the two of them to share, the lawsuit claims.

The families’ argument is based on the legal doctrine of negligent entrustment, in which a product is carelessly sold or given to a person at high risk of using it in a harmful way. Negligent entrustment is specifically excepted from the 2005 gun maker shield laws.

The argument has historically been used where someone lends a car to a high-risk driver who goes on to cause an accident. It has met with some success in lawsuits against gun shop owners, but legal experts said it has never been used before to target a manufacturer.

David Studdert, a Stanford law professor, said he thought it was a tough argument for the families to make because negligent entrustment has traditionally involved someone having direct knowledge that another person poses a risk.

If the Sandy Hook families are successful, Timothy Lytton, a law professor at Georgia State University, said he would expect the U.S. Supreme Court to take up the case.