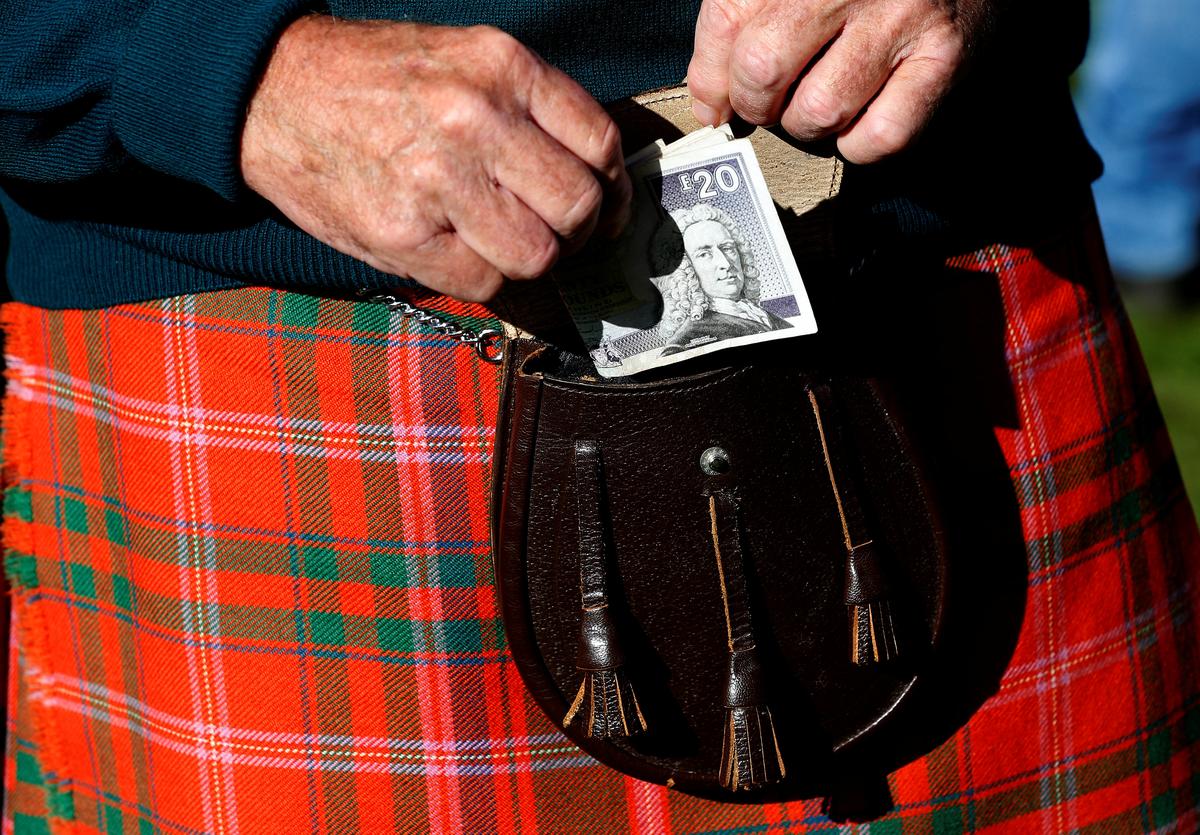 EDINBURGH (Reuters) – Scotland’s government said on Thursday it will raise taxes on higher earners and increase public sector pay, using powers to levy higher income tax rates than the rest of Britain for the first time since it was given its own parliament 20 years ago.

FILE PHOTO: A man puts money in his sporran at the Birnam Highland Games in Scotland, Britain August 30, 2014. Scotland will hold a referendum on independence on September 18. REUTERS/Russell Cheyne/File Photo

The budget, set out by the pro-independence Scottish government, aims to draw a contrast between Scotland’s policies and those of the national government in London, which has kept tight controls on public-sector pay to hold down deficits.

Despite imposing top rates 1 percentage point higher than in the rest of Britain, the Scottish government said 70 percent of Scottish taxpayers will not pay more than they previously did, and 55 percent would pay less than elsewhere in Britain.

London granted Scotland more powers to set its own income tax rates last year under a law passed to fulfil a promise made to woo voters on the eve of an independence referendum in 2014, when Scots voted to stay in the United Kingdom.

Last year the Scottish government set income tax earnings thresholds that were slightly different from those elsewhere in Britain for the first time, but kept the same overall rates.

The Scottish administration hopes to show voters that it can manage the country’s economy while setting different priorities from London. That would burnish the case for independence, still the long-term goal of the Scottish National Party that runs the Scottish government.

Scottish First Minister Nicola Sturgeon has said a new independence referendum should be held after Britain voted last year to leave the European Union while most Scots voted to stay. She is not pushing for a quick new vote after the SNP lost support in a national election in June.

Thursday’s budget plan offered public sector workers such as nurses, firefighters and teachers earning less than 30,000 pounds ($40,242) a year a 3 percent pay rise, and those earning more than that a 2 percent pay rise.

The proposals were more generous than a recent relaxation of a public sector pay cap announced by Britain’s government.

FILE PHOTO: Scotland’s First Minister Nicola Sturgeon arrives to offer her reaction to the attack in Manchester to journalists in Edinburgh, Britain May 23, 2017. REUTERS/David Cheskin/Pool/File Photo

Scotland still has little room for manoeuvre on spending. Forecasts published with the budget showed it is set to grow at a much slower clip than Britain as a whole.

Annual growth in Scotland is due to reach only 1 percent in 2022, according to the Scottish Fiscal Commission, an official forecaster independent of the Scottish government. It cited waning oil and gas output as well as slow productivity growth which is a problem for the overall British economy.

Britain’s government said it was “deeply disappointed” by the tax hikes. “By making Scotland the highest taxed part of the UK, the Scottish government risks damaging, rather than growing, our economy,” said David Mundell, who serves as the Scotland secretary in the British cabinet in London.

Mackay said his income tax changes would make the tax system in Scotland fairer. The top two rates of income tax will be raised by one percentage point to 41 and 46 percent.

The United Kingdom comprises England, Scotland, Northern Ireland and Wales. Scotland was given some spending powers in a devolution process that began in the 1990s, and has slowly been given powers to raise its own funds. But the lion’s share of its finances are still set by the UK government in London.

The Scottish Chambers of Commerce said it was worried the tax changes could hurt investment.

“Our continuing concern is primarily with outside investors’ perception of even slight increases in tax rates, on the overall costs of doing business here against the rest of the UK,” it said.

“In combination, this means limited increases in average earnings and a more modest outlook for employment growth in the coming years compared to the recent past,” it said.