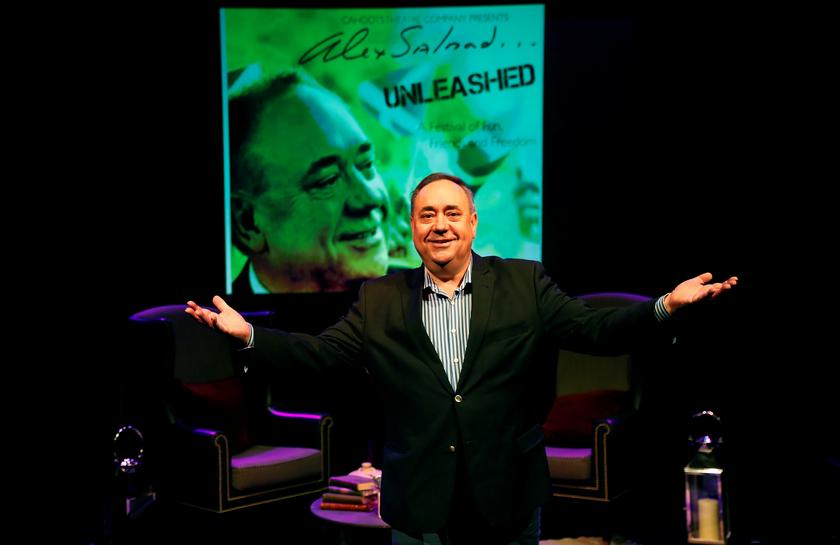 EDINBURGH (Reuters) – Former Scottish first minister Alex Salmond charmed a home crowd at the first of his Edinburgh Fringe shows on Sunday, as he and a surprise guest, Brexit Minister David Davis, both took swipes at Brexit, the prime minister and themselves.

“Alex Salmond Unleashed” at the world’s largest arts festival is designed as a breather from a diet of politics as usual. Salmond, who is often outspoken, is the senior Scottish nationalist to have lost his parliamentary seat in Britain’s June election and he also used the sell-out show to promote his belief in Scottish independence.

The UK is on the brink of leaving the European Union, although a majority in Scotland and Northern Ireland, two of its four nations, voted to stay in the EU, opening rifts in the UK’s union.

So far, the government’s position on what it wants from Brexit, which will sever 40 years of ties with the EU, has been unclear. An election called in June to strengthen the government’s majority instead weakened it.

Davis’ was a surprise appearance, since he heads the department which will decide how Brexit is achieved. Salmond’s party wants Scotland to stay in the EU, but it would split three centuries of trade and political ties with England via Scottish secession.

Both ribbed May for her lack of humour, Davis recounting that he had jokingly suggested to the prime minister that the department for exiting the EU could be called “department X” to which her response was “not a flicker,” he said.

Both men made jokes about the infighting in the government over exactly how Britain will leave the EU. Davis said the so-called “transition period” for leaving the EU meant something different to everyone, “including me on different days”.

After months of wrangling over what Britain wants from Brexit, ministers on Sunday set out a united approach to Brexit.

Salmond, who is still a key influence in the Scottish independence debate, said he was “increasingly attracted” by the idea of European Free Trade Agreement membership for Scotland.

He also predicted in comments to journalists on Saturday that Scotland would hold another referendum that would win independence within three or four years.