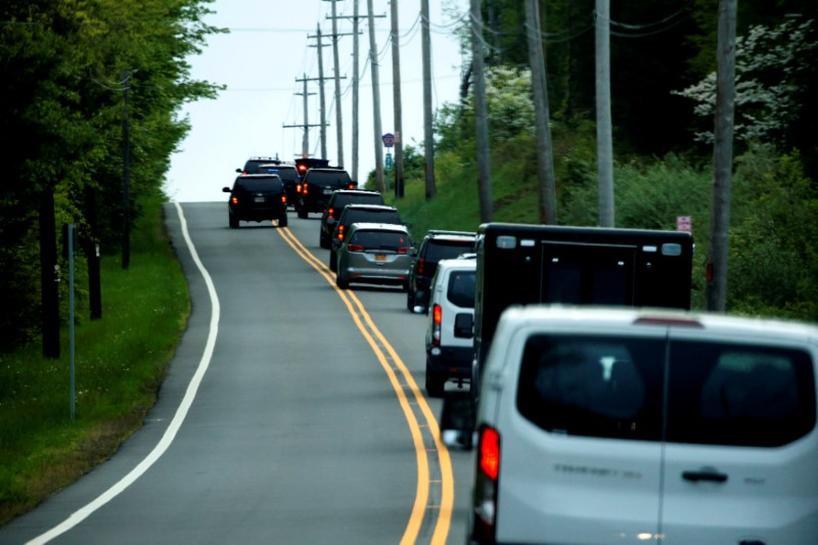 BEDMINSTER, N.J. (Reuters) – Three military helicopters hovered over Anne Choi’s backyard, engaged in what appeared to be a drill ahead of President Donald Trump’s visit three weeks ago to this tranquil town of farmland and horse barns in rural New Jersey.

“My sheep were terrified,” Choi, 44, said on Thursday inside her two-story barn a mile east of Trump National Golf Club, as half a dozen Shetland sheep grazed outside. “It’s awful. We don’t have the infrastructure here. We can’t support the weight of his presence.”

As Bedminster prepared this week for the president’s latest trip to the 600-acre (240-hectare) private club, a 17-day stay that is his first extended vacation in office, some of the town’s 8,000 residents expressed frustration at the security protocols, road closures and daily disruption that will begin with his arrival on Friday.

On Wednesday, the U.S. Secret Service said safety measures would also include a “tethered drone,” equipped with optical and infrared cameras and powered by a wire attached to a ground controller, that could impede on the privacy of nearby residences.

“It’s super creepy,” said Julie Henderson, an artist who lives down the road from Trump National, as two military helicopters roared overhead before circling and heading back toward the golf club.

The Secret Service said the drone would focus primarily on the outer perimeter and would not “physically intrude upon or disturb the use of private property outside the Trump National Golf Course.”

Trump’s movements can also lead to the closure of local roads and highways. Julie Henderson’s husband, Paul Henderson, said he has twice been stuck on an Interstate on his way to work while Trump’s motorcade used the highway.

Not everyone in this town about 40 miles (60 km) west of New York City agrees Trump’s visit will be a nuisance. Steve Desiderio, who owns a restaurant and catering business in Bedminster’s modest downtown, said the influx of federal agents and journalists would be a welcome boost to his business.

Desiderio, a 48-year-old Trump supporter, added that complaints about the disruption were overblown and media-driven.

“It’s just fake news,” he said, echoing one of the president’s favorite phrases. “They try to spin it like it’s gridlock. So there are five more cars at the stoplight?”

“It’s really been a big non-event,” he said.

Some residents said Trump has been a generous neighbor in past years, allowing local events to be hosted at his club. As in previous years, the township committee held its annual reorganization meeting in 2017 at Trump National, where Parker was selected to continue as mayor.

While Trump’s visit may help the town’s eateries, it will shut down the local airport, where 110 private planes and 60 flight school students will be grounded from Aug. 4 to Aug. 20.

“Our summertime is our busiest time,” said Somerset Airport President Chris Walker, as a Coast Guard helicopter landed on the runway in preparation for the weekend. “We’re just rolling with the punches.”

About half of the planes were being moved to other airports outside the 10-mile (16-km) no-fly zone, Stewart said. Some workers will be sent home until Trump returns to Washington.

Trump has also drawn local protesters, both for and against him. Anti-Trump activists have been staging a weekly “People’s Motorcade,” driving slowly down the road past Trump National and honking their horns.

The town’s administrator, Judith Sullivan, said they were more of a distraction for her 16-member police department than the president, though they have largely been well behaved.

She hopes to recoup the $30,000 in overtime for officers working during Trump’s visit from the U.S. government.

Choi, who moved to Bedminster from Maryland two years ago, said she likely would not have chosen her house had she known the “summer White House” would be only a mile away.

“Even if you agree with his politics, I think we can all agree that this is not what we bargained for,” she said.