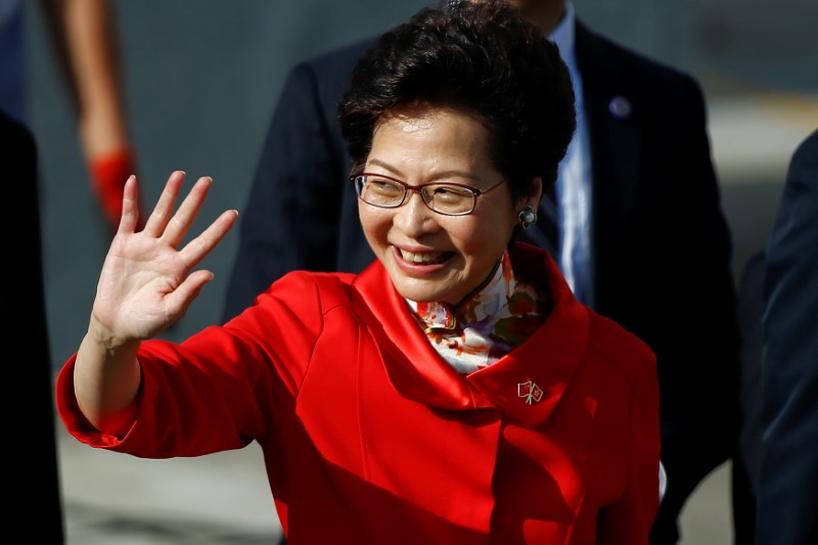 Minor scuffles broke out as pro-democracy activists, some with banners bearing the words “Democracy. Self determination”, and pro-Beijing groups taunted each other, with hundreds of police deployed on a traditional day of protest in Hong Kong.

Scores of democracy protesters were taken away by police, while several pro-China groups remained, cheering loudly and waving flags as though in victory.

Britain returned Hong Kong to Chinese rule on July 1, 1997, under a “one country, two systems” formula which guarantees wide-ranging autonomy and judicial independence not seen in mainland China.

The organisers of a pro-independence rally, claiming that Hong Kong had now in effect become a repressed Chinese colony, called off their plans for a protest on Friday night at the last minute because of what they said was heavy police pressure.

Beijing-backed civil servant Carrie Lam was chosen to be Hong Kong’s next leader in March by a 1,200-person “election committee” stacked with pro-China and pro-establishment loyalists.

On Saturday, hundreds of people gathered outside the same harbour-front venue where two decades earlier, the last colonial governor, Chris Patten, tearfully handed back Hong Kong to Chinese rule at a rain-soaked ceremony.

“I request you to remain calm and cooperate with the police,” a police officer shouted into a loud hailer.

Xi’s visit comes amid heightened tension between China and Hong Kong. Hong Kong’s pro-democracy activists have been protesting against what they say is China’s growing encroachment on the city’s freedoms in a breach of the “one country, two systems” arrangement that is supposed to grant a high degree of autonomy to Hong Kong.

[For a link to Reuters handover stories, reut.rs/2sje26J]

Beijing’s refusal to grant universal suffrage to Hong Kong, however, triggered nearly three months of street protests in 2014 and growing calls for independence for the city, in what many observers see as the most tumultuous post-handover period seen in Hong Kong .

Xi conceded on Friday the city’s “one country, two systems” formula faces “new challenges” but that it shouldn’t be handled with an “emotional attitude”. [nL3N1JR41U]

Upwards of one hundred thousand protesters are expected to take to the streets for an annual march in the afternoon to mark the 20th anniversary of the handover.