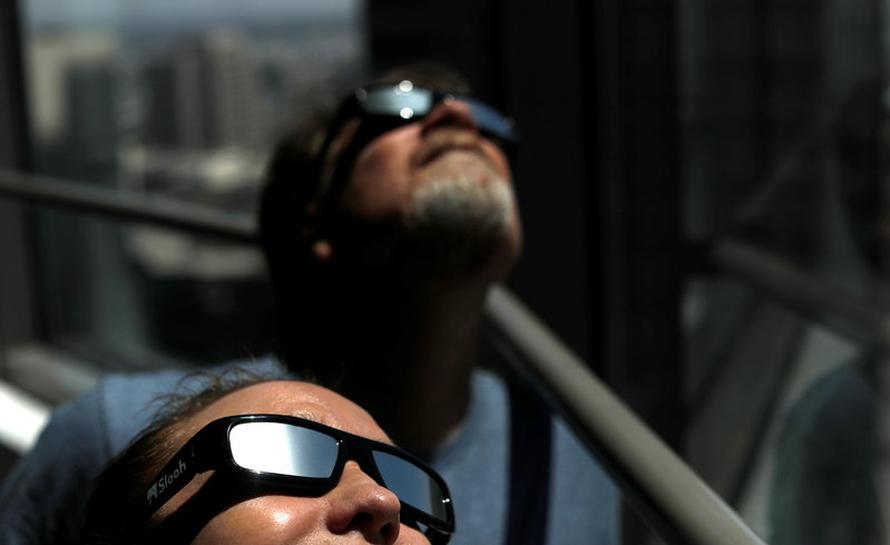 (Reuters) – Michael Zeiler packed his portable toilet then headed out on a 10-hour drive from New Mexico to Wyoming where, on Monday, he intends to mark the ninth time he has seen the moon pass in front of the sun in a total solar eclipse.

Zeiler is a self-described “eclipse chaser,” part of a group of avid astronomy buffs, telescope hobbyists and amateur photographers whose passion for such celestial events takes them to the far corners of the earth.

For the first coast-to-coast total solar eclipse in the United States in almost a century, and the first visible anywhere in the Lower 48 states since 1979, Zeiler had only to drive some 650 miles (1,046 km) from the desert Southwest to the Rockies.

He showed up prepared and early on Wednesday at his destination in Casper, Wyoming, within the “path of totality,” the corridor over which the moon’s 70-mile-wide shadow will be cast as it crosses the United States over 93 minutes.

Along that path at the height of the eclipse on Aug. 21, the sun will be completely blotted out except for its outer atmosphere, known as the corona.

Zeiler, 61, is a full-time cartographer for a Santa Fe software company and part-time evangelist for the upcoming solar-lunar show, using the website greatamericaneclipse.com that he developed with his wife, Polly White, 54.

“This will be the most amazing event you have seen in your life,” said Zeiler, who has traveled the world since the early 1990s to experience the darkening of the sky, the sun’s “diamond ring” effect at the moment before totality, its glowing corona and the emergence of stars in daytime.

Zeiler and White are ready to change plans if their research the day before the eclipse shows clouds or smoke are likely to obscure skies in Casper.

“We’re not only packing to be sure we’re self-sufficient but also mobile,” White said. “If we need to move a couple hundred miles in one direction, we’ll do it.”

In addition to their portable toilet and ample supplies of food and water, they brought along sleeping bags and tents, which give them flexibility to change venues.

Zeiler, a member of a task force assembled by the American Astronomical Society to provide input on the event, will be one of millions of people to catch a rare glimpse of a total eclipse. Millions more across the United States will be able to see a partial eclipse, weather permitting.

“You have two bittersweet emotions right after the eclipse ends: giddiness from the sheer beauty of it and regret that it’s over. And the only question you have in that moment is, ‘Where and when is the next one?'” he said.

For a graphic on the Solar eclipse in 2017 click on this link tmsnrt.rs/2wdOEB9