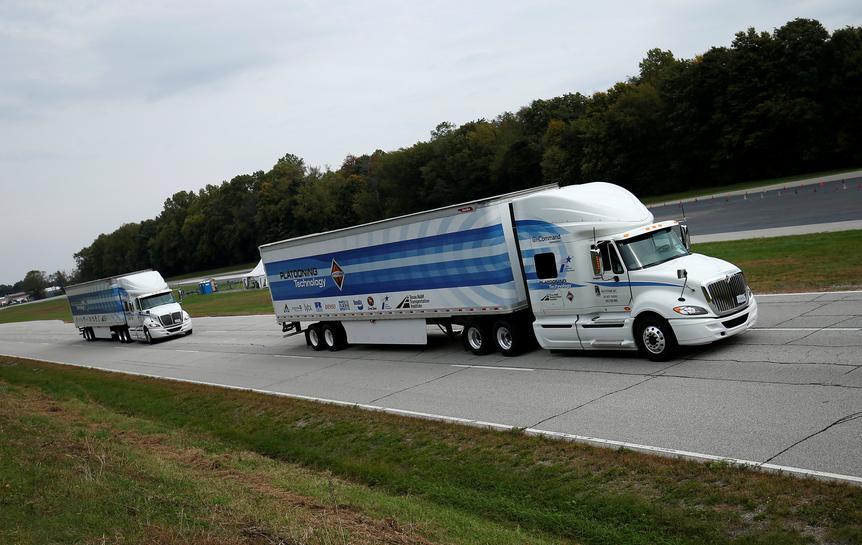 LONDON (Reuters) – Britain will begin trials of semi-automated, wirelessly connected truck convoys on public roads by the end of 2018, in a bid to find more fuel-efficient ways to transport goods.

Development of the technology has already started elsewhere in Europe and the United States. In April 2016, semi-autonomous trucks drove from factories in Sweden and Germany to the Dutch port of Rotterdam in early trials.

The UK government said funding of 8.1 million pounds ($10.4 million) would enable so-called platooning trials where a lead truck driven manually controls the acceleration, braking and steering of two others behind.

All the trucks would have a driver ready to take control if necessary.

Platooning is seen as more efficient as the first truck in the convoy reduces air resistance for the vehicles behind it.

“Advances such as lorry platooning could benefit businesses through cheaper fuel bills and other road users, thanks to lower emissions and less congestion,” Transport Minister Paul Maynard said.

“But first we must make sure the technology is safe and works well on our roads, and that’s why we are investing in these trials.”

However, Edmund King, President of the Automobile Association (AA) set up to help motorists, said British roads were not suitable for large-scale convoys.

“This is not America, we do not have massive freeways like in Nevada and Arizona where you’ve got long stretches of road that are pretty open,” he told BBC Radio.

“If you look at the UK, we have more entrances and exits to our motorways and they are much more congested.”

King tweeted that the investment would be better spent electrifying heavy goods vehicles.