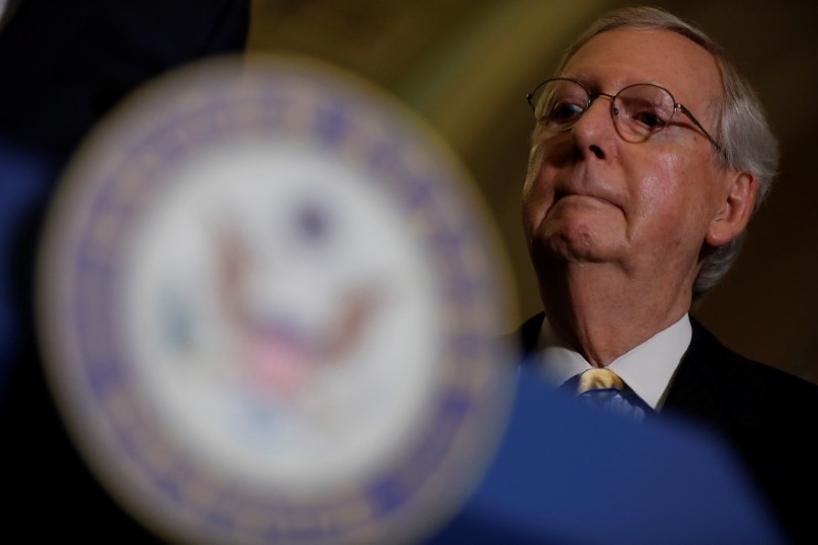 Republican leaders hope to agree on changes to the legislation by Friday so lawmakers can take it up after next week’s Independence Day recess.. Senate Majority Leader Mitch McConnell on Tuesday abandoned plans to seek passage of it this week because Republicans did not have 50 votes to pass the bill.

For seven years, Republicans have led a quest to undo the 2010 law known as Obamacare, Democratic former President Barack Obama’s signature legislative achievement. Trump made dismantling it a top campaign promise during last year’s presidential campaign but policy differences within the party have raised doubts Republicans can achieve a repeal.

Democrats have unified against the bill and Republicans control the Senate by a slim 52-48 margin, which means McConnell can afford to lose only two Republicans. So far at least 10 – including moderates and hard-line conservatives – have expressed opposition to the current bill, although some indicated they would vote for it with certain changes.

McConnell, with his reputation as a strategist on the line, met with a procession of Republican senators in his office on Wednesday. John Cornyn, the No. 2 Senate Republican, said party leaders will talk to every Republican senator who has concerns about the bill or is undecided.

The House of Representatives passed its healthcare bill last month, only after striking a balance between the center of the party and the right wing. Now McConnell must find a similar sweet spot.

During a lunch meeting on Wednesday Republicans made presentations on potential fixes. Senator Rand Paul called for jettisoning more parts of Obamacare to get conservatives on board.

Senator Mike Rounds suggested keeping a 3.8 percent Obamacare tax on high earners’ investment income, which the current bill would eliminate. Rounds said the tax could pay for more Americans to receive the tax credits that help pay for health insurance.

Senator Bob Corker, who also supports keeping the tax, said one of the issues he was focused on was helping lower-income Americans pay for health plans.

“My sense is there’s a good chance that issue and other issues people are trying to get addressed can be addressed,” Corker told reporters.

Trump said the bill was moving along well and predicted a “great, great surprise” but did not elaborate.

Maine Senator Susan Collins, a moderate, said it would be “very difficult” to reach agreement by Friday. Collins and other centrists were put off by the nonpartisan Congressional Budget Office’s projection on Monday that 22 million people would lose medical insurance under the existing bill.

Finishing the legislation’s revisions by Friday would be “optimal,” Cornyn said, so the CBO can analyze the new version..

Even then, Democrats could mount a forceful resistance. They have repeatedly said they will not discuss a repeal but have expressed openness to negotiating improvements.

The Senate’s top Democrat, Chuck Schumer, proposed Trump call all 100 senators to Blair House across the street from the White House to craft a bipartisan bill fixing Obamacare but Trump said did not think Schumer’s offer was serious.

McConnell said Democrats had refused “to work with us in a serious way to comprehensively address Obamacare’s failures in the seven years since they passed it.”

The legislation has triggered protests at the Capitol and police said they arrested 40 people, including cancer survivors, on Wednesday for blocking Senate offices.

The Senate bill rolls back Obamacare’s expansion of the Medicaid government insurance for the poor and cuts planned Medicaid spending starting in 2025. It also repeals most of Obamacare’s taxes, ends a penalty for not obtaining insurance and overhauls subsidies that help people buy insurance with tax credits.

For graphic on who’s covered under Medicaid, click: tmsnrt.rs/2u06kvB

(This story fixes attribution of quote in 10th paragraph to Senator Corker from Senator Rounds.)