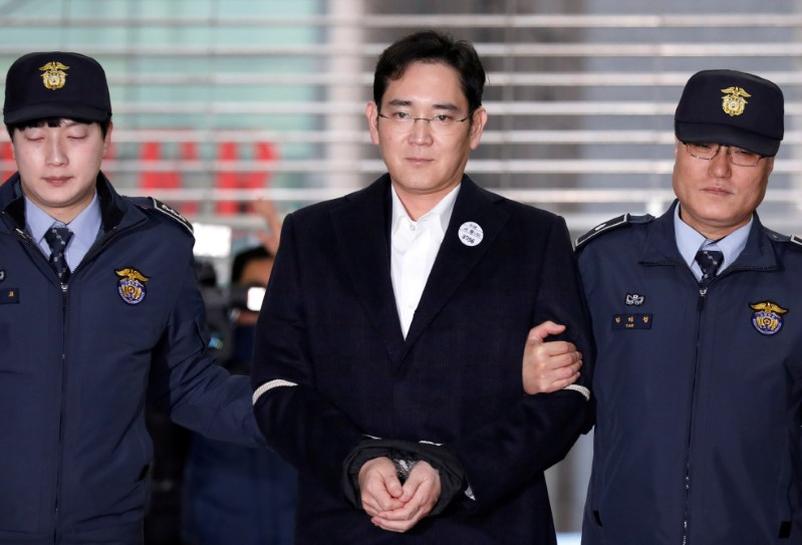 SEOUL (Reuters) – A South Korean court will rule on Friday on corruption charges against Jay Y. Lee, the billionaire head of Samsung Group, after a six-month trial in a nationwide bribery scandal that triggered the dismissal from office of the country’s president.

Lee, the 49-year-old heir to one of the world’s biggest corporate empires, has been held since February on charges that he bribed then president Park Geun-hye to help secure control of a conglomerate that owns Samsung Electronics, the world’s leading smartphone and chip maker, and has interests ranging from drugs and home appliances to insurance and hotels.

Prosecutors have demanded a 12-year jail sentence for Lee, who also faces charges of embezzlement and perjury – potentially the longest prison term given to a South Korean business leader.

The third-generation de facto head of the powerful Samsung Group, Lee has effectively directed operations since his father, Lee Kun-hee, was incapacitated by a 2014 heart attack.

Some investors worry that a conviction and long jail term could leave a leadership vacuum, with no one to take the big decisions at Samsung, which has over five dozen affiliate companies and assets of 363.2 trillion won ($322.13 billion). Its listed companies make up around 30 percent of the market value of South Korea’s KOSPI stock index.

Whatever Friday’s verdict, lawyers expect an appeal which could go all the way to the Supreme Court, with a final ruling probably next year.

Prosecutors have said Samsung’s contributions to two funds backed by Park aimed to secure government support for a merger of two of its affiliates to tighten Lee’s grip on the conglomerate. Lee has denied wrongdoing, and his lawyers say the 2015 merger was done for business merits.

“TOO BIG TO JAIL”

Samsung, founded in 1938 by Lee’s grandfather, is a household name in South Korea and a symbol of the country’s dramatic rise from poverty following the 1950-53 Korean War.

But over the years, it has also come to epitomize the cosy ties between politicians and powerful family-controlled business groups – or chaebols – which have been implicated in a series of corruption scandals.

South Koreans, who once applauded the chaebols for catapulting the country into a global economic power, now criticize them for holding back the economy and squeezing smaller businesses.

Investors say shares in chaebol firms trade at lower prices than they would otherwise because of their opaque corporate governance – the so-called ‘Korea Discount’.

“Chaebol leaders used to get the same sentencing every time, there was even a saying called the ‘3-5 law’ – three years sentencing, five years probation,” said Park Sangin, professor of economics at Seoul National University. “If Lee receives a heavy sentence, it can be seen as the shattering of the ‘too-big-to-jail’ trend of the past.”

Lee’s father was convicted of tax evasion in 2009, and had a 3-year sentence suspended, with judges citing his “contribution to the country’s economic development” and his “patriotism through business enterprise from job creation.” He was pardoned four months after the final ruling.

South Korea’s new president, Moon Jae-in, who replaced the disgraced Park after a May 9 election, has pledged to rein in the chaebols, empower minority shareholders and end the practice of pardoning corporate tycoons convicted of white-collar crime.

Lee’s trial has gripped the nation, and Friday’s closed courtroom verdict will be witnessed mainly by lawyers and Samsung officials. Around 30 members of the public will attend, having won seats through a lottery.

The ruling is expected to affect the verdict in Park’s own corruption trial, expected later this year, as prosecutors argued the two took part in the same act of bribery.

Prosecutors have also indicted top Samsung executives over the bribery scandal, including Choi Gee-sung, who headed the corporate strategy office, dubbed the ‘control tower’. It has since been disbanded, and Choi has resigned.

Experts were divided on how Friday’s ruling might go, with some lawyers expecting Lee to be found innocent on the major charges, saying much of the evidence at trial appeared circumstantial.