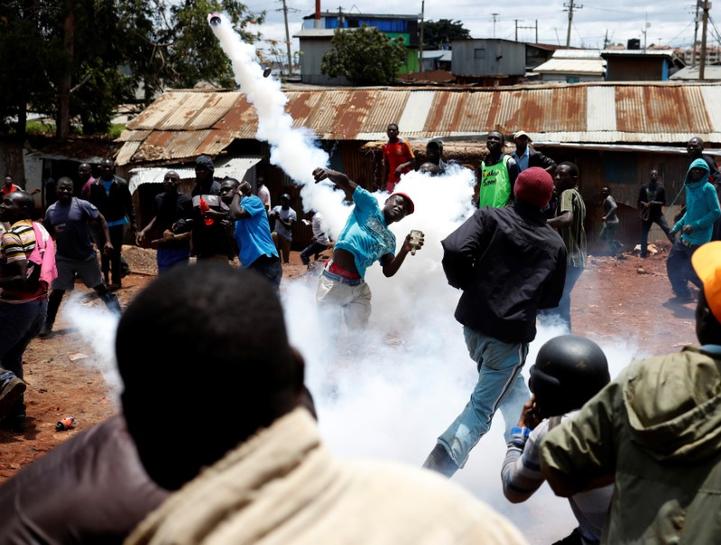 KISUMU, Kenya (Reuters) – Kenyan opposition supporters clashed with police and threw up burning barricades in pockets of the country on Thursday, seeking to derail an election rerun likely to return Uhuru Kenyatta as president of East Africa’s economic powerhouse.

Riot police fired tear gas in Kibera and Mathare, two volatile Nairobi slums. Protesters set fires in Kibera early in the morning, and in Mathare a church was firebombed.

Around 50 people have been killed, mostly by security forces, since the original Aug. 8 vote. The Supreme Court annulled Kenyatta’s win in that poll on procedural grounds and ordered fresh elections within 60 days; but Odinga called for a boycott because, he said, the poll would not be fair.

The repeat election is being closely watched across

s East Africa, which relies on Kenya as a trade and logistics hub, and in the West, which considers Nairobi a bulwark against Islamist militancy in Somalia and civil conflict in South Sudan and Burundi.

While tensions simmered in opposition strongholds, other areas were calm. In the capital, polling stations saw a sprinkling of voters instead of the hours-long queues that waited in August.

The police said there had been isolated incidents of violence in five out of 47 counties, including a man shot dead in Homa Bay County.

Interior minister Fred Matiang‘i told Citizen TV that polling stations opened in 90 percent of the country, including Kiambu, where Kenyatta cast his ballot.

“We are requesting them (voters) humbly that they should turn out in large numbers,” Kenyatta, the U.S.-educated son of Kenya’s founding father, Jomo Kenyatta, said after voting. “We’re tired as a country of electioneering and I think it’s time to move forward.”

A decade after 1,200 people were killed over another disputed election, many Kenyans feared violence could spread.

If some counties fail to hold elections, it could trigger legal challenges to the result, stirring longer-term instability and ethnic divisions.

On Wednesday, the Supreme Court was due to hear a case seeking to delay the polls. But it was unable to sit after five out of the seven judges failed to show up, fuelling suspicions among opposition supporters.

“The lack of a quorum is highly unusual for a Supreme Court hearing,” a statement from the European Union said. “Not hearing this case has de facto cut off the legal path for remedy.”

In Kisumu, the scene of major ethnic violence after a disputed election in 2007, many schools designated as polling stations were padlocked. Young men milled about outside.

In Kisumu Central, constituency returning officer John Ngutai said no voting materials had been distributed and only three of his 400 staff had turned up. One nervous official said his election work was a “suicide mission”.

Kisumu businessman Joshua Nyamori, 42, was one of the few voters brave enough to defy Odinga’s stay-away call but could not cast his ballot.

“Residents fear reprisal from political gangs organized by politicians. This is wrong,” he said.

In the coastal city of Mombasa, protesters lit tyres and timber along the main highway. Reuters contacted 18 polling stations there, and the highest voter turn-out any of them had registered at midday was 27. Four armed police were on guard at each station – double the number on duty last time.

“We have seen you, we know you and we have marked you,” a group of opposition supporters, shouted at two voters outside a polling station.

Yvonne Mwenesi, 21, was beaten outside another polling station before police rescued her.

“I had just voted and as I walked out, a group of men who I know attacked me saying I had betrayed them by voting,” she said, her nose bleeding.

On the eve of the vote, Odinga backed off previous calls for protests and urged supporters to stay home.

“We advise Kenyans who value democracy and justice to hold vigils and prayers away from polling stations, or just stay at home,” he said in English.

Speakers who preceded him urged in the KiSwahili language that supporters should ensure the vote did not take place.

Odinga’s National Super Alliance coalition, whose supporters attacked polling staff in the run-up to the vote, could argue in court that the lack of open polling stations shows that the re-run is bogus. The Supreme Court said it would annul this election too if it did not meet legal standards.

The head of the election commission said last week he could not guarantee a free and fair vote, citing political interference and threats of violence. One election commissioner quit and fled the country. Another election official was tortured and murdered days before the Aug. 8 vote.

Kenya’s Election Observation Group, a coalition of civil society organizations, said an observer in Mombasa was beaten up and one in Kibera prevented from leaving the house.

They did not send observers to western Kenya over security fears, they said. In other places, 80 percent of the 766 polling stations they were observing opened on time.