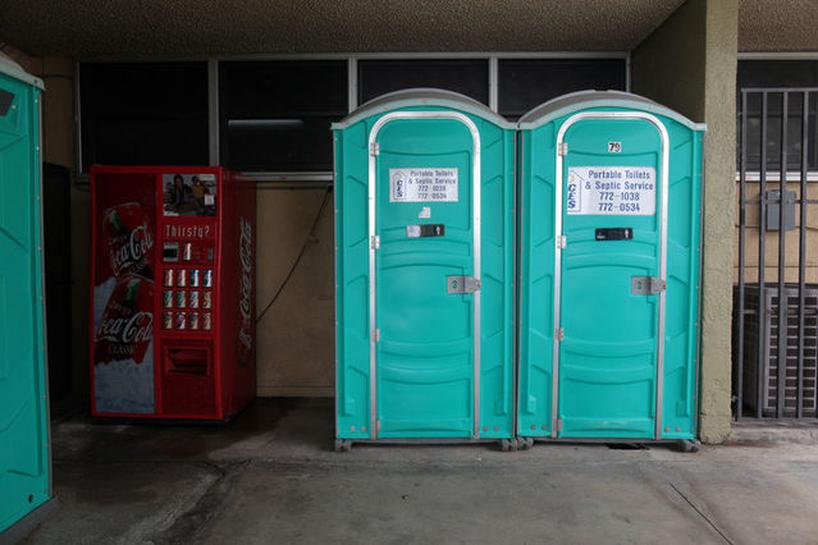 ST. CROIX, V.I. (Reuters) – For a glimpse at the precarious financial health of this Caribbean island, visit its public hospital.

Pipes underneath the emergency room collapsed in May, causing waste water to back up through the drains. Now workers and visitors – even patients – use portable toilets set up on the sidewalk. The hospital doesn’t have the cash for new plumbing.

For years the U.S. Virgin Islands funded essential public services with help from Wall Street. Investors lined up to purchase its triple-tax-exempt bonds, a form of debt free from municipal, state and federal taxes.

Now the borrowing window has slammed shut. Trouble in neighboring Puerto Rico, which recently filed for a form of bankruptcy after a string of debt defaults, has investors worried that the U.S. Virgin Islands might be next.

With just over 100,000 inhabitants, the protectorate now owes north of $2 billion to bondholders and creditors. That’s the biggest per capita debt load of any U.S. territory or state – more than $19,000 for every man, woman and child scattered across the island chain of St. Croix, St. Thomas and St. John. The territory is on the hook for billions more in unfunded pension and healthcare obligations.

“We have a government that we can’t afford, and now all of it is converging,” said Holland Redfield, a former six-term U.S. Virgin Islands senator who hosts a radio talk show about politics in the territory. “We’re getting to the point where we may have a potential meltdown.”

Ratings agencies have downgraded the islands’ credit ratings deep into junk territory. With the U.S. Virgin Islands shut out of the credit markets after a failed January bond issue, officials are scrambling to stabilize its finances after years of taking on debt to plug yawning budget holes.

The government proposes to slash public spending by 10 percent. It recently hiked taxes on liquor, cigarettes, sugary drinks and vacation timeshares. And it has threatened to auction homes and businesses of property-tax deadbeats.

Governor Kenneth Mapp is quick to reassure bondholders that they get first crack at one of the territory’s largest funding sources: rum taxes. The money pays debt service before heading to government coffers, a protection called a lockbox.

The U.S. Virgin Islands has “never been late on a payment, much less defaulted on a bond or loan agreement,” Mapp said during his State of the Territory address in January.

But how these islands will recover from years of budget deficits and a severe liquidity crisis remains to be seen. The territory lost its single-largest private employer five years ago when a refinery shut down. Gross domestic product has declined by almost one-third since 2008. At times this year the government was operating with just two days’ cash on hand.

At the Juan F. Luis Hospital and Medical Center, plumbing troubles are just the beginning. Doctors have stopped performing some vital procedures, including implanting pacemakers and heart defibrillators, because the facility can’t pay suppliers for the devices, officials say.

“We have gone from bad to worse, and the patients are the ones who are suffering,” said Dr. Kendall Griffith, an interventional cardiologist who recently left the island to take a job in a Georgia hospital. “It’s forcing physicians to make hard decisions.”

Before Puerto Rico imploded under $70 billion in debt and $50 billion of unfunded pension liabilities, few in Washington noticed troubles brewing in the other inhabited U.S. territories of American Samoa, Guam, the Northern Mariana Islands and the U.S. Virgin Islands.

Residents of these places are U.S. citizens, but they can’t vote in presidential elections and their Washington delegates are non-voting figureheads. Despite high poverty rates and joblessness, the territories receive just a fraction of the federal funding allocated to U.S. states for entitlements such as Medicare and Medicaid.

To bridge the gap, some have turned to the bond market. Bond issues typically fund infrastructure and capital projects. But in the case of Puerto Rico and the U.S. Virgin Islands, officials increasingly relied on borrowed money to fund government operations.

A nurse pushes a patient in a wheelchair through a hall of the Juan F. Luis Hospital and Medical Center in Christiansted, on the outskirts of St Croix, U.S. Virgin Islands June 29, 2017.Alvin Baez

Debt loads for both territories have grown to staggering proportions, now surpassing 50 percent of their respective GDPs. That’s higher than anywhere in the nation and sharply above the state median of 2.2 percent, Moody’s Investors Service found.

(For a graphic on U.S. territory debt, see: tmsnrt.rs/2h8TGIo)

Bond buyers for years whistled past the territories’ shaky finances, comforted in the knowledge that these governments couldn’t seek bankruptcy protections available to many municipalities.

“There was an idea that because of the lockbox structure and the fact that the territories did not have a path to bankruptcy, they had to pay you,” said Curtis Erickson, San Francisco-based managing director of Preston Hollow Capital, a municipal specialty finance company.

That all changed in 2016 when Congress passed legislation known as PROMESA giving Puerto Rico its first access to debt restructuring. The move sparked a ferocious battle among creditors to see who would shoulder the largest losses.

Investors quickly surmised the U.S. Virgin Islands might pursue the same strategy. In December, S&P Global Ratings downgraded the territory by a stunning seven notches to B from BBB+, putting it well below investment grade.

The U.S. Virgin Islands is adamant that S&P and other ratings agencies overreacted. The territory has been unfairly “tainted by Puerto Rico’s pending bankruptcy,” and has no intention of pursuing debt restructuring, said Lonnie Soury, a government spokesman.

In addition to tax hikes and budget cuts, he said the current administration is looking to do more with its tourism and horse racing industries to boost development.

In the meantime, the U.S. Virgin Islands is trapped in a circle of hock that’s making it tough to maneuver.

The government and its two public hospitals, for example, owe a combined $28 million to the territory’s water and power authority, known as WAPA. In turn, WAPA owes about $44 million to two former fuel vendors.

Then there’s the $3.4 billion of unfunded liabilities for public pensions and retiree healthcare. The pension fund is 19.6 percent funded and projected to run out of money by 2023.

Pensioners can wait months before their annuities start, because the government is behind on its contributions. St. Croix resident Stephen Cohen, 67, said it took almost a year after he retired as a high school biology teacher before he received his first check in 2016.

“A lot of people are financially stressed,” Cohen said. “They didn’t realize how bad things would get.”

Territory officials can’t say how they will close a projected $100 million budget shortfall for this fiscal year. That’s on top of an accumulated net deficit of $4.4 billion, according to government financial records.

Back at Juan F. Luis Hospital, officials hope to move the emergency room into the cardiac wing so repairs can begin on the collapsed pipes.

The government has pledged $3 million for the job, but Tim Lessing, the facility’s chief financial officer, wonders if he’ll see it.

“The territory is in a tough position,” Lessing said. “Nobody’s buying the paper.”