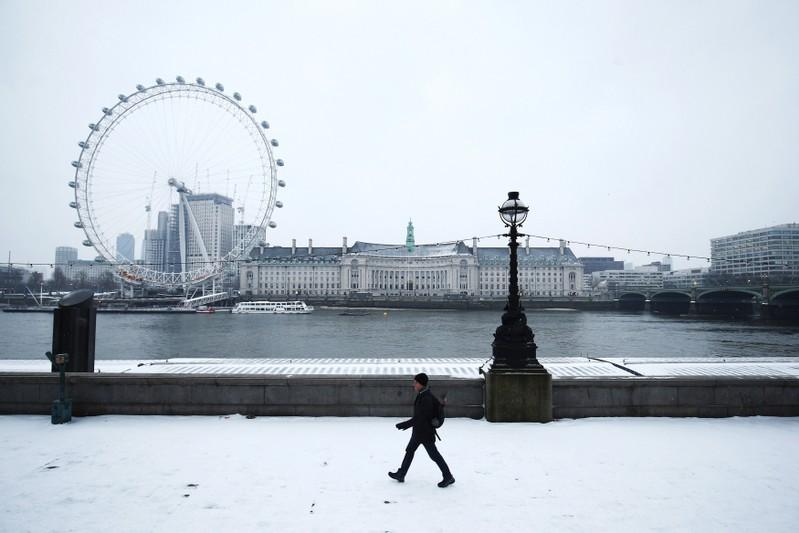 With up to 90 cm of snow and temperatures as low as minus 10.3 Celsius in Scotland, Britain and Ireland issued their most severe red warnings which advise people to stay at home as travel is too dangerous.

Dozens of people were trapped in their cars on the M80 motorway between Glasgow and Edinburgh, with several hundred having been standed on the road overnight. Flights and trains were canceled across both Britain and Ireland – with similar transport problems in continental Europe.

More freezing snowy weather was forecast as Storm Emma approaches from Portugal and France, with warnings of treacherous weather across southern England and Ireland.

Irish Prime Minister Leo Varadkar said people should remain indoors from 1600 GMT on Thursday until the storm, with winds forecast to reach 100 kph (60 mph), has passed.

“The risk to life and limb presented by the severe weather conditions should not be underestimated by anyone,” he said following a meeting of the National Emergency Coordination Group.“It is not safe to be outside in such conditions.”

All flights will cease from Dublin airport by 1600 GMT and the two carriers that use the airport, Aer Lingus and Ryanair, said they do not plan to fly from the airport at all on Friday.

Trains and planes were canceled across Britain and Ireland. Emergency services also struggled on what many consider to be the first day of the Northern Hemisphere’s Spring.

One doctor told Reuters that staff were snowed in at a hospital near Glasgow, and another doctor told the BBC of a surgeon colleague who walked almost three hours in the snow to the town of Paisley to perform a cancer operation.

Wholesale gas prices soared to their highest in at least 10 years on Thursday and the British power network regular, the National Grid, warned of a deficit in the market and sought to buy gas from market players to unblock bottlenecks.

The cold spell, dubbed the“the Beast from the East”, has been caused by a jump in temperatures high over the Arctic which has weakened the jet stream that brings warm air in from the Atlantic to Ireland and Britain.

Britain’s two busiest airports, Heathrow and Gatwick, both said that flights would be canceled. Police in Lincolnshire, eastern England, said that all roads were impassable.

A man walks through the snow on the Embankment in London, Britain, March 1, 2018. REUTERS/Henry Nicholls

Britain’s Met Office warned that freezing rain was likely across southern England as Storm Emma pushes northwards from Portugal and France, adding that it looked set to be the coldest spell in Britain since 1991.

In Scotland, there were widespread road closures and no trains running on the two main lines to and from England. Police were rescuing stranding motorists, and found a vulnerable man in what they described as“life threatening weather conditions”.

Both Edinburgh and Glasgow airports were closed. Some places in southern Scotland were under such heavy of snow, it affected funeral services in Hawick, near the border with England.

“The issue for digging the grave is getting into the burial ground, and we’ve had about 3 feet (90 cm) of snow here,” Ross Walsh of Robson’s Funeral Directors told Reuters.

Ireland was bracing for the biggest snow fall since 1982 with public transport halted and schools across the republic closed. The Irish stock market said it would close from midday on Thursday and remain closed all day Friday.

In Switzerland, Geneva airport closed for several hours and dozens of flights were canceled. Snow also disrupted road and rail traffic. France had its share of snow too, even on the beaches of the Riviera coast in the southeast.

The worst was in the south where hundreds of cars and trucks were stranded on the A9 motorway, a strip that links southern France and Spain. The airport in Montpelier was closed for a period overnight but partially reopened on Thursday.

Upwards of 15,000 homes along the Mediterranean were without power on Thursday morning, power network company Enedis said.

It also snowed across much of northern Italy overnight, bringing fresh disruption to a rail network already hard hit by heavy snow across the south at the start of the week.

Schools in Florence were ordered to shut, while heavy goods vehicles were banned from the roads in the north.

In the Netherlands, strong winds caused problems. At Amsterdam’s Schiphol airport, only two of the six landing strips could be used on Thursday morning. Authorities had to close sea barriers south of Rotterdam to protect shipping.