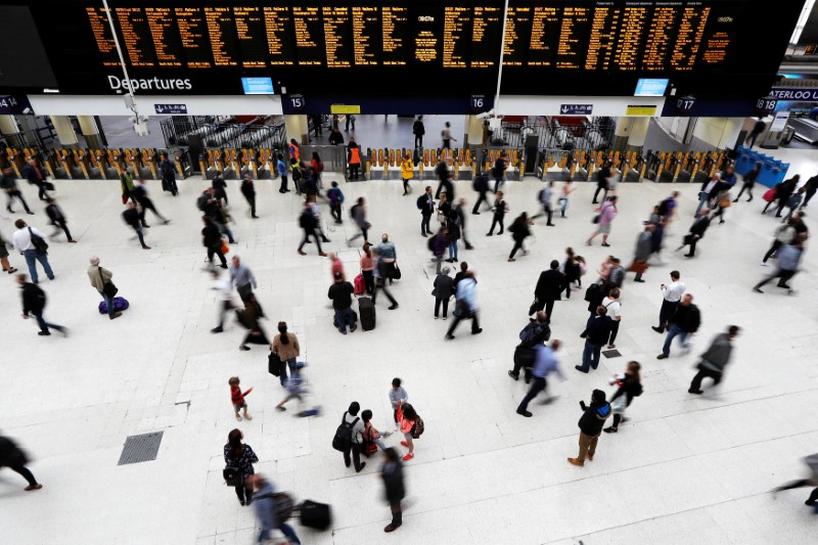 LONDON (Reuters) – Tens of thousands of London commuters travelling to Britain’s busiest rail station were stranded on Monday after a signalling fault brought services to a standstill.

Operator South West Trains advised passengers not to even attempt to travel into Waterloo and also cancelled trains on other parts of its network.

Those that did run suffered severe delays because of the fault in the Earlsfield area of the capital.

“We are now working to introduce a few trains back into circulation around the network however, we continue to strongly advise you not to travel towards London Waterloo until after 09:00 (0800 GMT),” the operator said in a statement.

It said trains would be disrupted for the remainder of the day and the problem could continue into Tuesday.

Rail fares in Britain are among the highest in Europe but passengers complain that many services are unreliable and overcrowded, with dated infrastructure.

Passengers walk past a screen warning of disruption on one of the main railway lines into Waterloo station in central London, Britain July 24, 2017.Peter Nicholls

Commuters using Southern Rail, another of the operators that serves the capital, have suffered more than a year of disruption because of strike action by drivers and other staff.

Waterloo, the London rail hub for services from southwest England and the south coast, handles some 100 million passenger journeys a year.

“It was packed, chaotic and lacking in information,” resource manager Alison Izzo, whose journey was delayed by an hour and a half, told Reuters at Waterloo.

Paul Wadey, 40, who works in public relations, said his commute had taken twice as long as usual.

“Some trains are cancelled and you have to wait for the next one and it’s full, and then you think do I wait for another one to get a seat or squeeze in and suffer the uncomfortableness,” he said.

South West Trains passengers are set to face severe disruption next month when work begins to extend platforms at Waterloo, meaning many services will not be running and some commuter stations will be closed altogether.

“Truth be told what happened this morning is paled into comparison when what happens next month when they cancel 50 percent of the trains and our journey into Waterloo takes 40 or 50 percent longer than it should,” Wadey said.