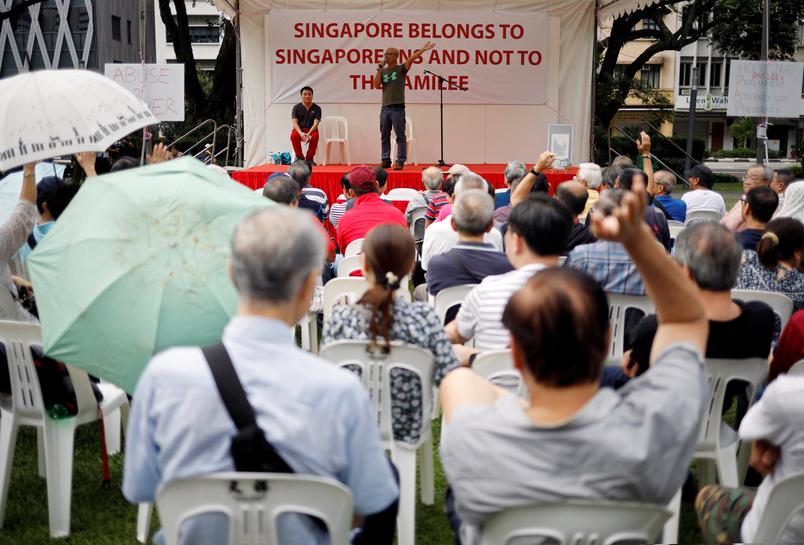 SINGAPORE (Reuters) – Around 400 protesters gathered at Singapore’s Speakers’ Corner on Saturday calling for an independent inquiry into whether Prime Minister Lee Hsien Loong abused his power in a battle with his siblings over what to do with their late father’s house.

The heirs of Lee Kuan Yew, Singapore’s long-serving first prime minister who died in 2015, are bitterly divided over whether to demolish the family home at 38 Oxley Road, or allow the government to decide if it should become a heritage site.

The public row in a family that stands at the heart of Singapore’s establishment raised uncomfortable questions in a city-state that prides itself on being a rock of stability in Southeast Asia.

Displays of dissent are rare, but the issue gave some people at Saturday’s rally ammunition to vent frustration over a family that has supplied two of Singapore’s three leaders since independence in 1965.

“Singapore belongs to Singaporeans, and not to the FamiLee”, read a large banner on the stage for the protest at Speakers’ Corner, a designated venue for people to air their views, located in a park near the city’s financial district.

By Singapore’s standards, the crowd of around 400 mostly middle-aged people was unusually large for an anti-government protest. The rally required the authorities’ permission to take place, but there was no visible police presence.

The mainstream opposition, which only holds a handful of seats in parliament, has made little political capital out of a controversy that has riveted Singaporeans since it erupted in mid-June.

But organizers of Saturday’s demonstration regarded a parliamentary debate earlier this month as a whitewash, after the prime minister declared that it had found no substantiated evidence to support his siblings’ allegations that he had abused his power.

“The recent case between Lee Hsien Loong and his siblings is not just a matter of Lee Kuan Yew’s will,” Osman Sulaiman, a businessman and political activist, told the crowd.

“There’s an allegation of abuse of power. And this allegation doesn’t come from any Tom, Dick or Harry. It came from the prime minister’s siblings, who are privy to information that is not available publicly,” Osman said to a smattering of applause and cheers.

The organizers want Singapore’s president to commission an independent inquiry, and some of the later speakers switched focus to an upcoming election for the presidency.

The government has reserved the election for candidates from the country’s ethnic Malay minority this time as none have held the post for decades. Critics say the move was designed to sideline anti-establishment candidates from the Chinese majority.

Singaporeans can speak on “any issue”, a police spokesperson told Reuters. “As long as the event does not cause racial or religious enmity or pose any law and order risks.”

For now, Lee and his siblings have called a truce, in a fresh bid to settle the matter privately, though in their last public statement the siblings said they would divulge more evidence of abuse of power to an independent inquiry, if one was ever set up.

The younger brother Lee Hsien Yang, who owns the property, and sister Lee Wei Ling, who still lives there, want the house to be demolished in accordance with their father’s wishes, rather than become a shrine to a political dynasty.

(This version of the story fixes typo in paragraph 14)